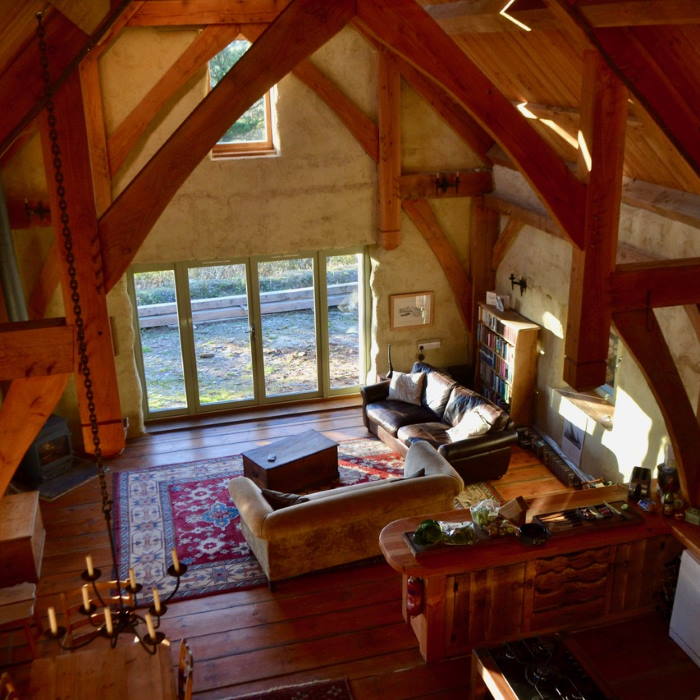 Architect, educator and builder, Tom Woolley, takes us through some of the natural construction materials we should be using to build healthier homes.

Tom is a returning guest to the podcast, with hempcrete being the subject of his previous interview.

Now, he has a new book: Natural Building Techniques – A Guide to Ecological Methods and Materials, and it is topics within that which we have been discussing with him. His book includes sections about renovating and retrofitting, information about suppliers, and different kinds of natural materials that are available. It also looks at some recent case studies, talks about how to tackle projects, and what some of the obstacles might be that you could come up against.

Tom explains that for a long time people have been given excuses about why natural materials are too expensive or don't work, which has acted as a barrier to their take-up.

However, in recent years, a lot of work has been done to make the supply chains more robust, with greater availability and, in some cases, cheaper pricing. This in turn has encouraged more people to try them.

Tom also believes that new fire and thermal performance regulations will make it harder for plastic and synthetic insulation companies to fabricate results, and composite materials like hempcrete will be shown to be just as good.

The term that is generally used for natural materials is bio-based materials, which covers anything from timber and straw, to hemp, sheep's wool, and other natural fibres. Closely linked are also things like earth and lime.

When it comes to the sustainability of using natural products, Tom addresses the current problems with timber.

“There's enormous amount of wastage of timber really. Timber is used in many situations, where it probably isn't needed to the extent that it is, but people just chuck it in as though it's a cheap material, which it no longer is.”

He also says that there is a lot of misinformation around the flammability of cross-laminated or mass timber construction, which has resulted in people returning to use concrete.

We do though need to be careful and responsible in our use of timber, and Tom explains that there are companies in the UK that are constructing using locally harvested roundwood poles, which is a great way of using timber more responsibly and economically.

Tom also suggests that there are many more resources that remain untapped, for example the biomass waste from palm oil trees could be used for bio-based composite products.

Lime and clay can be great alternatives to cement

Tom has been working with lime for a number of years and says that it is a natural biocide which is very good for healthy buildings. It does however still use energy to produce it, so he is now experimenting with a clay powder that seems to work almost the same as the lime, and which would save a great amount of embodied energy.

Stone is a natural material that can be re-used and Tom is horrified when he sees sites being bulldozed and the stone being buried, when there are far greater benefits with the many other ways it could be used.

While cob and rammed earth have plenty of advocates, using these materials alone it can be hard to reach modern standards of energy efficiency. However, they are hygroscopic and have health-giving properties that make them a very good material to use.

Tom is a great believer in hybrid construction these days, and building with timber, sheep wool, earth, hemp and all sorts of other things, depending on what's available and how they can be combined together.

Straw can be tricky if you don't know what you're doing!

Tom admits that he's not the biggest fan of using straw as a construction material, largely because he's seen so many straw bale disasters!

People often think because straw bales are relatively inexpensive, then it must be cheap to build a straw bale house and anyone can do it. However, there are a number of pitfalls, such as when you have a roof resting on the walls you need to factor in that bales are going to move, their suitability in very wet conditions, and having to be extremely well rendered and plastered to make them safe from fire.

He has however seen some wonderful examples, particularly when the straw bales are used as infill within a timber frame, rather than being load-bearing.

If you are looking to build with straw, Tom recommends getting experience first on another project so that you know what's involved, and preferably attend a training course run by experts.

Hempcrete is an excellent material for managing moisture in a building

This would always be Tom's preferred method of building, used as 300-350mm walls within a timber frame construction. It has an impressive thermal performance and also creates a very healthy environment because of its hygroscopic properties.

Over the last year, they have had a study done by the University of Ulster on one of their hempcrete buildings. Despite temperature and humidity levels varying greatly throughout that time, the relative humidity stayed exactly the same.

It is also very versatile in its application. It can be mixed in a mixer and cast in shuttering, it can be sprayed into a building, and it can also come in block form.

Hemp is readily available for use in construction, with more growers jumping on the bandwagon of bio-based materials for company carbon off-setting. It is a useful crop for farmers because it's used in the annual rotational cycle between cereal crops such as barley and wheat. The fibre is stripped from the hemp and this in itself becomes extremely valuable. The hemp fibre can be used in a variety of insulation products or composites, including car interiors and replacing plastic in aeroplanes.

He suggests that by being more tactical and not making a song or dance about it, you're less likely to have a problem. He gives the example of a small company in Wales who have just sold a trial hempcrete house, which got a mortgage from Nationwide Building Society without them batting an eyelid.

“It's no good just saying, Let's insulate it”

With his book, Tom is keen to educate even some of the green movement who emphasise the importance of insulating all the buildings in Britain, while effectively promoting the use of petrochemical insulation materials.

He accepts that there will always be some things that can't really be made out of anything other than plastic, and if they're used in a sparing and limited way then that's something that shouldn't be condemned. However, he takes issue with some of the Passivhaus organisations for promoting materials that are plastic and synthetic oil based, which they are claiming will help to save the planet by reducing energy. When 50% of the plastic waste going into the oceans is from the construction industry, Tom questions why they need to be wrapping buildings in plastic membranes, when we can build airtight buildings with hempcrete that are fully breathable and aren't wrapped in plastic.

Tom sees Active House as having a more holistic and sensible approach to these issues, particularly around the design and configuration of buildings, use of daylight, passive solar etc. The Active House Alliance has recently been set up in the UK and certification will be offered in the future.

Tom is keen to see far greater investment in building/material performance data, but says that while organisations such as Innovate UK have thrown money at petrochemical solutions, they haven't been as supportive of natural and bio-based approaches.

There are however some very good centres of research that are being set up, such as at the University of Suffolk. Tom has also been in discussion with Cardiff University about doing some testing on further hempcrete houses that are being built in Wales.

Research in the UK and around the world shows that issues around mould are another big challenge that needs to be faced, even for properties that have been renovated. But there are now many in the medical community that are recognising the environmental causes of health problems, such as VOCs, formaldehyde etc. Tom sees natural materials as being the solution to get out of these problems, and this is likely to be one of the main directions of his work in the coming years.

Find out more about Natural Building Techniques: A Guide to Ecological Methods and Materials

Download a transcript of the interview with Tom Woolley