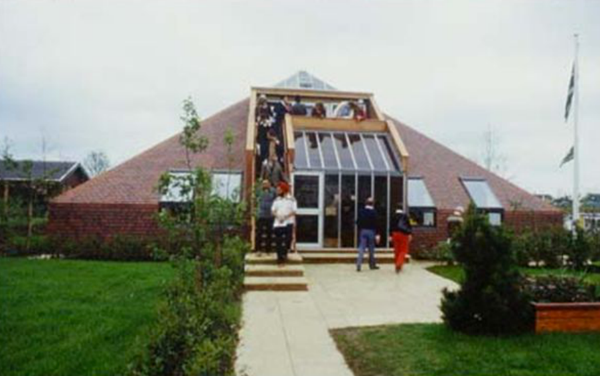 What Impact Did The Homeworld Exhibition of 1981 Have? (Home World, Milton Keynes)

On a recent podcast I mentioned that I had discovered the Homeworld exhibition of 1981. I did stumble into this. I thought I was going to visit a house that was built in the 1980s that had now been retrofitted to high energy efficiency. Instead I was checking out an original eco home which was part of the Homeworld exhibition. For me, this was fascinating: it was a tool to travel back in time, get a snapshot of what was going on and then return to the present, over 30 years later, for analysis.

When I recorded the podcast I thought I might be able to link to material that's already been written about Homeworld, but of course the event pre-dates the Internet so there is very little available online. That's why I paid a visit to the Milton Keynes Discovery Centre to open their files and have a few more facts at hand.

To give you a quick overview, Milton Keynes is one of England's new towns that came about as a way to address housing shortages in London in the 1960s. Designated on an area 89km2, it brought together existing towns and villages within its boundary and had a target population of 250,000 (which is roughly the size of the borough today). A lot of the initial development was publicly-funded and so one of the aims of the Homeworld exhibition was to establish Milton Keynes as the perfect place for private sector investment. In this respect the Milton Keynes Development Corporation, responsible for the vision and execution of the new city, considered the exhibition to be a success. It opened in a wave of publicity and was visited by 140,000 people in May 1981 and many more in the subsequent months.

A Showcase of Innovation

Here is how it was billed to the public leading up to the event:

HOMEWORLD brings the best and latest ideas for houses together for the first time in an exhibition village of full-scale homes. There are over thirty-five houses from twenty major developers from a variety of countries – Britain, Canada, Denmark, Sweden and New Zealand.

HOMEWORLD is your opportunity to see the latest developments in housing from international designers, architects and builders. Among the many innovations are homes with new shapes and styles; ideas to save energy (and money!); homes that can be built quickly; and homes that reduce maintenance costs.

There are low-cost starter homes for the first-time buyer, homes with sophisticated energy recovery systems, homes that arrive in containers and are erected in two or three days, homes that are pyramid or roof-shaped, homes made of wood and glass, homes using solar energy and homes from Denmark, Sweden, Canada and New Zealand.

The companies that took part were invited to build houses which ‘contain innovative features, either experimental or not yet in widespread use within the industry, which could become common features in the next decade. Innovations in design, construction, materials and equipment‘ were anticipated.

Three Houses Which Made Their Mark 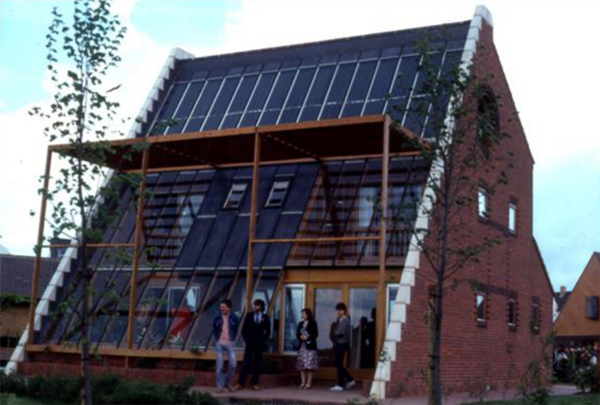 Radical in its look as well as its performance, a triple glazed conservatory on the south side acts as a solar trap while the garage and porch on the north side act as a thermal buffer (preventing heat loss through the exterior). All its main rooms face south. The kitchen, dining and living areas have a quarry tiled floor which collects heat during the day, preventing overheating, and then gives off that heat in the early evening as the room temperature falls. There is also a chemical heat store and solar panel array. 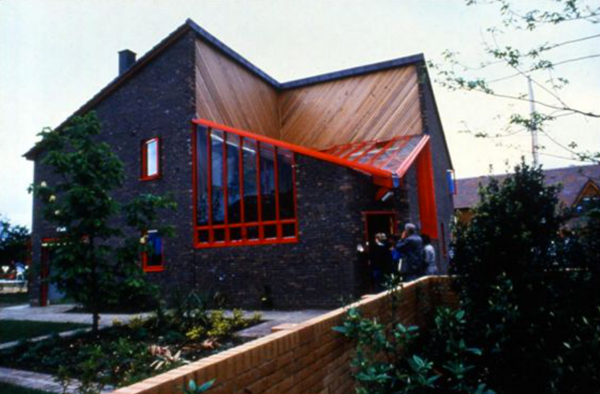 There was no doubt a lot of publicity surrounding this house due to its connection with the BBC's Money Programme, but it was not without innovations. This house harnesses the sun with passive solar gain from the special double glazing and conservatory, and also an active solar gain from the panels on the roof. Three different heating systems were tested. The Totem – total energy module – was an adapted car engine that became a propane gas-fuelled generator, able to supply enough energy for around 10 houses. The timber frame design made this house quick and easy to erect.

Distinct by its pyramid shape, this added to its ‘flexibility' (according to the literature!). It had a central spiral staircase and gained additional space from a basement. This house made use of high levels of insulation and passive solar gain with its south-facing double glazing and conservatory. It also had a ventilation system.

Why do we remember these houses?

I'm imagining these houses are significant because they did foresee the way things were going. There were energy issues in the 1970s and currently we face similar problems. It showed that energy efficiency was a logical path. Most of the 36 houses had very good levels of insulation. In fact, after the exhibition had closed these houses were put on the market and most people considered them a good buy because they knew they were buying something that was built well. A lot of modern housing developments in the UK are perceived to have poor insulation or limited design. Interestingly these houses had our best interests at heart – it would be nice to think that all housing could do that!

The ideas that have become more established include:

Not a Radical Change But a Step Forward

In conclusion, this exhibition did have an impact but perhaps not the radical shake-up that could have followed. These buildings illustrated how to save energy and it was not unrealistic of the exhibition organisers to envisage some of these features becoming commonplace within ten years. However, it's taken much longer and even now building regulations are way off the pace.

Even if the regulations didn't enforce tougher requirements on the building's fabric, homeowners could have demanded it. Unfortunately I quite often hear from people working in the industry today that their clients don't like spending money on insulation because they can't see it. Far better to do the minimum and then install a better kitchen!

Could we also blame the volume house builders? In the UK they account for a large proportion of the market. They could be driving forward these changes, as they seemed to be doing at this exhibition, but all too often change costs money and perhaps any hit on profits put the brakes on such advances.

Finally, I never underestimate the impact of aesthetics. The three buildings featured above are hardly sexy, although living in a pyramid would be pretty cool! British tastes are still very traditional and I wonder whether these innovative designs masked the energy efficient approach that any building could have.