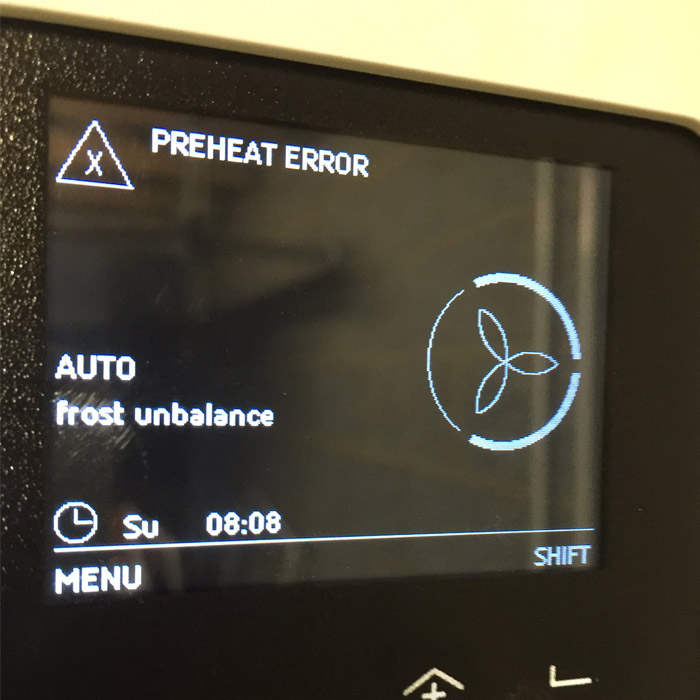 HPH299 : Is mechanical ventilation just something else to go wrong? – with Ben Adam-Smith

Ben Adam-Smith shares his own experience of living with a mechanical ventilation system. While he's clocked up a few error messages on the unit and had more problems than most, he explains why he wouldn't want to go back to natural ventilation.

MVHR is a key component of low energy buildings

In case you're wondering what MVHR is, well, it stands for mechanical ventilation with heat recovery.

But there's a clever twist: by controlling the ventilation you can recover the heat when you want to (transferring it to the fresh incoming air).

Hopefully that's clear, but if not we made a documentary about airtightness a few years ago!

Since this documentary was made I have moved into my own Passivhaus.

I am a big fan of MVHR (pun intended) but that doesn't mean I've had the best relationship with my MVHR unit.

I've had 3 sets of errors on the machine in the two and a half years I've had it.

The first errors might have been in connection with a silencer that was retrofitted a year after we moved in. I suspect the machine was clever enough to notice something had changed. The errors resolved themselves!

About a year later, an external pressure message cropped up a number of times.

The fan status readings on fan speed two which should be 200m3/hour are:

Error messages can be reset

Interestingly, these errors can be reset while you're investigating the cause… but they usually return, even if that is weeks later.

Apparently there was a known issue with the humidity sensors on my particular unit. This was changed and again it was business as usual.

However, at the beginning of the year a new error cropped up!

Nobody likes seeing a flashing red light on their control panel because it means something needs fixing (or at least investigating).

At this particular point we'd been getting night-time temperatures between -2C and -5C, which is the coldest we've experienced since we built the house.

When the temperature warmed up a little I was able to reset the error and everything would return to normal (or until I could get the machine looked at).

However, that trick didn't work the next day.

The machine completely died and I couldn't get it to come back on. There was also a light burning smell inside the house.

I had a couple of concerns at this point:

Fortunately when it comes to mould, I was quickly reassured by my friends in the know.

So, now whilst the problem was investigated we had to survive without the machine.

With no MVHR running, we resorted to opening windows!

Not that I'd choose to do this experiment but it was quite interesting to see the impact of living in a Passivhaus with no MVHR running.

Firstly, the house remained nice and warm inside (the insulation has gone nowhere). Perhaps the heat wasn't as even; I don't know. But it wasn't a terrible experience.

It was however, a right faff to have to open the windows every few hours… not to mention the heat we must have wasted… and the family complaining at having the windows open when it was freezing outside.

Perhaps the most interesting impact of no MVHR was the instant lingering smells. My wife noticed that each room had its own smell! And it was definitely harder to shift cooking smells.

On a chat with Steve Clarke at Green Building Store trying to diagnose the problem, we double-checked that power was getting to the unit.

Embarrassingly I hadn't even checked the trip switches. In fact, we'd managed to cover them up with a shelving unit so that I'd forgotten they were even there!

With the machine humming to life, I had a massive sense of relief. Whatever the issue is it's not quite so urgent when the system is at least on.

The preheater needs to be replaced

It didn't take long to diagnose the problem (the burning smell was the preheater working for the last time) but British wisdom of leaving the EU meant the new preheater took several weeks to get here.

The warranty period on MVHR units is typically 2 years

For an essential item for Passivhaus dwellers, this does seem short.

The clock also starts ticking when you buy it.

Mike Coe, the self-builder behind Portree Passivhaus, bought his unit in advance and subsequent delays have meant it will already be out of warranty.

My own unit was out of warranty, too, but the manufacturers kindly supplied the new part free of charge.

I installed my new preheater!

With Steve Clarke from Green Building Store on the phone, I was expertly talked through what I needed to do.

Buying through a company with good customer service was a great move.

We'll have to wait for more cold weather to check it has done the job.

‘MVHR needs to be as reliable as a fridge'

I was interested to see whether other people had had trouble with their units and so I posted up on social media.

I don't believe many Passivhaus owners have actually had problems, which is a good sign. As Fionn Stevenson says ‘good quality assurance is essential'.

Andy Simmonds, Chief Executive of the AECB, stressed it is such an important piece of kit. The emphasis needs to be on durability, reliability and repairability.

He likened an MVHR unit to a fridge.

Having bought a new fridge when I built the house I have noticed that even fridges have got more complicated.

In the past it's normally the plastic door seal that has failed before anything else, but on the new more complex models water dispensers get jammed on and ice trays freezer up, and don't get me started on the plastic water filters!

I would not go back to ‘natural ventilation'

Despite the inconvenience of investigating different error messages, my MVHR unit has never stopped! Yes, I was a bit slow to check the trip switches, but if there's a next time I won't make the same mistake.

If the machine is still operating, you haven't got a big problem

If your machine is not working at all – i.e no ventilation whatsoever – then I would really be looking for a speedy repair.

As with anything in life that breaks, it normally takes a little while to fix it.

So it would be lovely to have the option of a 24-hour repair service in the years to come.