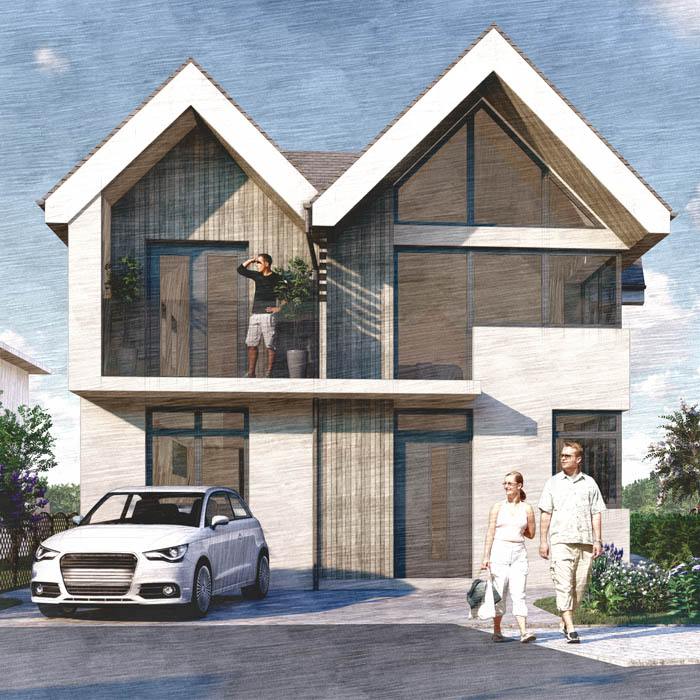 Calum Taylor and Opinder Liddar talk through the design and construction of the ‘Self Build Education House' at Graven Hill.

Calum Taylor is the owner of Build It Magazine, the longest running self build magazine in the UK. Together with their website and exhibitions, their aim is to provide expert advice and information in a practical and down to earth manner, to help self builders make the difficult decisions as easy as possible.

Calum has been working on Build It's Self Build Education House at Graven Hill with Opinder Liddar. Opinder is a director of lapd Architects. They are based in Oxfordshire and specialise in residential projects, particularly for self builders.

It is a showcase of possibilities

Coinciding with Build It magazine's 30th anniversary, Calum's idea for the Self Build Education House was to showcase the possibilities available to self builders by demonstrating the processes and some of the products that can be involved in a self build journey, whether or not they themselves were building at Graven Hill.

It would also be a great experience for Chris Bates, the magazine's editor, to have hands-on involvement with the project management.

The house has been built on the Graven Hill development

Graven Hill is a ground-breaking development: the first of its kind in the UK. The land was formerly owned by the Ministry of Defence before being sold to Cherwell District Council to develop. The site has planning permission for 1800 new homes, up to half of which are designated for self build.

Calum says it has its fair share of cynics however, who question the plot sizes as being more like developer plots.

“But I think it’s incredibly important that for self-build to really become the norm in the UK as opposed to what is done by a relatively few, relatively wealthy people, that we need to look at different models and we need to look at how you can have fantastic housing on smaller plots of land. And if you can do that with the profit on the land going back into the local community via the council then that strikes me as being a perfect model.”

The plot passport outlines the parameters

A number of plots had been allocated for show home use and, following a tender process, Calum successfully won a corner plot around the back of the houses featured on Grand Designs: The Street.

Each plot comes with its own “plot passport” which defines certain parameters, such as maximum height and the footprint of where the house needs to be. With those established, the design can begin to develop as a response to the site aspects.

It needs to work as a showcase, and a home

In five years' time the function will change from show house to a home that will be lived in, and this consideration formed part of the brief. It needs to have enough space for people to walk around in, while still feeling like a home.

“Primarily we want people to look at it as ‘I want to live here. This is an amazing house.’ We don’t want them to think, ‘this works very well as a museum.'”

With a plot restriction of 160m², the design was put in for planning at a size of 150m². The Graven Hill calculations don't include basements and void spaces, so together with a basement plus an attic that would be prime for conversion, the overall area is closer to 230m².

The budget has been for high-end specification

Calum explains that the budget is rather difficult to define, as it's not being constructed in the usual way. Typically a similar house might cost £2,000 per square metre, or around £470,000 in total. But as Build It's complete guide to the house highlights, you could build the same size of house for substantially less if it wasn't to the same high level of specification.

By adding in the expensive finishes and details, Calum explains that it is giving people the opportunity to look at where they want to be spending their chunks of money.

Opinder also likes the aesthetic of a steep roof pitch on a house, and to make a dramatic feature of the front he designed two gables, with the feature continuing around to the side.

Insulated Concrete Form (ICF) was chosen as the construction method for a variety of reasons: it has good energy efficiency, is very airtight, performs well acoustically, and was particularly well suited for constructing the basement.

Following discussions with Nudura, their ICF supplier, Opinder decided to push the design and show the materials at their best. The resulting design has a balcony that projects over the car parking area, hanging off a cantilevered wall that flies out at the first floor level. There are also frameless windows that turn the corner and are taken up to the underside of the gables.

The ‘wow factor' was an important consideration

Often the space required for a plant room is underestimated, so the Build It house is a good example of showing how much area can be needed. Their plant room is in the basement to house the mechanical ventilation with heat recovery (MVHR) system, along with the inverter for the solar panels, battery storage, water softener, control hub for the Niko smart home system, and the amplifiers for the whole house sound system.

Calum wants visitors to have the ‘wow factor' when they walk in, so Opinder has designed a triple-height entrance hall. There you are greeted by a sculptural ash staircase that winds its way up. The eye is also drawn through towards the back of the building and the garden.

A mixture of door types have been used, with pocket doors that slide into the walls, and a glass screen that gives the flexibility of sub-dividing the open space if needed.

There is further architectural interest on the ground floor, with a curved wall that comes around from the cloakroom and into the kitchen, next to the floor to ceiling windows that give an amazingly light and spacious feel.

The ground floor is open plan with lots of hard surfaces, but the oblique angles stop it from being acoustically noisy.

The timber posi-joists, which are great for running services through, can be prone to noise transfer, so they have used acoustic boards, acoustic insulation and a screeded floor on top.

On the first floor there is a glass balustrade which further enhances the connection with the outdoor space.

Each bedroom is individual because of the different aspects and how they sit within the roof forms.

It has been a typical self build journey in many ways

The project hasn't been without its challenges along the way.

Calum explains that many of the difficulties have been in the project management of coordinating suppliers and contractors to work together.

Issues were with communication, building to the same tolerances, and even incorrect measurements on site meaning that windows and doors didn't end up exactly where they should have been.

His tip for self builders is to keep on top of checking things like that because you could be storing up problems for a later date if things aren't nipped in the bud as soon as possible.

“The problems are about people and communication and scheduling things and dealing with the weather and all of those little curve balls that come your way and how you can actually try and continually pull it back to keeping it true to the vision of what you’re trying to create and as originally in the plans. Because it can be quite easy to deviate off slightly and end up with a house that doesn’t quite look and doesn’t quite perform in the way that you hoped it would.”

The house shows what can be achieved on a tight plot

With Calum working on the house from a Project Director level, it has been Editor Chris Bates who has been project managing the self build, going through the hard learning process and gaining valuable lessons and insights from it.

Regular readers of Build It have been following the journey in the magazine and have been visiting to see the finished building. And for other members of the public with no prior experience of it, there are infographics around the house that help them understand the journey and the choices that were made around materials and suppliers.

Going forward, the house will be paramount to the magazine's editorial, as they can relate back to the experiences and decisions they made, or what they might have done differently in another scenario.

Although the house went over budget and needed their contingency fund, (primarily due to weather delays), Opinder is keen for the house to show what is achievable on a fairly tight plot. He says it shows that it can be attainable for everybody and offers a genuine alternative to buying a typical “Noddy-box” house.

We've been following the Graven Hill scheme with interest for some time, so if you would like to know more about the background of the project and what it's like to build there, then check out some of our previous podcasts:

Find out more about lapd Architects