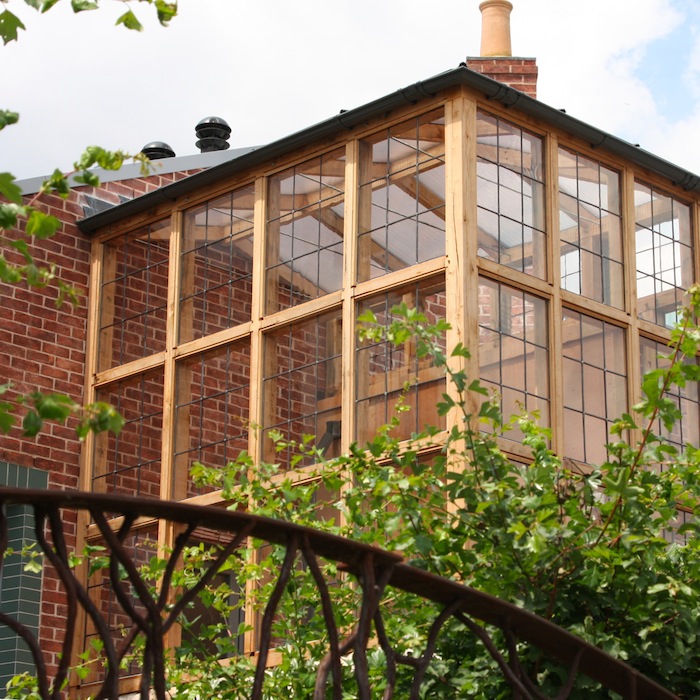 HPH203 : Putting craftsmanship at the centre of your eco build – with Will Anderson

Author and self-builder Will Anderson talks about realising his self-build dream not once but twice! 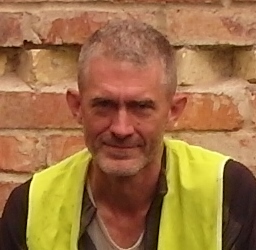 Interview with Will Anderson

Will describes himself as “a writer, actor, builder and craftsman”. His account of his first self-build was published in The Independent newspaper and is now available to buy as a book. His previous work has included writing and contributing to other publications with an environmental angle.

A tree inspired a house with high environmental standards

Around the year 2000, Will Anderson and his partner snapped up a rare South London plot. The very big tree it housed inspired the name and design of Tree House: a house that would work like a tree. Wanting to do their very best for that plot meant building a house that was not only wonderful to live in, but had the very best ecological performance.

Will says any extra costs were justified by long term savings, adding, “If you built a house that had the very best environmental performance, it would also, hopefully, be the very best for you.” 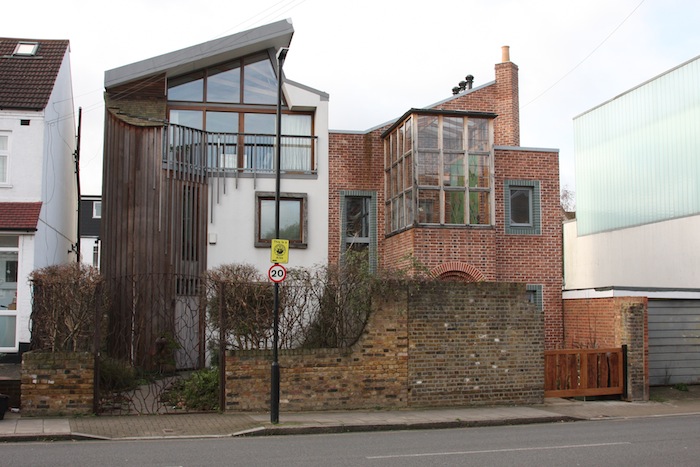 Will was interested in the Passivhaus standard and had even contacted Wolfgang Feist, but in 2004 it wasn’t an established approach in the UK. So Will worked with his architect, Peter Smithdale of Constructive Individuals, to deliver a house that was self-sufficient in energy and “zero carbon”. To manage this meant combining a fabric first approach with “quite a lot of technology”.

The high-performance house included a PV cell array, and a hot water panel. Furthermore, a ground source heat pump was installed in boreholes in the small plot. Will says this tried and tested technology continues to work very well, explaining, “They’re quite simple bits of technology compared to boilers.” 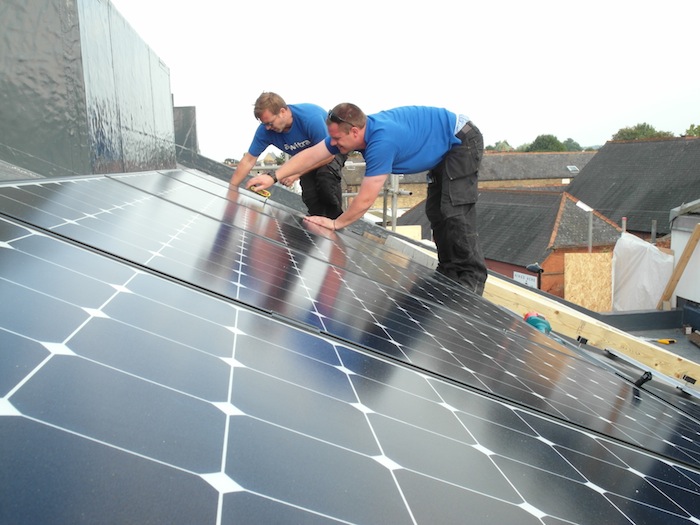 Will built with the plot next door in mind

Tree House was detached, but they knew that eventually it would become semi-detached, as there was a plot next door. Thinking ahead, Will avoided putting windows on the northern elevation that would become a party wall.

The people who owned the garden in question appreciated the consideration and gave him first option when they decided to sell the land. He took the chance to build his second house, The Orchard. 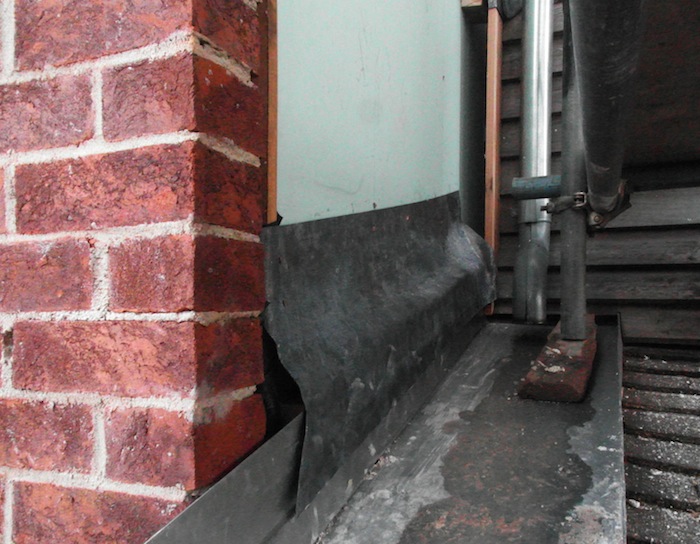 Where the two houses meet

Will had to overcome issues of planning and party walls

Building onto a detached property presented some challenges. For example, the render board had to be removed from Tree House and another timber frame wall built and filled with insulation. Furthermore the two walls couldn’t be attached (apart from some metal ties at the very top) to ensure acoustic isolation.

Getting the right design and gaining planning permission took a long time too, but one of the biggest problems was the party wall agreement. Will advises getting a really good party wall surveyor and paying attention to the detail of the party wall award, adding, “You need to just make sure you’re properly protected.” 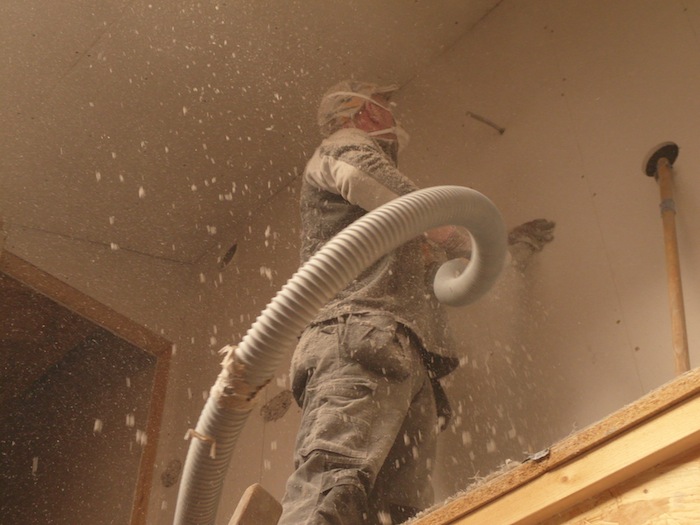 The Orchard has an improved fabric but less technology

Will wanted The Orchard to use less technology but still be very comfortable. This meant improving the fabric of the house in order to cut out the heating system. Contractors and materials were more familiar with Passivhaus principles by then and The Orchard benefitted from a purpose built external airtight layer.

The Orchard is ventilated non-mechanically, a deliberate decision on Will’s part. He is very pleased with their Ventive passive heat recovery ventilation system, commenting, “We’ve got a completely draft free, stable interior temperature, but we still have good air quality without having all the business of mechanical ventilation.” 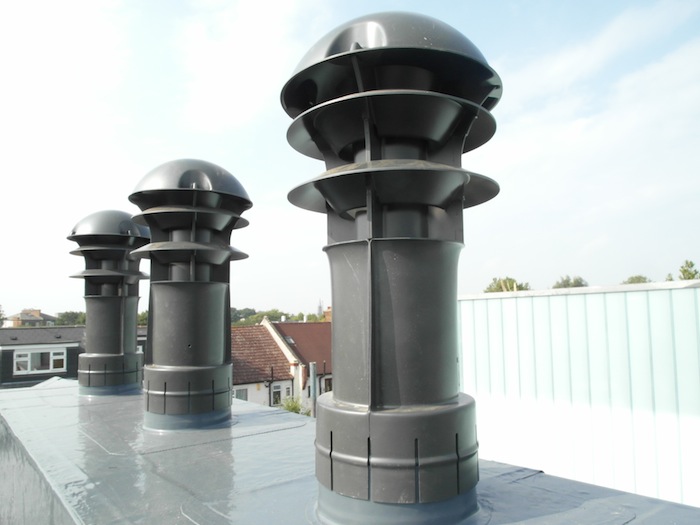 Will wanted to get more hands-on second time around

Helping finish the building of Tree House gave Will enough confidence to get more involved the second time around, although he says, “You need to know your limits, obviously”. So, even though he had done a bricklaying course, he called on an experienced bricklayer when he lost confidence on the garden wall after the tenth course of bricks. 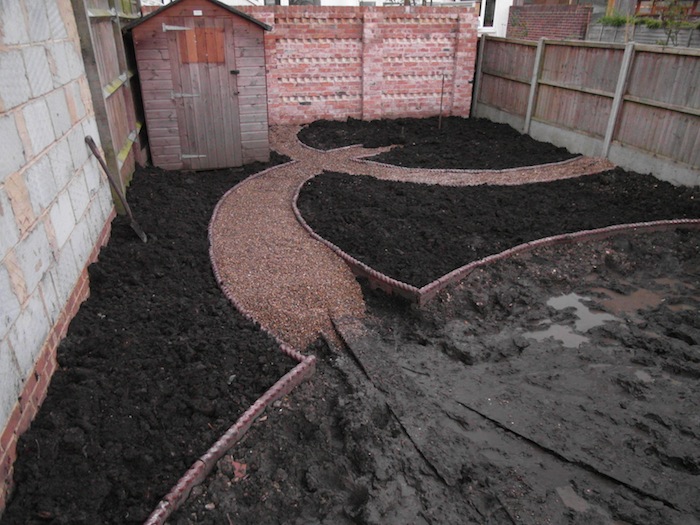 Some subcontractors will have their own helpers and will want to do all their work on their own terms. But Will says there are others who won’t mind you joining in. For example, given Will had some experience, the frame company, Touchwood Homes were very happy for him to lend a hand. 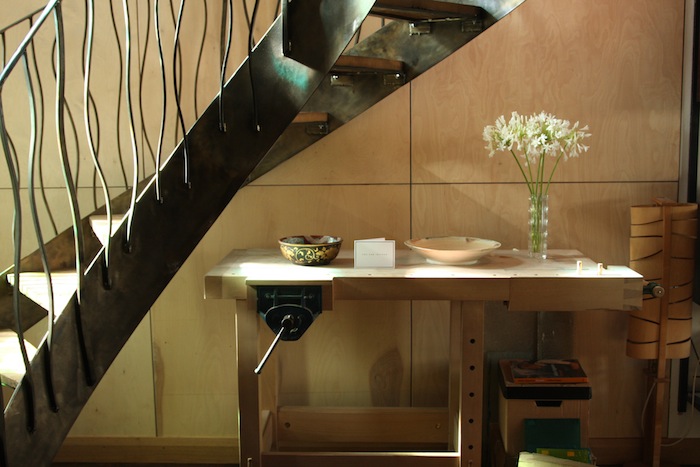 The Arts and Crafts Movement inspired Will’s labour of love

As part of the house building process, Will made his own workbench. That it has remained part of the main room says much about Will’s love of handmade items. The Orchard is inspired by the Arts and Crafts Movement and its architects, many of whose houses he has visited. What he likes so much is “the handcrafted approach, the delight in materials and in a kind of clean but very rich design.” 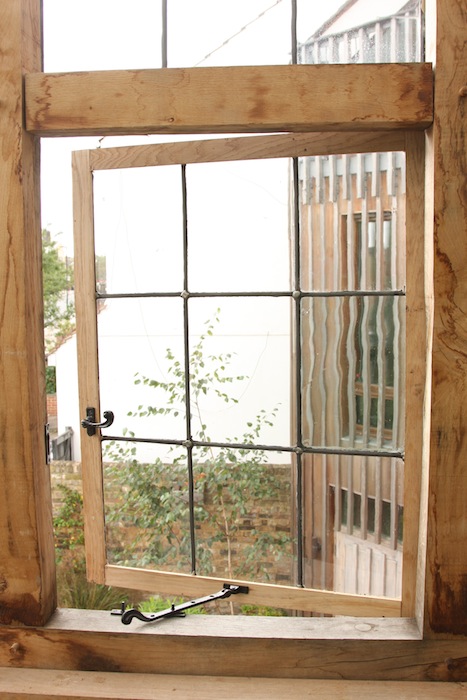 Although he started without any craft skills, Will learnt a lot of trades to build The Orchard, including ceramics, even making tiles from their excavated foundations clay. To find the right course Will recommends trying out what’s local. He found one reasonably nearby in Croydon, where he learnt joinery, bricklaying and plastering. He went further afield for the more specialist skills: cabinet making in Kent and stained glass making at the Working Men’s College in North London. 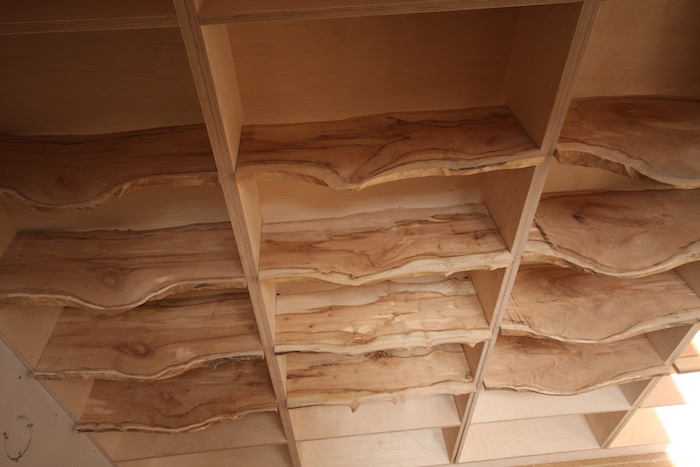 Learning skills had to be balanced with designing and building

At the design stage, Will was already thinking about how to incorporate these crafts aspects, meaning careful planning was needed. He admits it was tricky to move between design, doing courses and starting on site and keep it all going at the same time. 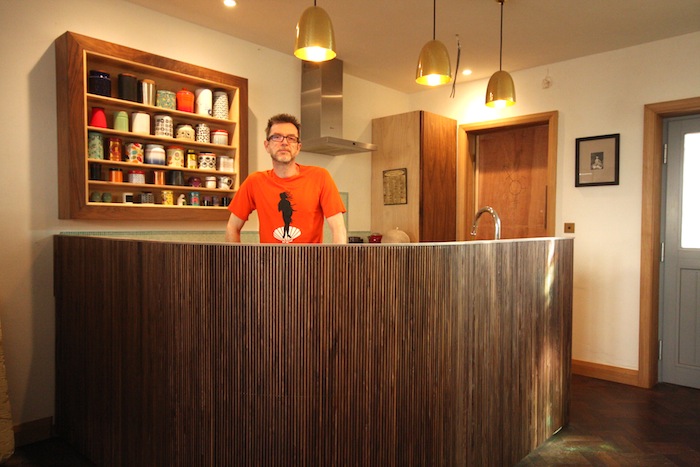 For example, the open-plan kitchen in the main living space had to be part of the overall design to make sure it would fit in: it was built long before the house! Likewise the two-storey, triple-glazed, staircase window, finished with stained glass, was always part of the design. 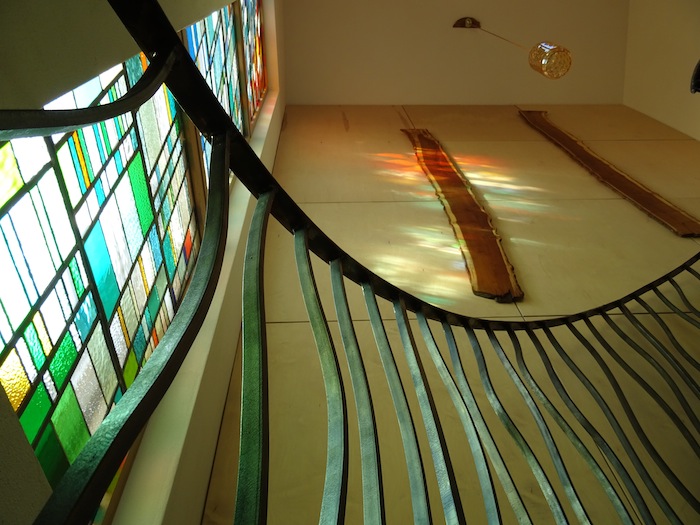 Self-builders need support and patience, and to understand the industry

Will says that self-building with no experience isn’t so hard if you get the right people to do the right jobs and you have enough patience. Understanding how the building industry works is important too. For example, Will advises being flexible rather than getting frustrated if builders don’t start when they said they would. “In the building industry, that’s absolutely standard. Not because builders are unreliable, but because people’s timetables and schedules are always shifting,” he explains. 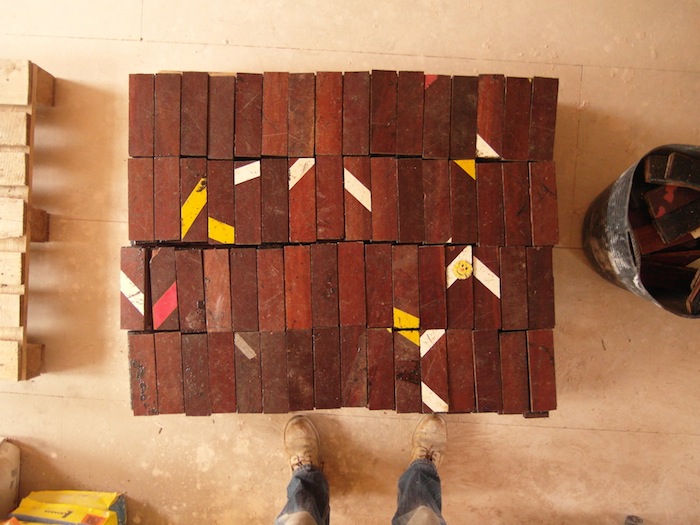 Will has used reclaimed materials in both houses. For example the parquet flooring uses African, Australian and Asian woods that would be impossible to source sustainably today. Modern glues can “recharge the bitumen”, so it didn’t need to be removed. This made the process easier but it was still labour intensive, especially as each room used a different wood and a different pattern. 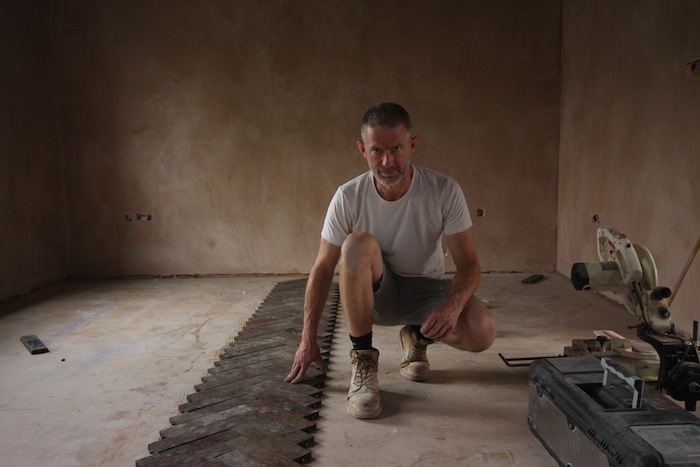 The blocks of wood had to be cleaned then set out properly. Will’s method was to build out from a long spine of blocks down the middle of the room. Care was needed to avoid the pattern going wonky and having to cut blocks to fit them in. Next everything was sanded down to a new surface and then oiled. Will reflects, “A massive, massive amount of work that was. But I absolutely love it.”

Careful planning has paid off

As the name suggests, Will wanted to build an urban orchard. He knew he wouldn’t get big machinery to the back of the house after it was built, so before he started building he replaced a lot of the poor soil with “really good quality muck”. Now the front and back gardens are densely planted with fruit trees and outside the thermal envelope are a larder and a conservatory where Will grows more tender fruit.

As so much of the house is hand made it has been a long project, but all the work and planning was worthwhile. Will says, “We’ve taken a long time over it. But we’re going to be here forever, so that’s okay.” 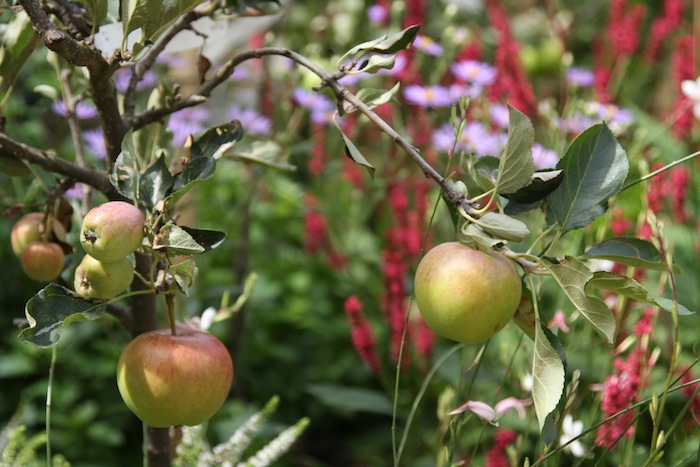 Download a transcript of the interview with Will Anderson