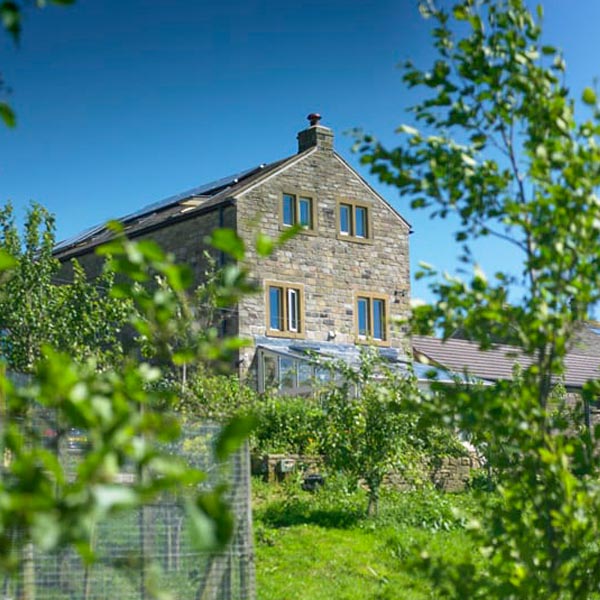 Having been Passivhaus pioneers in the UK with their Denby Dale project, the building team at Green Building Company has kept honing their approach.

There was Golcar new build project and Stirley Community Farm retrofit. Now we look at two of their radical retrofit projects, Cumberworth and Lower Royd, and how they embrace the same philosophy but still require bespoke solutions.

Initially this was part barn conversion and part 1990s extension, so there needed to be two different strategies for this project.

The existing property was hard to heat

The owners were spending £3,500 a year on LPG trying to keep this 150m2 property warm but they were still cold!

In order to make the house more comfortable and reduce heating bills they embarked on a deep retrofit. This embraced the Passivhaus methodology of making the house draught free, increasing the levels of insulation, reducing thermal bridging and introducing mechanical ventilation with heat recovery.

The designs were modelled in the Passive House Planning Package (PHPP).

While a lot of retrofits use external wall insulation, there are a few reasons why they didn't. Cumberworth is at the top of the Pennines and it is exposed to a lot of moisture. The natural stone works well in these parts.

Bill continues: “To build in any other way is totally out of character for this region. And that’s what the customer wants.”

The three moisture risks had to be addressed

The moisture risk depends on the wall build-up. The ex-barn wall had two stone leaves which were filled with rubble! Being a Victorian barn it was also susceptible to rising damp because there was no damp proof course.

In this high exposure region on the Pennines rain driven damp through the porous stone was another risk.

The third moisture risk is interstitial condensation which is the condensation of internal moist air reaching the dew point where it turns to water as it meets a cold wall.

This section of the building was insulated was a product called TecTem, which is vapour open and breathes like the original building would have done.

WUFI was used to model the moisture risks

A German software package called WUFI was used to look at the moisture risks. To increase accuracy it requires a lot of information first.

Bills gives a few examples: “It takes into account where you are, the orientation of the wall – obviously a West wall up here is in more danger than the East wall because most of our rain comes from the West – the rising damp, the type of stone it is, which quarry it’s from, the mortar joints and so forth, and then obviously the insulation.”

Moisture sensors in the walls help monitor the situation and allow Bill to assess the accuracy of the program. “I might say that all of the buildings are performing fine.”

Insulating the extension was simpler

As the 1990s part of the Cumberworth project is a cavity wall construction it should be less susceptible to rain-driven damp. And it's got a damp proof course which should deal with rising damp.

A ground source heat pump is the heat source

For a new build Passivhaus the energy demand would be so low that underfloor heating would not be appropriate. In a retrofit situation it becomes more relevant.

Also the clients had a field in front of the house which they were keen to use for a ground source heat pump.

Bill explains: “Air source and ground source heat pumps work most efficiently at delivering 35C water, hot water if you like, for your central heating system. And that suits underfloor heating more than radiators. That then informs how you do the floor. Because we don’t want to be heating up masses of concrete in a floor because of the slow cooling and heating – it doesn’t respond. “

So it's only 75mm of heating screed on top of the insulation.

The insulation follows the line of the roof

As with most of Green Building Company's retrofit projects they have gone for a cathedral roof. This means the insulation is within the structural timber roof and that the loft space is inside the thermal envelope.

MVHR duct runs were down corridors

As this is a low energy retrofit a mechanical ventilation with heat recovery was specified. It goes without saying that these are fairly intrusive, requiring a plant room for the unit and ducting around the house.

While a new build Passivhaus might use posijoists in the intermediate floor, in a retrofit situation you have to come up with other solutions.

Bill explains that they ran the ducting down the corridor because this was an area where a lower ceiling is not so noticeable.

Vaccuum insulated panels were used around some window reveals

Green Building Store had already supplied outward-opening triple glazed windows to this property five years previously and hence they were keen to keep these!

One challenge they faced was in maintaining the continuity of insulation.

Bill explains: “If you do it [insulation] well in ninety percent of your building, for example, the ten percent becomes very vulnerable to condensation and cold bridging. So, the reveals between the very good wall insulation we were doing, in to the window frame, only allowed for a ten millimetre insulation.”

To maintain that u-value at this thickness they needed to use vacuum insulated panels, custom made to fit!

Much like Cumberworth, this project had two different parts. One was a virgin barn and the other was an existing farmhouse that hadn't been touched since the 1960s. So it was ripe for a retrofit.

A connection to mains gas helped inform the project

Despite it's fairly remote location Lower Royd had a mains gas connection.

The clients had envisaged using a ground source heat pump to heat the house, but in terms of economics, their money could be better spent on insulation!

Bill comments: “A ground source heat pump may cost you twenty-grand to get into the building as opposed to gas and the standard boiler – and we’re talking about the smallest condensing boiler, off the shelf from your local builder’s merchant – costing, installed, fifteen-hundred, two-grand. You’re better off with that saving of fifteen-grand, say, to be put into your fabric. The cheapest energy is the energy you save.“

And of course this doesn't rule out changing the heating system to an air source or ground source heat pump further down the line.

A spray-on lime based insulation saved flattening the walls

On the Cumberworth project they used a rigid insulation called TecTem. However, they had to invest a lot of time in flattening the walls to be able to apply it properly. So they were keen to consider other alternatives at Lower Royd.

So they trialled a spray-on internal wall insulation from Italy called Diathonite Evolution.

Not only is it airtight, but it is vapour and capillary open to address any moisture issues.

And being a lime product, it naturally inhibits mould growth.

Airtightness is the most important factor for comfort

Having carried out a few deep retrofits, Bill believes that when it comes to energy and comfort, airtightness is the most important factor. Then insulation comes next.

In fact they may experiment with reducing the insulation levels a little on future projects and look at the impact.