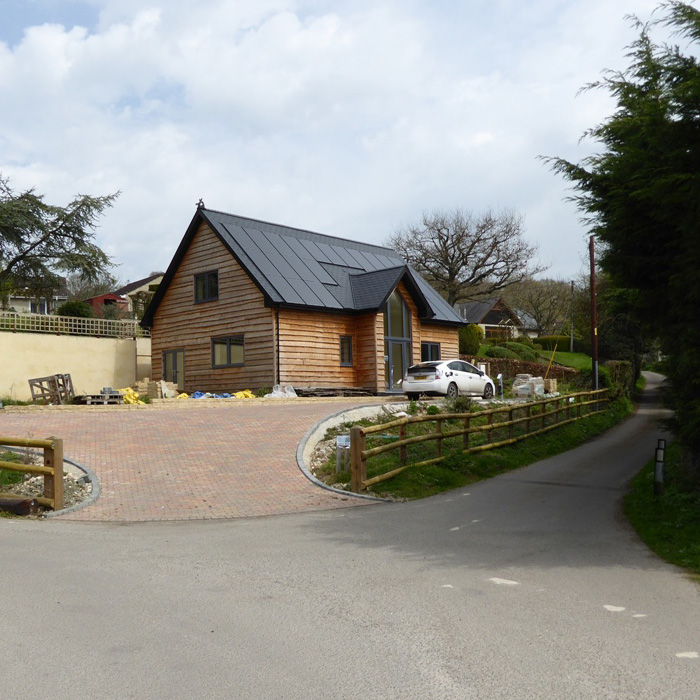 HPH155 : Do you really need an architect to design your house? – with Jeremy Harris

Jeremy Harris continues his story, sharing his experience of being a hands-on self-builder. 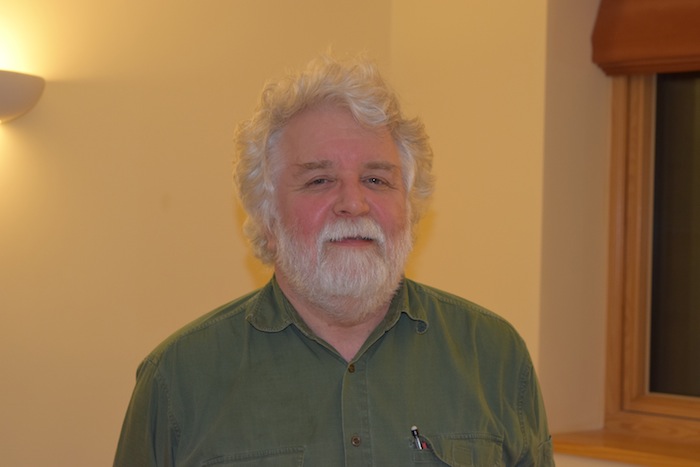 Although Jeremy had never laid a brick or employed builders before, he did have useful DIY experience and had used CAD software at work. Jeremy explains what gave him the confidence to tackle so much of his project himself, adding, “If you require degrees and whatever then the building industry wouldn’t be populated by the sort of people it is.”

Jeremy chose a timber frame as he would be building in the autumn and wanted to get the house weather-tight quickly.

It’s important to get the groundworks right

Jeremy employed a groundworks contractor to make sure the levels were right and the drainage systems were all put in correctly. This cost about £55,000 and took seven weeks to complete.

They had to remove about 900 tonnes of soil to get the site level, digging it out of the hillside and building a three metre high retaining wall almost a metre thick at the base to hold the ground back. 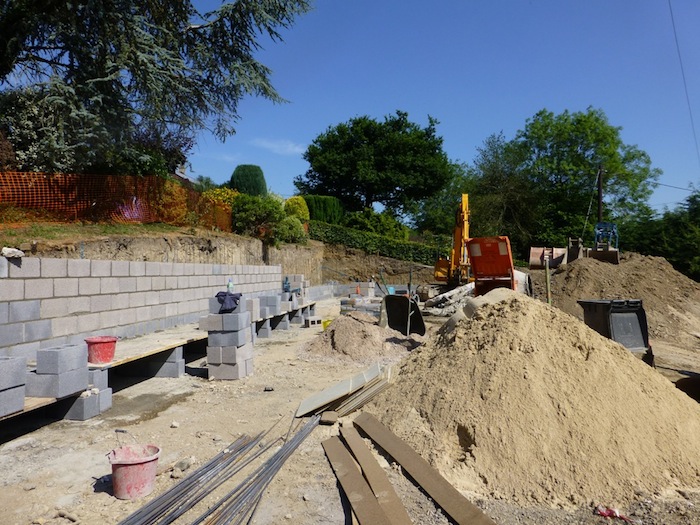 Although initially lacking the confidence to manage the whole project, once Jeremy had gone through the planning process, designed the house without an architect and become familiar with building regulations, he concluded he could project manage the build as well.

The contract with the timber frame company for the house and garage clarified what they were responsible for, avoiding any arguments down the line. The price was about £65,000. 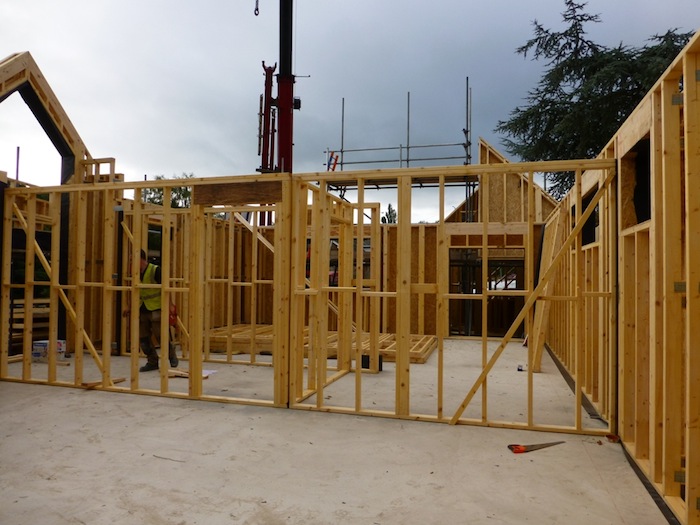 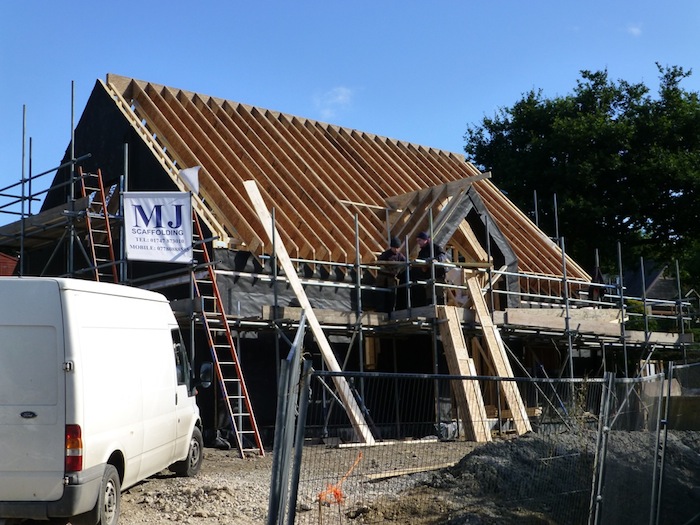 Purchasing and timing are essential for success

The timber frame contractor needed the window supplier to install the windows before the building could be air tested, so Jeremy had to coordinate this.

Jeremy then instructed a roofing company to use an approach commonly found in France, setting 25 solar panels straight onto the south side of the roof, so they were almost flush with the surrounding tiles. Although the tiles look like dark slate, they are made from recycled car tires and bin bags, are recyclable and met the conservation officer’s approval. 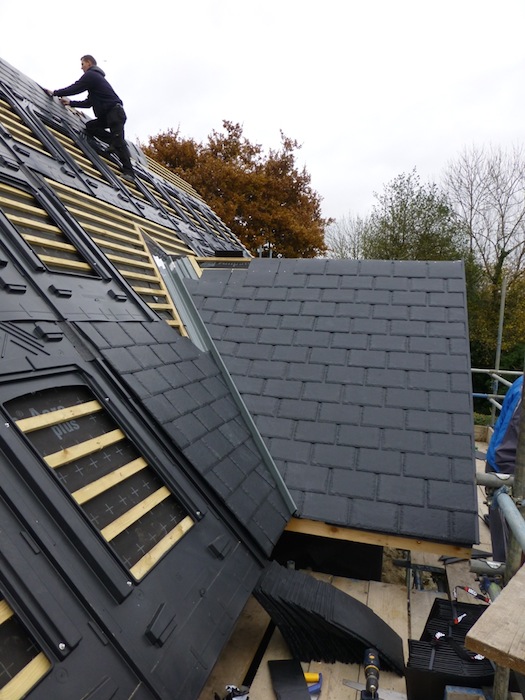 Working alone can slow the project down

Jeremy worked alone installing the plumbing and heating system, laying flooring, fitting curtains and cupboards and decorating. He admits this slowed the project down and recalls running from one end of the house to the other twenty times an hour to put in ventilation ducting on his own. With two people, it would have taken half an hour rather than three hours.

He did get some help where he had to, working alongside an electrician as Jeremy wasn’t Part P certified. And a joiner hung the doors because they’re very heavy. 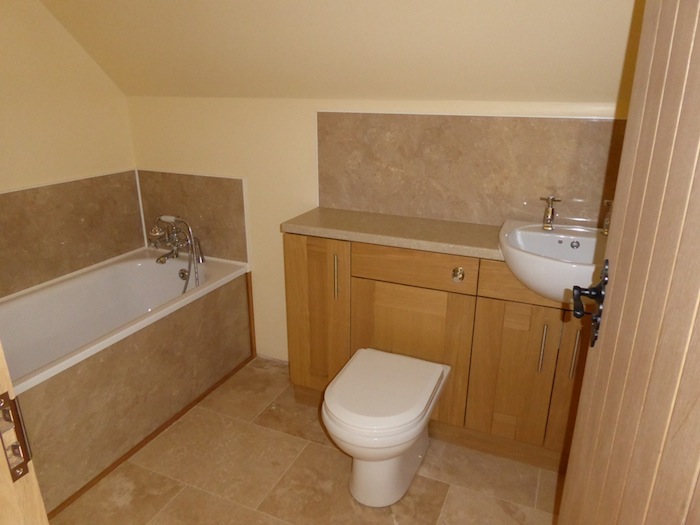 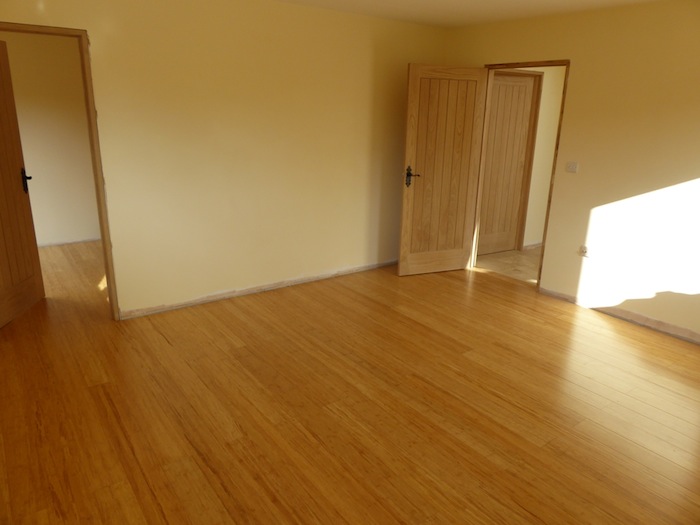 Jeremy wasn’t afraid to do things differently and took advantage of emerging products. 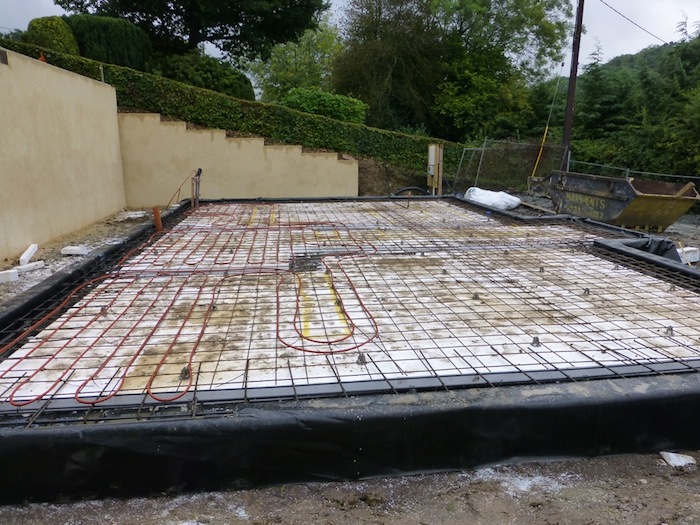 A self-build can be stressful

Build issues, notably the borehole, led to severe stress. Jeremy says: “You realise that practically every self-builder comes to that stage in the build where it all just gets too much.” Online self-build forums gave him support, as well as ideas and information.

There will be problems and lessons learned

Things didn’t always go to plan with the project:

Jeremy says, “the most important thing you can do is research, research, and more research”. Here are 10 tips to take away from his story:

Jeremy Harris, a scientist by background, wanted a low energy house for his retirement. He talks about the initial stages of his self-build project: finding a plot of land and obtaining planning approval.

Jeremy Harris, a scientist by background, wanted a low energy house for his retirement. He first came up with the idea that he might like to build a house around ten years ago.

Jeremy found television programmes and magazines rarely touch on finding a plot, designing a house to fit that plot, and the people you have to employ to do all of that work. It can be very expensive, costing thousands of pounds for planning consultants, architects, building control, etc.

Finding a plot of land was extremely hard. The Harrises drove several thousand miles, visiting disappointing plots. They began by looking at what they wanted to build, but Jeremy concluded this was the wrong way round: first find a plot, then determine what type of house will fit on it.

Having walked away from one likely prospect, by chance they found their plot of land 16 miles from where they were living. It was too overgrown to see properly and fenced so they couldn’t get into it, but looked like it might be exactly what they wanted: facing south (i.e. good solar access) and in a sheltered valley. 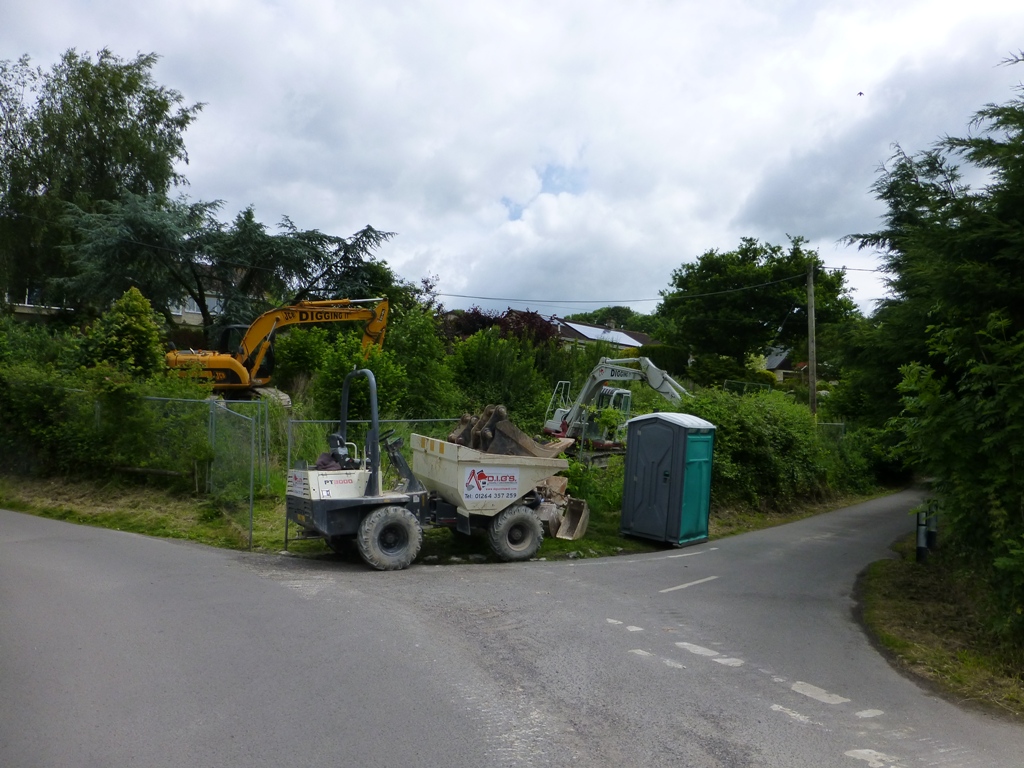 There's a plot in there somewhere!

When buying a plot of land a solicitor can tell you if there’s a public footpath on it but won’t find out if you’ve got water, mains electricity, mains sewage or even if the boundaries are in the right place.

Services in rural areas are often stretched to the limit. Jeremy had to ask the relevant utility companies if they could supply:

As services would cost so much, Jeremy renegotiated the price accepted. The land hadn’t sold for eight years so he persuaded the vendor to knock off a substantial amount.

Plots of land don’t have registered boundaries as a rule. There was a boundary error affecting the Harrises’ plot meaning the house approved to go on it wouldn’t fit.

The process for resolving boundary errors is complex and time consuming. It’s up to the vendor to do it, so you have to persuade them to spend money with Land Registry to get title plans amended. This often affects adjacent houses, as well as your plot, involving lenders as they have a right on the title.

A stumbling block can sometimes turn out to be an opportunity

It took them a year to get their boundary error resolved, but this allowed time to plan the project properly.

Jeremy wrote a brief with eight key design points but the architects he approached didn’t seem to understand the role of design with low energy houses. Looking further afield for a Passivhaus specialist was an option, but thinking the distance might make communication difficult Jeremy decided he’d design their house himself.

So the year was productively spent:

This avoided inflaming an existing situation with the neighbours, as the plot had a chequered planning history, and saved money too! 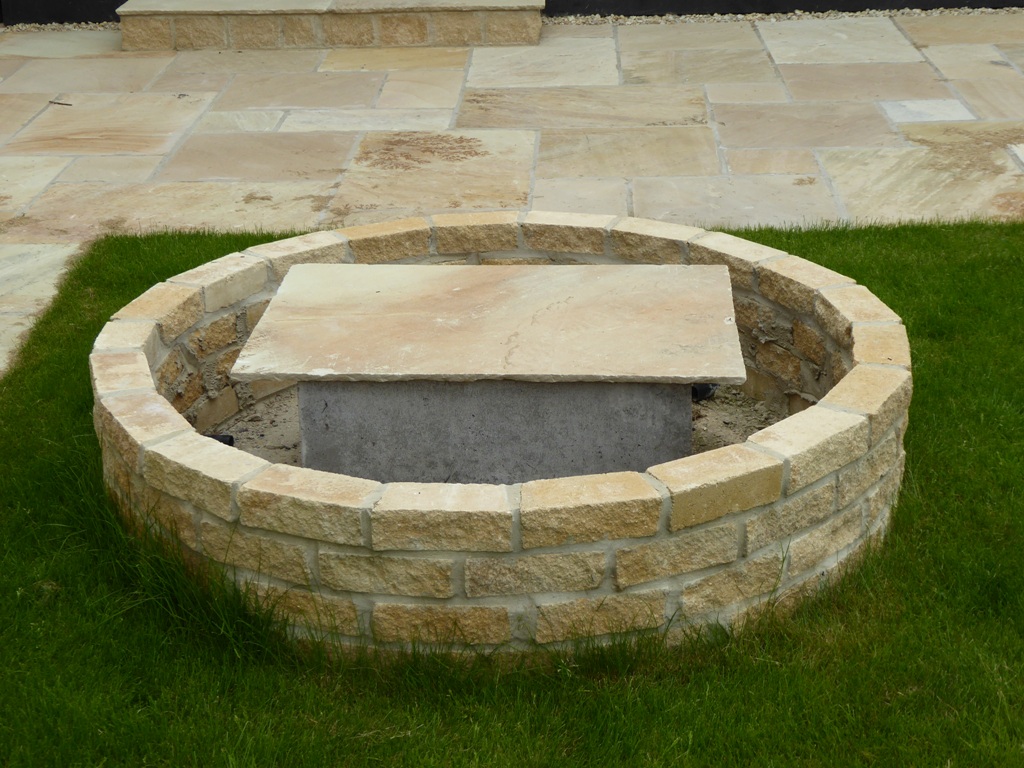 Once the principle of development is established by an approval, it’s extremely difficult for planners to remove it

The Harrises’ plot had planning permission for a little stone bungalow that they didn’t want. As the local authority had approved the principle of putting a house on the plot, their plan was to submit a new application.

Areas of outstanding natural beauty, conservation areas and proximity to listed buildings put constraints on what you can build. For example, needing to have all the external materials approved, as was the case with Jeremy’s house.

In Jeremy’s area, seven objection letters result in the application being referred to a planning committee, where emotions come into play far more than planning law.

A previous application for the plot resulted in 14 objections at Parish Council level and dozens of letters. To mitigate objections for their application, Jeremy spoke to every neighbour, sent them regular update newsletters and even Christmas cards.

He also made scale models, enabling all interested parties to understand the design before the planning application went in. His wife could look inside the rooms to see whether they were big enough, and the neighbours could see what the house might look like in the landscape. And the scale model played an important part at the Parish Council planning meeting, where applicants aren’t allowed to talk. 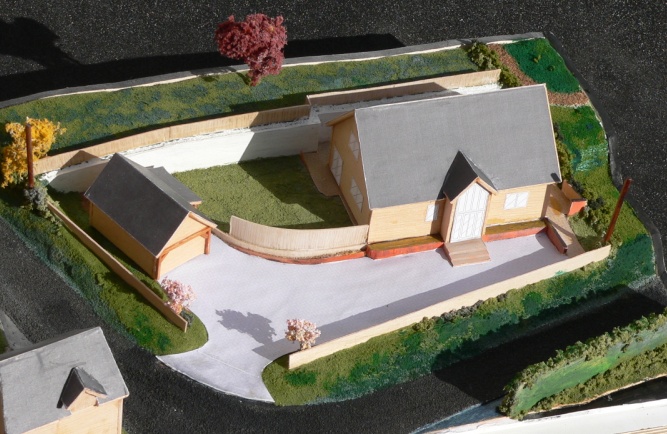 “We had several cases where objectors turned to supporters”

Jeremy eliminated concerns by talking them through with neighbours:

Engaging with local people is important but Jeremy adds a caveat: be cautious and put your foot down if neighbours ask for too much; at the end of the day it’s your plot and your house.

The Harrises got through the planning stage with no letters of objection at all, so the decision was down to a Planning Officer purely based on the law and planning policies for the area, and approval was granted.