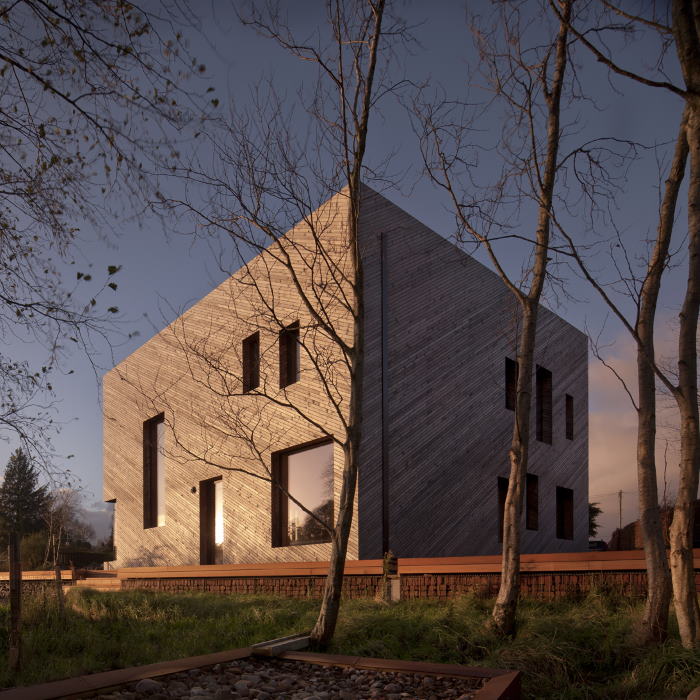 HPH302 : A contemporary Passivhaus home in a rural context – with Martin McCrae and Mhairi Grant

Mhairi Grant and Martin McCrae share their self build journey. Their contemporary home seems to have it all, from striking design and great ecological credentials to high quality finish and value for money… but Martin and Mhairi had to work hard for it!

Mhairi and Martin met back in 1997 when they both studied at the Mackintosh School of Architecture. Together they co-founded Paper Igloo, the architectural practice that they run from their home in Kippen, Scotland.

They increased their land budget to find a suitable plot

As speclialists in low energy design, and having lived in a beautiful but thermally uncomfortable flat in Glasgow, they made the decision to look for land and build a Passivhaus.

After a couple of years of searching they realised that the £100,000 budget they had originally set aside for land wasn't going to get them the plot they wanted: they were either too small, too remote, or not a suitable orientation for a Passivhaus. By upping their budget to £135,000 they were able to find their picturesque, slightly sloping, semi-rural plot that afforded them views onto open fields.

The plot already had planning consent for a traditional house, but they submitted new plans for their contemporary cube which were approved following a little bit of resistance.

Mhairi admits that they probably weren't aware quite how much sweat equity would be involved, but she considers the learning from it to be all part of the journey and not something they regret!

“Building a Passivhaus isn't as daunting as some people make it out to be. I think it's just a matter of doing things correctly in the correct order and rigorously looking at the detailing.”

Initially, Martin took 12 weeks off from their business in order to get the build underway, working with two joiners to erect the timber frame. As it's just the two of them in their practice, this did mean a drop in income for a time, and one of the reasons the project took so long was because they had to balance their finances by earning money as they went in order to finance the build.

What they originally thought might take two or three years, actually took six! And this was at the expense of their social life over that period as much of their free time was spent working on the house.

They had strategies for managing the challenge

At the halfway point they were thinking it was starting to drag, so keeping their energy up was challenging. Taking the cladding as an example of one particularly wearing period, they did it themselves over the space of four years, with each elevation taking an entire summer to complete.

Mhairi says it was important to keep reminding themselves of what it was they were trying to achieve, and that it would be worth it in the end. In the same way they would approach any dauntingly large task, they broke it down into smaller tasks, tackling each one before moving on to the next.

Martin adds that it is a technique they use for coping with stress at work too, and it helped get them through the long build process. He also says that being in it together made a difference.

Their plan was to create a simple and clean design that would allow them to easily meet the Passivhaus standard, but also sustainability gold and technical standards in Scotland. That incorporated a further set of criteria to do with water-saving and acoustic performance.

They knew that they wanted to use a timber frame, but struggled to find a supplier who could provide a Passivhaus-ready or kit solution. That was why they ended up stick building the frame, and why Martin says that decisions like that can lead you to design decisions.

The pace of building slowed once the frame had been completed

They employed someone to do the groundworks but installed the Isoquick EPS raft foundations themselves, with the help of friends over a weekend.

After the concrete was poured they were able to start on the stick frame.

Once the joiners had finished the frame, Mhairi and Martin took over the workload. They spent the next four months taking as many days off work as they could, plus evenings and weekends, working on the wall installation, hand-cutting, and fitting the wood fibre batts.

They tried to be resourceful, not wasteful

Martin and Mhairi were careful to minimise the amount of waste that left the site. They were able to relocate the excavated earth to other areas of the garden, and in doing so were able to create a flatter garden with drop-down terrace towards the barn.

They were also very diligent about buying materials with as little packaging as possible. Plastic was recycled where possible, pallets were broken up into firewood for Mhairi's dad, and off-cuts of wood fibre insulation were stacked rather than having to use new pieces. They were rigorous too about how to cut and use the plasterboard in order to minimise waste, and were left with only four A3 sized off-cuts from the whole build. With such little waste, they were able to just take it to the tip, rather than needing a skip. This also had cost savings, though they do agree that it did mean it all took a bit longer.

Living in a caravan was incentive to keep the project moving!

Having sold their flat, they rented a couple of different places in the village before finally moving into a caravan for the final nine months. Living in a two-berth van, with the water freezing over the winter and an electric bar heater on permanently to try and stay warm and dry, in what was also their office, did focus their minds to crack on and get moved in as soon as possible! They managed to get one room ready first where they could sleep and work while they finished the rest of the house. At the point when they moved in, they had their electrical completion and were plaster boarded in most of the house, but were using a sheet of OSB as a kitchen worktop. They didn't have their linoleum or timber flooring down upstairs either and were just at the acoustic flooring stage.

Rainwater has a visual journey through the garden

Part of the sustainability gold section in the technical standards in Scotland is about water-saving measures. To meet this criteria, they have used low-flow fixtures and fittings on all their taps and showers. They attenuate about 40% of the rainwater from their sedum roof, and only have one rainwater pipe for the whole of the flat roof area.

That takes the water on a journey down off the building and into a catch-pit of stones, along a trough and into a rain garden – an elevated planter in the garden with plants that are suited to being saturated or very dry. The overflow from that goes to the barn at the bottom of the garden.

Renewables have been incorporated

The 1.5kW array of PVs on the roof is enough to run the dishwasher and washing machine, and pays for itself. A solar thermal array makes a massive contribution to their hot water needs, and almost more than they need in the summer.

Infrared panels are on the ceilings of the living room, kitchen and one bedroom, and also at the top of the double-height void. They radiate heat down onto surfaces like the concrete slab, which then themselves release heat.

They also find it very easy to live with too, with very little interaction with the technology.

Being a Passivhaus they had been very careful about how much window they designed on each elevation. They knew they had a higher risk of overheating in their bedroom, which has a fixed, large, west-facing window and then a smaller opening window. As they were going to be the end users they decided they were happy to interact with the building in order to keep the design they wanted and prevent overheating. During the summer they do purge heating at night by opening the shower-room roof light, open the bedroom window on tilt and leave the en-suite door open. They also have opening windows in the upstairs and downstairs halls for cross-ventilation during the day.

Their experience of building and living in their own Passivhaus has led to them making a commitment in 2020 that Paper Igloo will only design their new builds to the Passivhaus Classic standard as a minimum.

Make sensible decisions at every turn

Maintaining a spreadsheet was helpful for Mhairi to keep control of the budget. Every week she would take the bank statement and rigorously check what things had cost against what they had predicted they would cost, and then adjusting how much they had left to spend.

Martin's tip for anyone doing some of the building themselves, or if the budget is limited, is to get someone else to make the shell wind and watertight as quickly as possible. This will mean the building won't start to deteriorate from the weather, and you're free to take your time with the rest.

And finally, do as much research as you can. This applies in terms of funding, materials, construction options, etc. There are generally lots of options out there so there is no need to go for the first thing you come across. Then make sensible decisions at every turn, as even the small amounts add up.