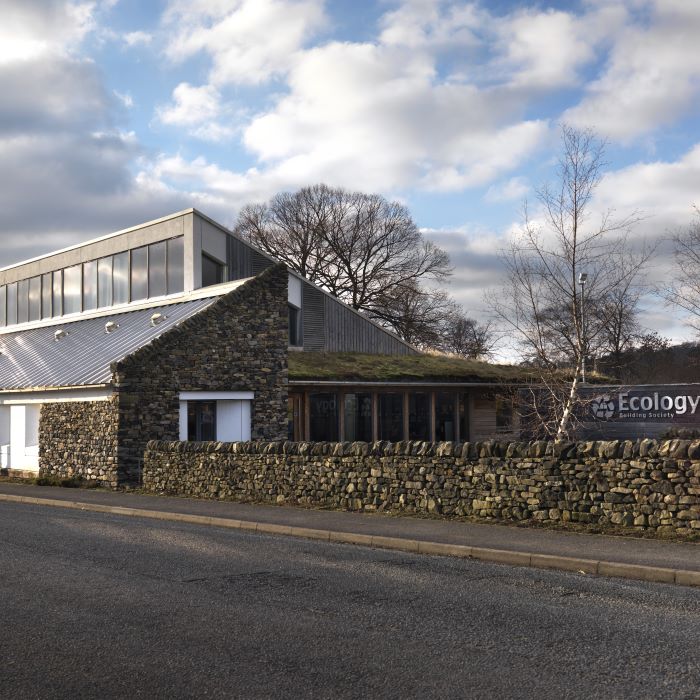 Paul Ellis was an early investing member back in 1981 when Ecology Building Society was formed, and has been Chief Executive since 1995.

Founding members had a shared interest in environmental causes

The ten founders had met through their involvement with the Ecology Party; the forerunner of the Green Party, and had a shared interest in self-sufficiency and low-impact living.

They were individuals looking to buy properties to renovate to reasonable energy efficiency standards, and without doing too much work. What they found was lenders were very restrictive and uninterested in providing support. They would demand certain works such as ripping out stone floors and putting in damp-proof courses that weren't really needed, but that they felt would minimise their risk.

“So, they’d often say they’d lend the money, but only once all the work is done, which wasn’t the point because everybody wanted to do their own work, be self-sufficient and learn building skills. So, they would be forced immediately into trying to get others to do the work and they were probably not going to have those kinds of funds available.

So, the building society was setup to really encourage that ability to take properties and bring them back into good use to a reasonable standard, but not to provide expensive kitchens.”

They are the youngest building society

At the time they decided to set up a building society, there hadn't been another done for quite a while beforehand, and they are still the youngest in the country. Paul believes a change in the regulations is the reason for this. In 1981 they only needed ten investors with a maximum of £5,000 to actually start the building society. The authorities caught wind of it and changed the rules to increase that amount. Luckily they managed to get the paperwork signed with five minutes to spare before the rules came into enforcement!

Building their own premises seemed a natural step

With the business growing it was necessary to find new premises, and after considering renovation they decided that building their own offices would be the best way forward. It could incorporate some of the techniques they were asking their borrowers to consider, and be a bit of a test to see what the issues were. And while the building has largely been successful, there are certain things they would now do differently.

The building dates back to 2003, before Passivhaus was well-known in the UK. If they were to do it again, or when they extend it, they would use Passivhaus concepts.

Paul says they were fortunate at the time to have the advice of eminent energy efficiency experts, although they had to compromise some of the ideas slightly to create a warm, welcoming space to live and work in.

There are two distinct elements to the building. One part focuses on long-term energy use, with large amounts of concrete but highly insulated and built to a good level of airtightness.

The meeting room area of the building was entirely constructed from straw bales, with a clay plaster render on the inside. Some of their members even came along to help with the construction while learning the techniques of building with straw.

Throughout the building they have tried to make as much use as they can of recycled, reclaimed and other materials that have low embodied energy.

Paul would encourage anyone at the beginning of their self build journey to take a look at their website or give them a call to discuss their plans. While they wouldn't immediately be able to give approval, they might comment on their ideas of budget and whether they think it could be viable for what is being proposed.

In some cases they can be communicating with people for years who haven't yet found their plot, but the majority of time people will already have a deposit and a plot.

“For us to make a decision, we have to be sure that there is something here which is going to work in terms of energy efficiency or wider environmental considerations, and so it’s hard for us at the outset to give more than a rough picture of what we can contemplate because we don’t know the nature of the building.

For us as a lender, the actual nature of the building, the finished product, is quite important to us. For other lenders, it would be more of a focus on the finances. For us, it’s what the building will achieve.”

During initial discussions they would ask about the techniques and materials the borrower plans to use, and take a view on whether or not they think it's a project that will work, by getting an understanding of whether the individuals understand those techniques and whether it will work in practice against their budget.

Paul says that a good development has been more borrowers these days employing architects who have a strong knowledge of these techniques.

Typically, their projects will have staged payments, although they aren't set at a predetermined, fixed stage. Instead the borrower contacts them to say they've done a certain amount of work, at which time they will get it valued and release money against that.

“That introduces a certain level of flexibility. Obviously, internally, we do track and monitor the progress of the building to make sure that it’s remaining on track. And that’s because we’re looking after our members’ money. We’re making sure they’re secure. But within that, we can be quite flexible when those releases will happen to suit the circumstances of the borrower. And that might be that they’re tying into other financial resources as well. They might have monies that are not quite available or whatever, so we’ll take that into account.”

Paul advises buyers to know their site well, to avoid unexpected costs and delays. Understanding issues with boundaries, hidden structures and general groundworks will be an advantage.

He also recommends a budget contingency of ten percent, which is something they will look for in the costings.

Ecology have a varied client base, but not too many first-time buyers. Those they do get tend to have been gifted a plot or had help with their funding, and more commonly are carrying out renovations.

While Ecology like to support renovation projects, which was mostly their emphasis in the early days, the tendency now has been for more self builds.

“And you can see why, in some respects, because there’s been a lot of development in green building techniques, in products, and you can start with a blank sheet and design in energy efficiency from the start.”

From an environmental point of view, Paul sees the need to improve the existing housing stock. They are working with companies, cooperatives and government departments to find a way they can create models to encourage more people into taking on renovations and retrofits, by providing systems of support and information, and making it easier for people to engage.

Their self build clients tend to already be fairly well informed and have carried out research and engaged with organisations like the Passivhaus Trust or AECB. And for those less well versed they might question certain aspects, for example, whether they need all the renewables when they haven't really considered insulation.

Another form of construction they are keen to encourage are kit homes that are semi-constructed off-site. They often come with some guarantee of energy efficiency and avoid many of the pitfalls that can occur on site.

Financial benefits for the most energy efficient

Ecology provide discounts for the full term of the mortgage, based on the property's standard of energy efficiency upon completion, with Passivhaus giving the maximum discount.

Progress is being made

Paul believes in their early days they were lone pioneers, but gradually now they are seeing advances in the green building components industry, with exciting new products and more companies trying to do the right thing.

“So, it’s almost like despite the drift of government policy, business, companies, individuals, cooperatives are leading the way on this because they know it’s not only good for the planet, it’s good for society, it’s creating sustainable jobs, and it is beginning to happen.”

He is also seeing a push on the Green Finance Initiative, looking at ways to increase the flow of funds to green investment products.

Something that Ecology are doing to assist with this is they're working on a project to create an energy efficiency mortgage model that would be available across Europe. It would enable more mainstream organisations to create preferential financing for mortgages on properties that are making a difference to our carbon footprint.

Download a transcript of the interview with Paul Ellis.