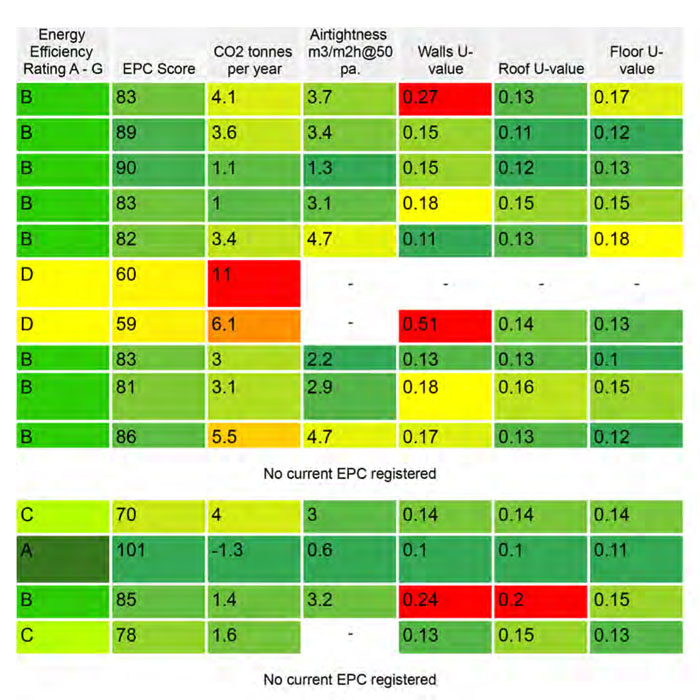 HPH311 : Should we celebrate architecture that performs poorly?

Richard Hawkes from Hawkes Architecture reviews the Energy Performance Certificates (EPCs) of the RIBA House of the Year longlist and asks why we are showcasing poorly performing architecture.

Richard Hawkes is the founder of Hawkes Architecture, which has developed a speciality for designing outstanding houses that are built in open countryside. There’s a clause in the National Planning Policy Framework that makes this possible in exceptional circumstances (and Richard has been on the podcast before to explain how it works).

However, in this podcast he's going to be reviewing the EPCs of projects that have featured in the RIBA House of the Year competition.

Measuring performance is an important check

When Richard built his house Crossway he received funding from Cambridge University to monitor various aspects of its performance. The research wanted to explore building physics and lifestyle.

So sensors were placed in various parts of the construction, including on the breather membrane layer, within the insulation and inside the thermal envelope.

The temperature was measured at these various points as well as relative humidity.

In terms of lifestyle, early versions of OWL Monitor and Current Cost Monitor were used to measure wattage and time.

Richard gives an example of finding out how much his iPhone cost to charge over the course of a year. It was just 35 pence! In other words we have very little sense of which appliances are using the most energy.

Building performance evaluation should be commonplace

An EPC is a rough guide to how a building performs

An Energy Performance Certificate (EPC) is a document that tries to reflect the energy efficiency of a building on a scale of A-G. Thus an A-rated property should perform the best and have the lowest bills. Although it records many useful aspects of the building, such as insulation values and airtightness, it makes a lot of assumptions in the Standard Energy Procedure calculation (SAP). Therefore it has plenty of critics who conclude it is inaccurate.

It is a legal requirement that all buildings have an EPC and therefore if you build a new house you will need one before Building Control will sign off.

In order to get an EPC, an energy assessment will be carried out by an accredited energy assessor. The certificate will then be valid for 10 years.

You can look up a building's EPC using a government database – England and Wales, Scotland and Northern Ireland.

As there is less information available for older buildings they use a slightly different system called RdSAP or Reduced Data SAP.

Crossway has recently been reassessed with RdSAP

With EPCs introduced in 2007, Richard's self build ‘Crossway' was one of the first houses to need to renew its EPC. Despite having used the original SAP for the first certificate the reassessment had to use RdSAP!

“As I understand it, Reduced Data SAP doesn't have any allowance in it for MVHR. You go what?! What other things did it not have?”

Even the assessor added to the list of failings saying there was no way to account for solar gain and no way to add airtightness results.

***Fortunately since recording this podcast Richard has found out that the SAP accredited body, Stroma, have agreed that Crossway can still be assessed under SAP, but there will need to be a new airtightness test.***

Richard keeps a log of all his practice's projects and he was intrigued to see how their EPCs compared to projects given the top accolades.

So he obtained the EPCs for all the latest RIBA House of the Year projects.

“I know that in these awards there is a requirement to submit details about energy performance, but the fact that the house that won doesn't actually have an up-to-date EPC certificate, doesn't have an EPC certificate that represents the building with that development, I find that problematic.”

Only one of the houses on the longlist of 15 projects was an A-rated house, the Devon Passivhaus by McLean Quinlan.

Richard then extended the research to cover all years of the competition.

In the duration of the competition there have only been two A-rated houses that have won.

Across all the longlisted projects (roughly 250 houses) the average airtightness is 4.1!

“We know how good heat recovery ventilation is at helping to reduce the heat requirement for a building, in maintaining air health and CO₂ levels, relative humidity. But for the average, across all of those buildings built just in the last decade to be that high I think it's really quite shocking.”

Conversely Richard's own practice Hawkes Architecture has 17 projects to date and every single one is an A-rated house. The average SAP score of his projects is 102 compared to the average of the House of the Year projects being just 81.

Richard points out that improving building regulations is one way of changing the status quo.

He also mentions that RIBA even has the 2030 Climate Challenge, which is a much more stringent benchmark.

However, the House of the Year competition demonstrates that RIBA do not consider performance essential.

Architectural excellence ought to have a technical requirement

“It's really important that our buildings are responsible with the way they consume resources. And I don't believe that they are judged in that way, either in what they used in their operational life, in energy terms, or the energy that goes into making them, disposing of them.”

RIBA House of the Year competition