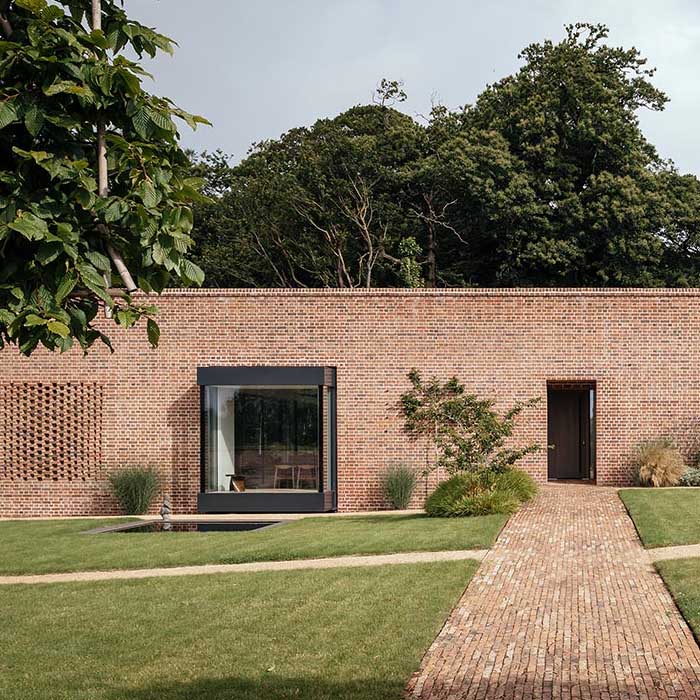 HPH306 : Building an exceptional house beyond the walled garden – with Nigel Dutt

Nigel Dutt tells the self build story behind Devon Passivhaus, a Paragraph 55 build.

Nigel and Eileen Dutt worked in computer software all their lives but maintained a lifelong love of architecture. Upon retiring they moved to Devon and it was always at the back of their minds that one day they would like to build their own home.

About 10 years later it was a piece of land a stone's throw from their house that got them wondering whether it was a potential plot. It had been overgrown with tall leylandii and used as a dumping ground but as it was cleared the site looked more and more promising. The one challenge, however, was going to be getting planning consent.

At the time, Nigel and Eileen perhaps didn't realise the uphill struggle they were about to face. They knew there had been two failed planning applications but undeterred they bought the site anyway. When they submitted a pre-application to test the waters, the planners took a negative stance and suggested the Paragraph 55 route (then Paragraph 79 and now Paragraph 80) was the way to approach it.

Development is generally confined to settlement boundaries that exist around villages, towns and cities. Building outside these is virtually impossible. However, there is an exception clause in the National Planning Policy Framework that makes allowances in special circumstances.

Although Nigel's site sits between two other plots and might appear to a laymen as an infill site, the whole parish had been declared as open countryside.

Nigel explains the options under Paragraph 55 (as it was back then):

[The house must be] outstanding architecturally or innovative, raising the standard of design in rural areas, that it reflects the highest standards in architecture, and that it significantly enhances its immediate setting.

Pinterest was a useful tool in shortlisting an architect

Nigel and Eileen have always read architecture websites and noted down particular architects they liked. Nigel comments that the ones they particularly homed in on ‘had almost matching Pinterest boards' of interests to their own and so McLean Quinlan were hired.

The architecture is a response to a historic wall

Although the cleared site was now just a patch of grass, running 70 metres down the length of the plot was a 12-foot high brick wall which had once belonged to the country estate. Two hundred years before the walled garden had played an important role supplying fruit and vegetables to the main house.

This was clearly the anchor point for the whole project and the architects were keen to use red brick for the front facade.

Nigel says: “They didn't want to do a slavish imitation, a pastiche of it. So it was new bricks that matched the old bricks, but the house is altogether neater and sharper looking than a rural, walled garden wall.”

It's not the planners who decide whether a project fulfils the exception criteria but an independent design review panel.

This means developing the designs when there is no guarantee that the project will ever get the green light.

The design review panel quickly came to a conclusion

After producing a 100-page design and access statement with their architects, they gave a 30-minute presentation to the panel. The good news is that their project was deemed to meet the criteria.

The planners chose to reject the panel's judgement

Amazingly the planners are not obliged to accept the findings of the design review panel.

In this case, the planners still felt that the project did not meet the exception criteria and to build anything would detract from the site… in other words they didn't really want another house.

As they were not forthcoming the next step was to submit a full planning application, although the planners gave advance warning that they would recommend refusal.

The support of a local district councillor made all the difference

It was not quite the end of the story because the local district councillor, who was also a member of the the Development Committee of the local council, requested that they go to committee because he disagreed with the planners too. He was positive about building an eco house and his opinion was that the local district should be proud to have a Paragraph 55 build on its doorstep.

So Nigel got the opportunity to appear in front of the development committee and speak for three minutes. The main point he made was why go to a professional Design Review Panel, if you then pick and choose whether you like what they say.

However, he suspects that one of the main reasons it was approved was because they had their direct neighbours supporting the scheme. They had lived next to this unsightly spot and could see an exemplar house would be a massive improvement.

The committee chairman made the point that they're very used to people making the three minute pitches against applications, but it's very unusual to have third parties come in and support an application.

The scheme now had the go-ahead.

The biodiversity of the site would be dramatically improved

Eileen took control of the planting around the house, which would include 120 trees, 300 metres of hedging and thousands of plants.

And they later got an opportunity to buy part of the walled garden next door (and breathe new life into it).

A key constraint became the height of the house

With the historic wall being such a crucial part to getting a planning consent, they did not want to build above it and that led to it being a single storey building.

Nigel laments the fact that in order to get the space they wanted they had to dig down.

We've got a partial basement, which had never crossed our mind, but to get the square footage that we wanted and also to have somewhere to put the plant room and then with a flat roofed house, somewhere to use as a attic equivalent we went down. And it to some extent spoilt our embodied carbon credentials, because by definition, you're then building a hole, sticking a concrete box in it, etc. So we knew that was a downside and also in cost, but we bit the bullet and did that.

They valued the input of a Passivhaus consultant

Although the architects, builder and supplier of the SIPs system were familiar with Passivhaus principles they hadn't worked on a certified project before so they engaged Passivhaus consultants WARM for input.

This helped identify key areas of the architects' design that might prevent them from achieving Passivhaus standard (in terms of airtightness, thermal bridging, etc). What's particularly interesting here is the architect's concept is largely intact with a few large glazed areas still in the finished design.

The shell of the house was up in two months

The house was built with 4wall advanced SIPs panels which were manufactured in Devon by a company called Tribus.

They were able to complete the entire infrastructure of the house, including floors, windows and roof within two months. This also delivered all the airtightness barriers with the exception of the membrane to seal the roof which had to be done by a specialist.

The house is all electric

Due to their location they have a private borehole and private sewage system. This also means that their only ‘bill' is the electric bill.

However, with solar PV and an air source heat pump they are 40% energy positive.

They generate roughly 10.5MW per year but only use 7.5MW. Overall this means they receive about £1000 per year (which includes a grant for using an air source heat pump).

This is a stark contrast to their old house (which was a similar size) where they were paying £4000 – £5000 for all bills. And of course there's a carbon benefit.

I calculated that it's something like 12,000 kilograms of carbon a year for running the other house. And it's about 300 in this house, and then that, again, is offset by the fact that we contribute to the grid from our solar power, which actually, according to our certifier gives us a negative footprint to the tune of 0.5 ton – 1 ton of carbon dioxide a year.

Without an external blind the 20m2 rooflight wouldn't be viable

As you enter the house the tiled courtyard acts as an extension of the garden. Daylight is brought in from above by a four-by-five square metre rooflight.

It's unusual to see a Passivhaus with such a large rooflight, because the gains with this orientation of glass are typically 5 times greater than a window on the south-facing elevation. In practice this means if it's a sunny day the blinds must be closed.

If it's a reasonably sunny day, we close it from the beginning of the day. And we find that isn't a problem because it just means you get a slightly shady interior, which is actually quite relaxing.

The south west facade also posed an overheating risk. It comprises a wall of glass with no shading! However, Nigel and Eileen did have a plan up their sleeve to retrofit shading should it be a problem. It hasn't actually been an issue, with temperatures rarely getting above 25 degrees. And the long term plan is to use the foliage from several silver birch trees that they've planted to provide summer shading.

The only time we get measured overheating is when we're away and we don't have the option to open the doors and windows. And then we've seen 30 or 32 for a few days in the house. But it doesn't matter to us because we're not there. And we find even coming back with the house like that, we can get it back down within an hour or so to something like 24, 25.

Having spent a lifetime in software Nigel is well aware that fixing anything in the design stage saves money.

An airtightness champion is a good idea

If you're tackling a project like this Nigel recommends employing someone to oversee the quality of the work. Russ Hancock from Goulden & Sons, who was the on-site project manager, became a convert to Passivhaus. Not only did he do training with WARM but he was always on site to check the work being done and make sure that everyone on site understood the goals of the project and what could jeopardise its success.

Passivhaus does not constrain design

Devon Passivhaus has been shortlisted for a number of awards, including the UK Passivhaus Awards, and Nigel believes this validates the design review opinion and shows that Passivhaus buildings can make great architecture.

Find out more about the UK Passivhaus Awards

HPH306-Nigel-DuttDownload a PDF transcript of this episode

Ben reflects on what it's like to live in a Passivhaus

Homebuilding & Renovating invited Ben to write an article on what it's really like to live in a Passivhaus.

This is what he came up with: 5 things to know about living in a Passivhaus.