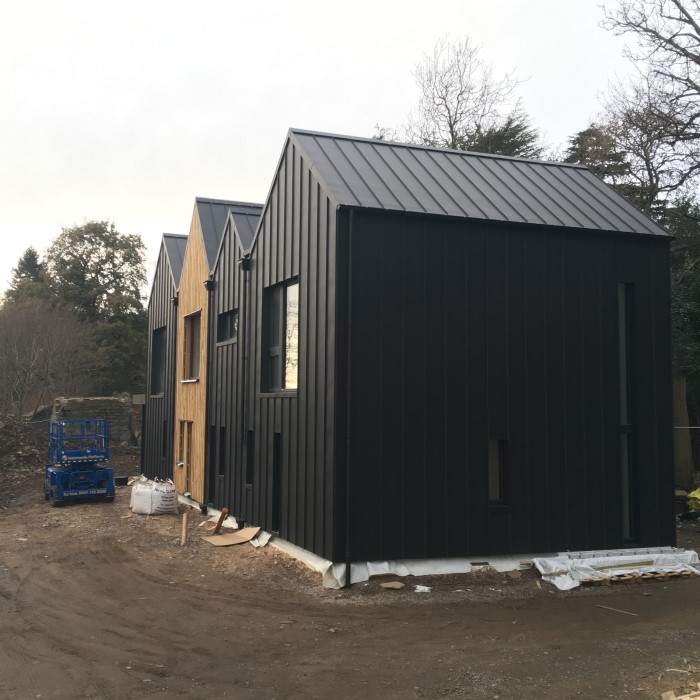 HPH303 : What does it take to project manage your house build? – with David Arrenberg

David Arrenberg explains why he wanted to project manage his self build, what the work entailed and how much of his time it took.

Originally a civil engineer, David was just starting to get into project management in his job at Scottish Water when he started his self build. With the skills and training he acquired in this role, he wasn't daunted by taking on the job of project managing his own self build.

Project Management is about being organised

David says that project management as a profession isn't complicated: it's just a case of being very organised and making sure that you know the order of things. In his professional capacity, he is used to working with programmes, understanding the need to allow for space in them, and appreciating what things might cost and what could cause delays. Compared to a big, multi-functional project at work, taking on the logistics of his house build seemed quite straight forward and just a case of breaking it down into its parts.

They didn't have to search for land

David and his wife Jenny were fortunate in that the plot of land was available to them, even before they had a desire to build their house. It was owned by his aunty, and with his mum already living in a listed building there the opportunity was gifted to them to build in the woodland that surrounds it.

In the two years it took to transfer the title deeds over and arrange finance, David worked on clearing the site where the house was to be built and spent time getting ideas from magazines and the internet about the kind of house they might build.

Protecting the woodland was the main planning concern

During that time, David also worked through the rules that were relevant to getting planning permission. With Invergarry House being listed, they had to make sure that their plot was at least 150m away and also had to overcome issues of overlooking other houses. But of biggest concern to the planners was how to protect the woodland. David had to pay to employ a specialist arborist to oversee the whole project from start to finish, working out how to get a driveway through the woodland without damaging tree roots. He also put together a woodland maintenance plan for its future upkeep.

With those issues out of the way, and having appointed Kirsty Maguire as their architect, getting the design of the house approved was relatively straightforward.

Working with Kirsty on what it might cost to build their Passivhaus, they worked on a basis of £1,700-£1,800 per square metre, which also incorporated a little extra for risk. Based on the planned area of their building, this gave them a predicted cost of £300,000. The final cost of the build actually came in at around £315,000 which included all fees and landscaping.

Being able to borrow against Jenny's business and using savings meant they were able to avoid having to formally borrow money.

David brought in his own sub-contractors

Kirsty's experience of Passivhaus was what drew them to her, and they had a good relationship working together, taking each other's ideas on board. She took them through the outline and detailed planning stages and provided ad-hoc advice when required with minor issues and details on site.

Being local, David had many more contacts than their contractor Craigs Eco, so they had what they called an ‘open book policy'. This involved Craigs Eco providing a full Bill of Quantities breaking down every item, and within reason and where possible, they were happy for David to bring in his own sub-contractors and materials if he was able to get them cheaper. This did come with the risk that if he delayed another part of the works with his own sub-contractor then he would be liable for any additional costs incurred.

Many of the sub-contractors were family members or had connections with their family, but David ensured he only brought in people who he thought would be able to fit in with the Craigs Eco team.

David was aware of the limitations of his own skills, so felt it was far better to save money by negotiating on prices, rather than tackling any of the trades himself!

The flexibility to be able to negotiate prices of materials himself, actually gave David big savings. Having been alarmed at the initial quote of £105,000 for the zinc cladding, David managed to eventually find a supplier who could provide it for £55,000.

Buoyed by how much he'd saved on this first item, he admits he became slightly addicted to going back and forth between suppliers to try and get the best prices. He says it was just a case of having the confidence to ask, and when it's your own money then you find you have plenty of enthusiasm to ask for discounts! The results he says were massive savings, while also ensuring they didn't forfeit quality.

It's about keeping on top of things

Access arrangements were something that David had to keep on top of in his role managing the project. The approaching track is only three metres wide so they did have the issue of deliveries arriving 300m away, without any way of being able to get them down to the site. For a time they had a small forklift helping ferry things across, but there were other occasions when, even though he had provided the track dimensions, he'd worry that he had a big delivery arriving and was going to have to take it piece by piece on the roof of his car!

Although not directly involved in the construction, David felt able to help out by keeping the site tidy and clean, and by making sure that everyone was able to get in and out unhindered.

The quality of finishes suffered a little towards the end

In general, David was really impressed with the quality of work on-site, particularly from the joiners and the zinc contractors. The only problems with finishes came towards the end:

“It's getting towards the end so maybe some of the money's running out a little bit. And the main contractor, starting to eat into his potential profits if you get them to do too much for what they have agreed.”

David's proof that it doesn't have to be painful!

The start of the project was a lot less time-intensive for David than the construction stage, as much of it was about waiting around for other people to do things.

He says he can't be quite sure how much time he spent working on it once the building work was underway as your enthusiasm takes over, but it was generally every night that he would be making calls and thinking things over. He estimates this was probably 20-30 hours per week, but it's not something he found painful.

With David and Jenny being in their mid-30s, they felt their energy levels were a definite advantage in managing the project relatively stress-free.

Even with their first child being born as the foundations were being laid, and approaching her first birthday when they moved in, they didn't find themselves being hindered by their change in circumstances at all.

You're not on your own

There's often a conception that project managing the build yourself means doing it alone, but David is quick to stress that's not the case:

“Project management is the name for it but you don't have to be a project manager. It's just being organized. That's all it is, trying to think of every element.”

Listen to our podcast with Kirsty: Progressing your house build plans before you have your land

Download a transcript of the interview with David Arrenberg