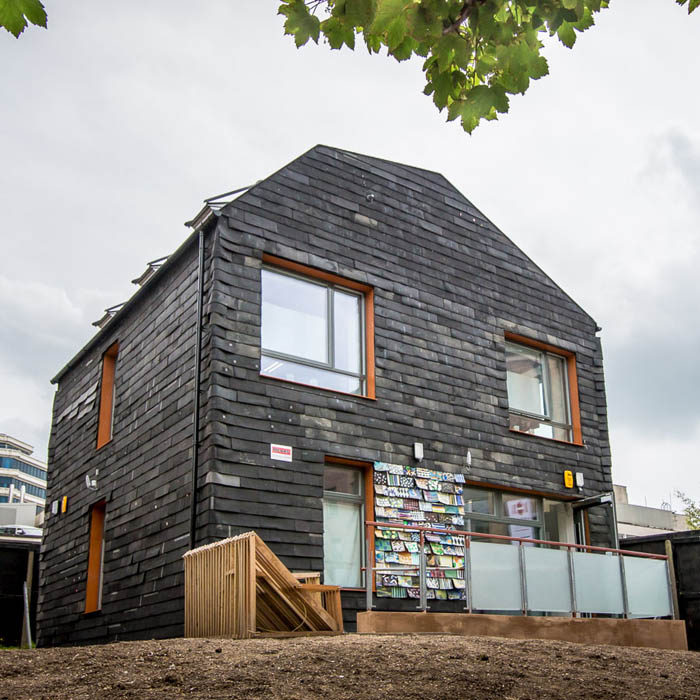 Duncan Baker-Brown from BBM Sustainable Design explains how we can reduce waste on our projects, given a little more time and with a different approach on site.

With the construction industry being such a big contributor of annual waste, he also shares strategies for how we could transform things if we treat buildings as material banks, which are built with deconstruction in mind.

Duncan Baker-Brown and Ian McKay set up BBM Sustainable Design 25 years. The company has a passion for finding environmentally friendly solutions to architectural challenges, and carries out research projects to inform his practice, and vice versa. Duncan also teaches at the University of Brighton.

The construction industry is a huge consumer of raw materials, accounting for around 50% of those that are mined across the world. The resultant deforestation and destruction is a key reason why Duncan believes we should be trying to consume far less.

Although on an international level many leaders seem to be ignoring the crisis, Duncan sees hope on a more regional level where groups and states seem to be taking matters into their own hands and making commitments to address climate change.

“There's no such thing as waste, it's just stuff in the wrong place”

Duncan defines a circular economy as being a world where one area's waste, is a valuable resource for another area.

The UK construction industry is responsible for 60% of annual waste

Traditionally, resources are thrown at a site in order to keep it busy and not have delays while waiting for materials. This means a tendency to over order on materials by around 10% for wastage, resulting in around 10-15% of everything arriving on site being thrown away. With this cumulative effect on site, it means that for every six or seven houses that are built in the UK, one house worth of waste will go to landfill or incineration.

Instead we should only be ordering the goods that are needed, planning the projects better so there aren't periods of delay, and value the materials that actually arrive on site.

We could also be shopping in a much smarter way. BBM do a resource map for their projects where they look within a 10km or so radius of the site and work out what resources might be nearby. That could mean a factory producing something, a woodland that's managed for timber, or even a building site that is being deconstructed where they can salvage materials.

“But it takes a different mentality and sensibility. And the big deal is the time to educate yourselves around the potential of a circular economy to provide a better product at the end of the day, and being able to be beneficial to the environment as well.”

In 2014, BBM completed the Brighton Waste House, an experimental project that was built by students under the guidance of the university. Initially the aim was to build a high performance house out of the material that normally goes to landfill or incineration. During the design and development stages they partnered Freegle UK, whose founder Cat Fletcher, suggested they raise awareness of the things that are thrown away on a daily basis, not just in the construction industry but in our everyday lives. It changed from being a project that proved construction waste was valuable, to a project that became more of a thought-provoker.

The house was subsequently designed as almost a container for the waste products: a vessel for holding lots of products that had been designed without an end of life strategy. They used the plastic waste products as low grade insulation, and included 4,000 VHS tapes, and 25,000 toothbrushes (all unused) that were collected in just four days from Gatwick Airport!

With 90% of the material used being other people's waste, it performs to around Passivhaus standards.

While they proved that it can be done, Duncan says it would take an experienced architect or contractor to understand the potential for using second hand material. With issues around insurance and guarantee of second hand materials, at the moment we don't have the legislation or networks to support everybody doing it easily.

Duncan certainly isn't saying we should be using waste plastic in our homes, and if he did the project again he would use a resource map for construction and other materials to make a building that was a material store for the future.

“What I would like to do is a project where maybe we find a building that is unwanted, and we deconstruct it and then reconstruct it with new owners, new use, new site. And the architectural challenge, apart from the deconstruction and reconstruction, would be how to tweak the building so it accommodates the new criteria – our new standards for insulation and energy production and that sort of stuff.”

Think through how you can limit waste on a self build

If you're doing a self build project, the best thing you can do is look to reduce your waste on site to zero. By using a pre-fabricated build system for example, you will only have delivered what you actually need. A further benefit is that things that arrive flat-packed and screwed together, could ultimately one day be unscrewed and reused.

Avoid using the wet trades as far as possible too. As soon as you start mixing things with water there tends to be far more waste.

Buildings can be material stores for the future

On a large scale looking at financial industry buildings, Duncan explains that many are only designed with a business plan of perhaps 25 years, after which time they're demolished and a new flagship building put in their place.

He describes a project in Amsterdam by ABN AMRO bank. It's an £18 million Circle Pavilion project, which has been designed so that when it is deconstructed in however many years time, the materials and components are assets that can be sold off or reused on other projects. As well as making financial sense it will avoid sending all the waste to landfill.

Duncan sees a future circular economy having two spheres: a biosphere and a techsphere. The biosphere being everything that is made of natural materials that can be reused a number of times before they eventually become compost for the natural world. The techsphere incorporates those things that won't decompose so will need more work to establish how they can be designed to be deconstructed and used again.

Corporate responsibility is needed for end of life strategies

This fits in with the idea of things being material banks, where at the end of their life they would actually be an asset.

The idea of lease agreements is gaining traction, particularly in Europe. One example is Philips who provide leased light fittings to buildings. The benefit to the end user is that Philips are likely to be supplying them with their most robust fittings because they don't want to be repeatedly coming out to change the lightbulbs. And from Philips perspective, at the end of their lifespan they are able to take back the fittings and use the parts to make new ones.

“And from a design point of view, and that’s whether you’re designing a light fitting or a phone or a building, it needs a different way of designing. You need to think about it differently, because you’re thinking about how to take apart the thing that you’re assembling as you’re designing it.”

Differences can be made on self build and large construction scales

On a self build scale, websites like Freecycle and Freegle can be a source of finding, or recycling materials. On a general construction industry level, Duncan says there will need to be changes to the buildings regulations to demand and facilitate reuse of materials.

“I’m trying to communicate a really clear message because a lot of people are going to be crunching carbon numbers etc and trying to be carbon neutral and all that sort of stuff. And I just think that’s really difficult I think to understand how to really do it, and I think it’s a lot more straightforward just to say carbon is one of the things that we’ve got to reduce, but we’ve really got to reduce the amount of water we use, the amount of energy we use and the amount of materials and components that we use when we’re designing, building, inhabiting, maintaining, and ultimately deconstructing the built environment that we live and work and play in.”

Download a transcript of the interview with Duncan Baker-Brown