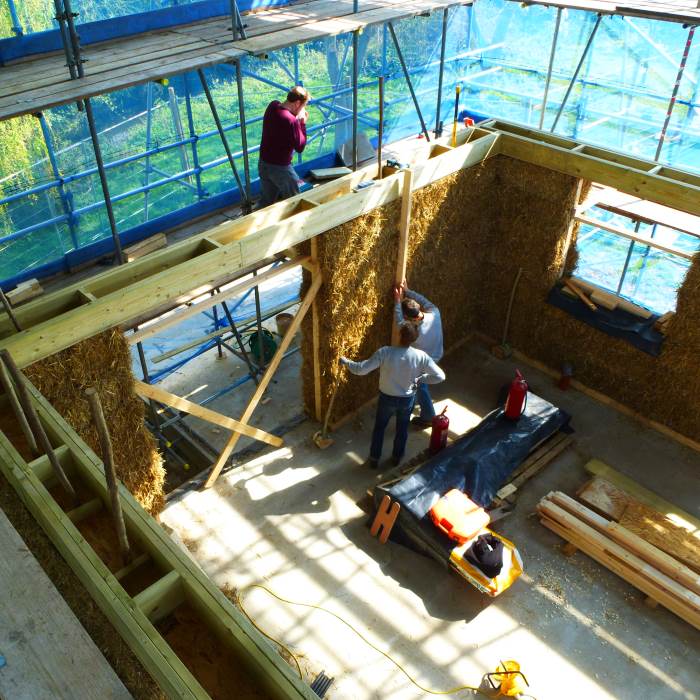 HPH225 : How to create a load-bearing straw bale Passivhaus home – with Andrew Goodman 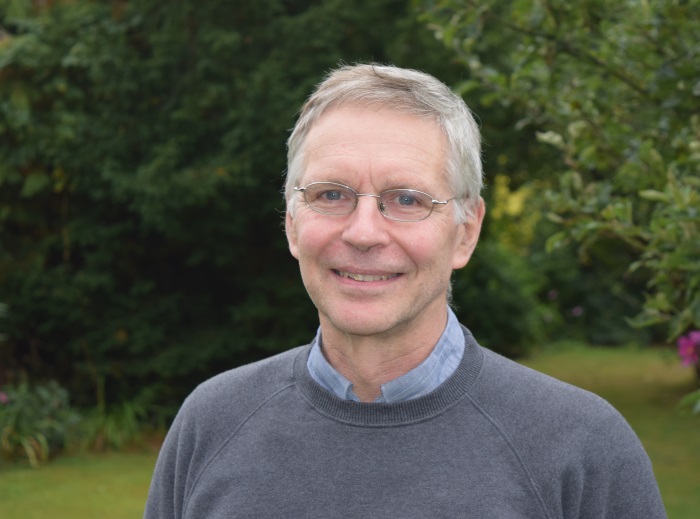 Andrew Goodman is an architect with over 20 years experience running his own practice, currently as a sole practitioner based in Hertford. One of his recent projects has been for Dave and Mabel Howorth, who were looking to build a straw bale home for their retirement, with the added challenge of wanting to achieve the Passivhaus standard. 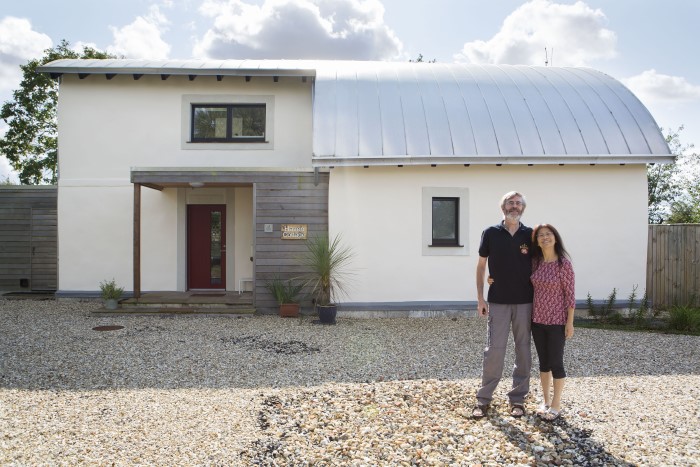 Dave Howorth already had an interest in straw bale buildings and had previously participated on one of Straw Works‘ projects. He was convinced that it was a good way to build and was also attracted by the affordability it provided.

It took several years for Dave to find his plot of land. When he bought it, it already had planning permission for a chalet style bungalow, which wasn't ever going to lend itself to either being built with straw bales or to the Passivhaus standard.

The plot was in the curtilage of an old, listed dwelling with thatched roof and lime plastered walls, and the local vernacular for Dutch barn style curved roofs also gave the extra ceiling height they were looking for, so these both provided a starting point for evolving the design.

Being a detached dwelling in an established orchard meant the trees would have some impact on shading the building in a positive way. 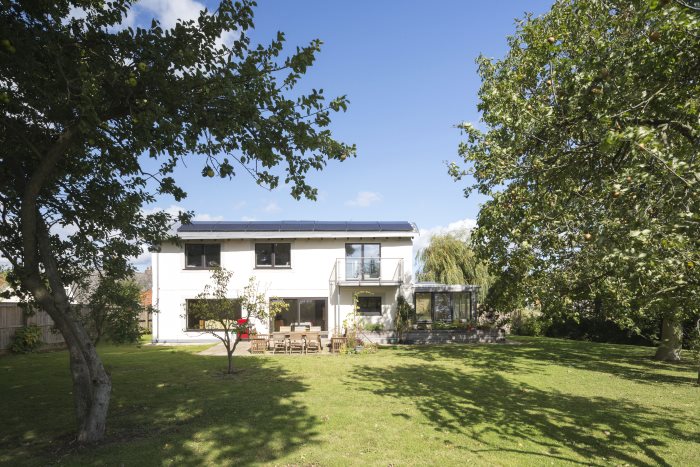 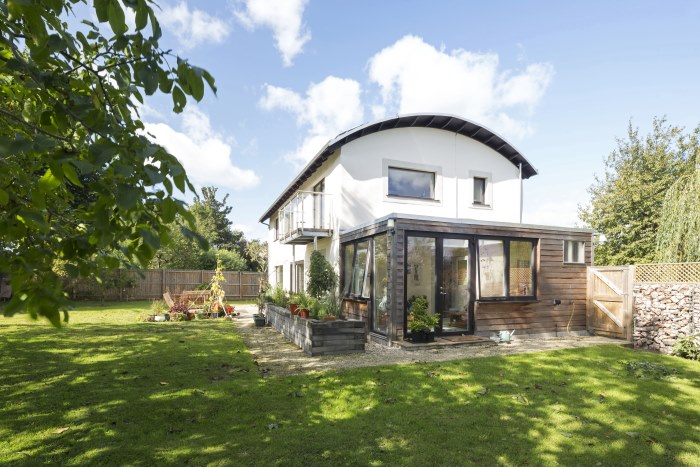 The house needed to be suitable for their future requirements

It was important to Dave and Mabel that the building should meet the Lifetime Home standard, which was about at that time (but since been partially absorbed into Building Standards). The standard had a dozen or so categories covering how someone with restricted mobility might approach and access the building, move through it with ease and move between levels if applicable.

The brief was to provide three main bedrooms, living accommodation, separate kitchen, dining and living room. The Lifetime element was incorporated by providing an extra reception room on the ground floor with access to a wet room, which could be a bedroom with en-suite in the future if needed.

A pre-application with the planners was largely positive

The foundation is an insulated slab system. Then there is a taped connection between the slab and the internal wall finish, which crosses over the base plate detail that you need on any straw bale construction. Instead of building first floor joists into the walls, they used a ledger beam approach attached to the box beam, with a membrane between the ledger beam and the box beam that connects the two plaster layers, the ground floor and first floor. 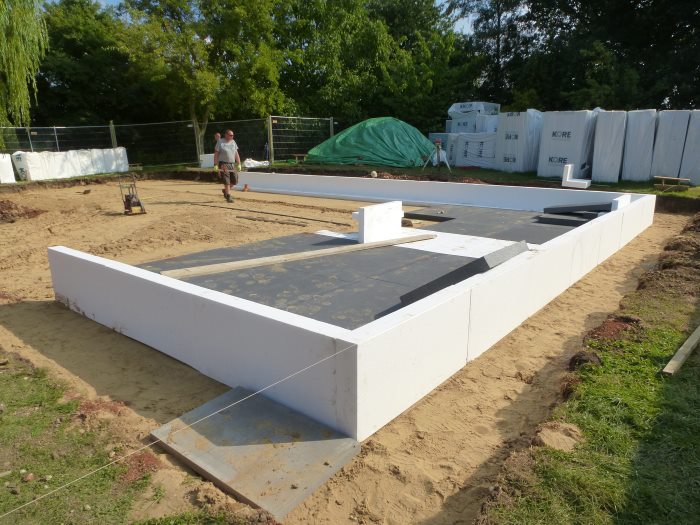 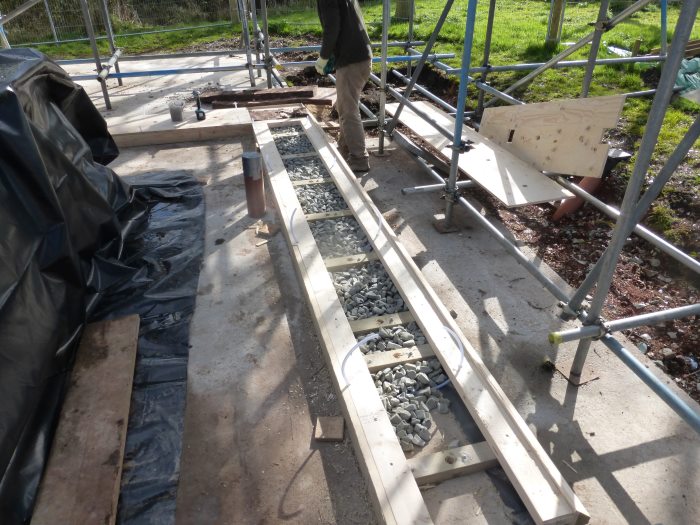 The curved roof uses a standard Intello membrane on the underside of the timber structure, which again is then connected to the render at first floor level. 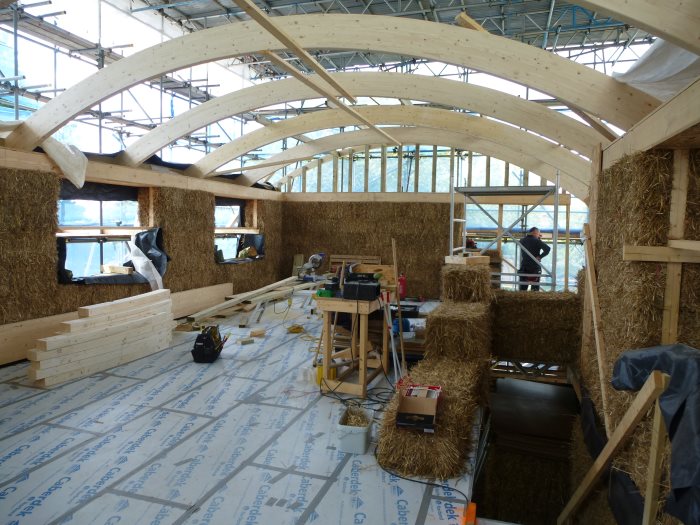 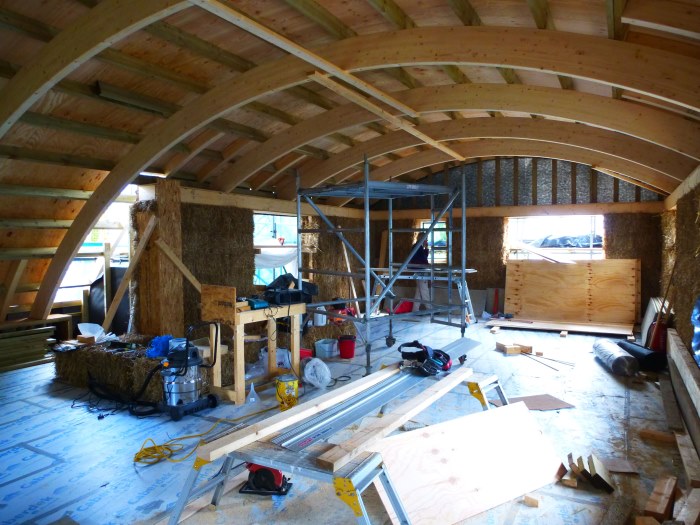 A previous attempt by Fran Bradshaw to build the first load-bearing Passivhaus straw bale house just missed out on achieving the standard. Hers used a structural timber frame, so the bales may not have been as compressed and loaded as those at Haven Cottage. Andrew's assistant was convinced that load-bearing the straw bales would be the best way to go, and by using a wet lime plaster on the inside as the air barrier, it shouldn't be any different than using it on a brick block cavity wall. Haven Cottage also has an external lime render. 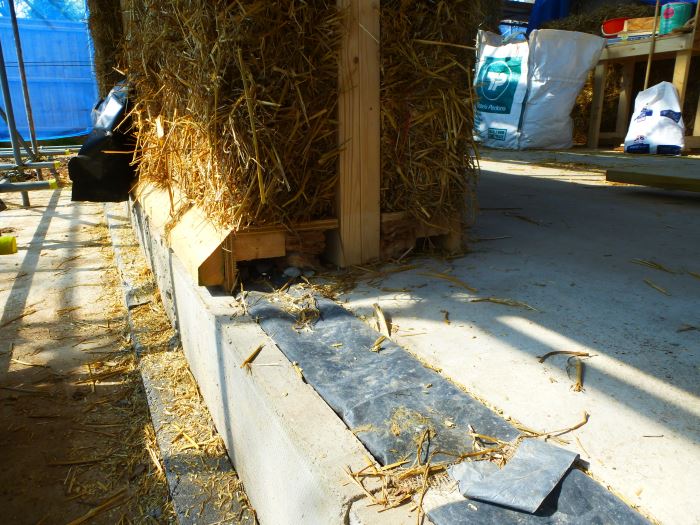 In terms of the construction, part of a ring beam is placed that can be used to compress the bales using wires that run from the base plate up to the top plate, which are then tightened. There is a typical compression of around 50mm for each storey height. Once it's compressed it is loaded with the next level of construction up to the underside of the roof. 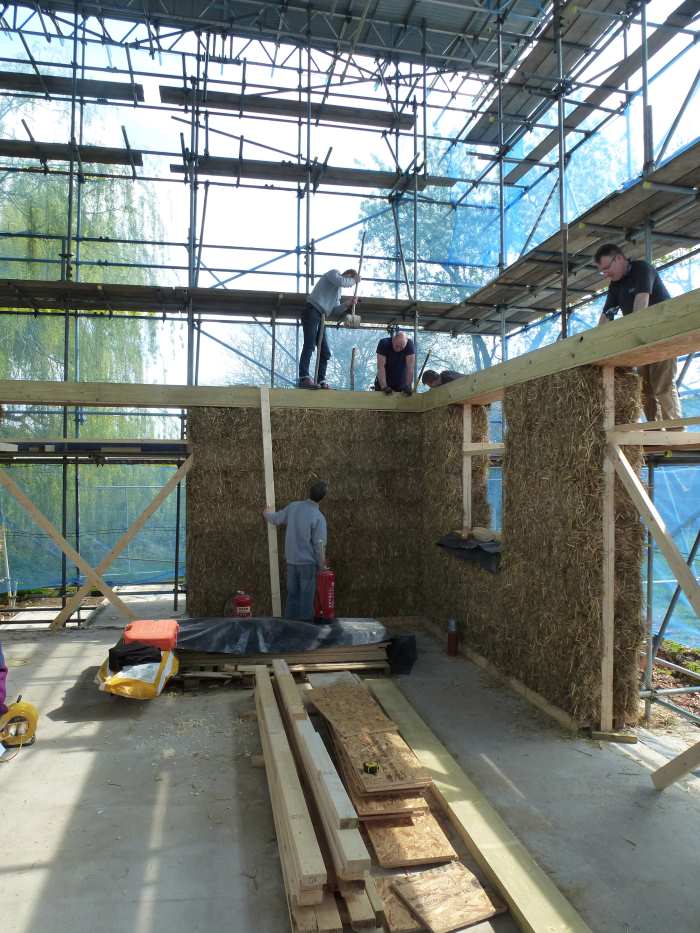 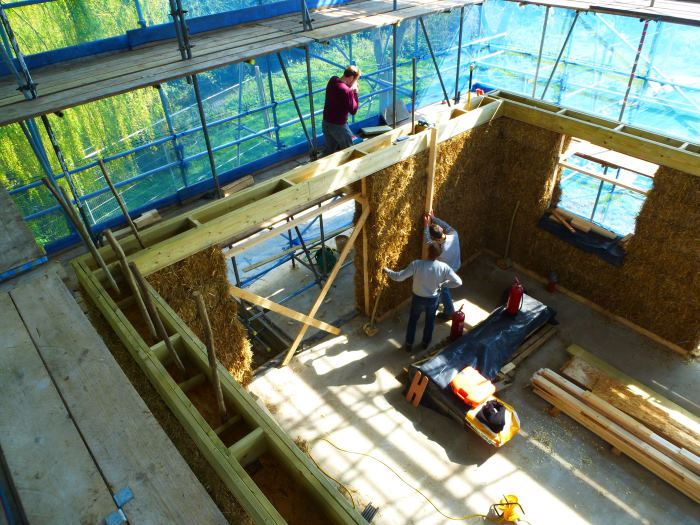 Together with the structural engineer, they worked out a system of curved laminated beams that are actually within the overall depth of the roof. The roof has 40mm of Warmcel insulation. The laminated beams are only 300mm deep.

“So, there's a double joist system that minimises thermal bridges, loses the curved laminated beams – perhaps unfortunately, but it keeps the underside of the ceiling simpler and therefore the Intello membrane just runs in a very, very simple way.”

Airtightness tapes were used to connect the windows to the wet plaster reveals, and time will tell whether the added movement that straw bales naturally have will cause cracks in the render and impact on the airtightness. Andrew recommends taking care to look at the building over time, checking the plaster and renders and making sure they are kept in good condition to ensure there is no moisture ingress. 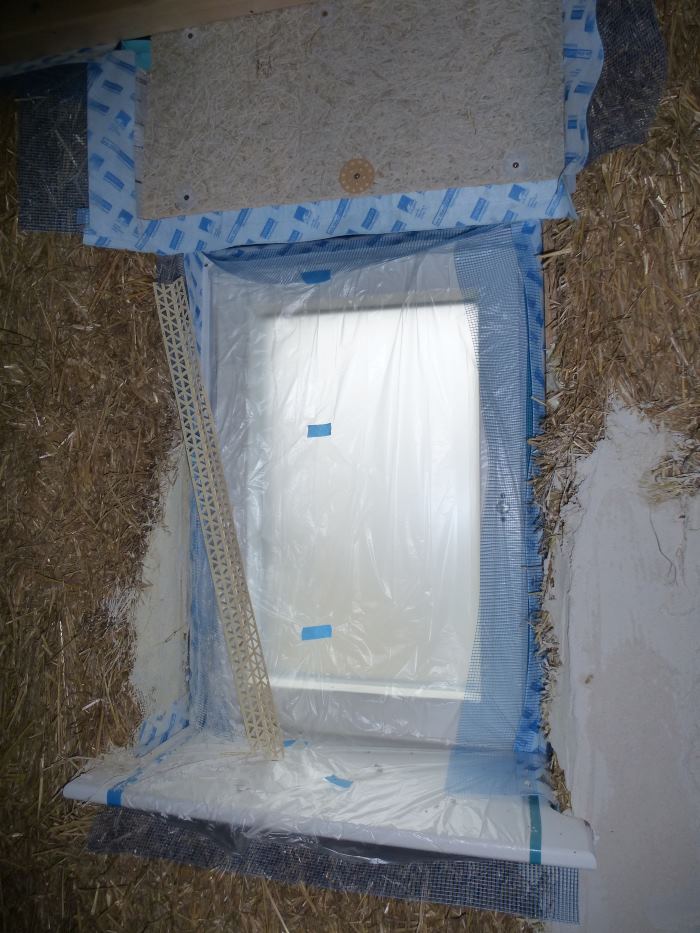 The straw bale construction process provided an education for others

Dave was able to take a 12 month sabbatical from work and project manage the construction. He used a specialist substructure and groundworker who did the slab and drains and anything else below the ground. There were a couple of carpenters who worked collaboratively throughout on all of the timber elements. Straw Works provided teams of people to build the walls in their usual method, providing training to people who were interested in learning about the skills of straw bale construction. There was also a specialist roofing contractor.

Dave did all the airtightness taping and installation of the MVHR system himself. 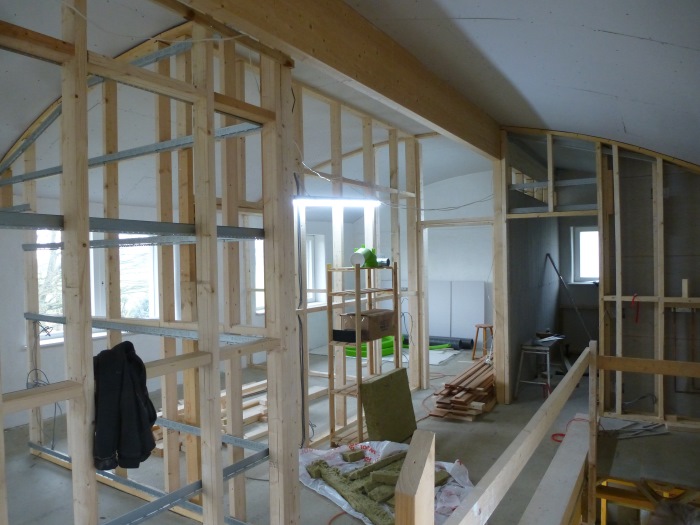 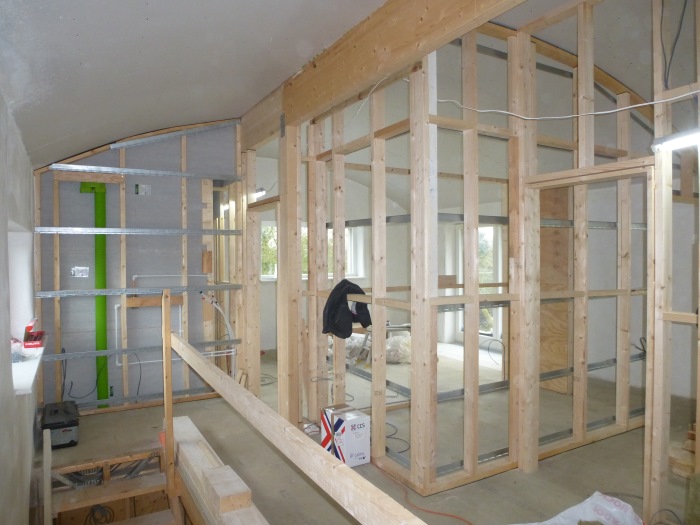 The original design and PHPP model for the building was using a gas-fired boiler for heating, but Dave decided, partly for cost-saving, not to install the gas main.

“There’s a duct into the building which a gas main could be fitted into in the future, should someone want to do that, but fortunately with the introduction of PHPP 9, the primary energy renewables option enabled it to be certified. Without that, it wouldn’t have been certifiable because it’s electric-only heating.”

There are three heaters in the house in the hallway and bathrooms, and a post-heater in the MVHR which raises the temperature a little bit above whatever it has come through the heat exchanger with.

Haven Cottage has solar PVs which provide all the required hot water in the summer, with a bit of Grid electricity needed in the winter to top it up. Passivhaus Plus Magazine has calculated that the building is actually making a profit on the electricity side.

Lack of straw bale experience was no obstacle

Andrew didn't have any experience of straw bale buildings before coming into this project, but wasn't daunted as he found sufficient information around to understand the normal procedure, and from that work out how to do things slightly differently to meet the needs of achieving the Passivhaus standard.

“I would love to build more straw bale buildings. I’m not convinced it’s a solution to our mass housing needs but there is definitely a place for it, especially within the self-build world, because of that collaborative nature of the process itself.” 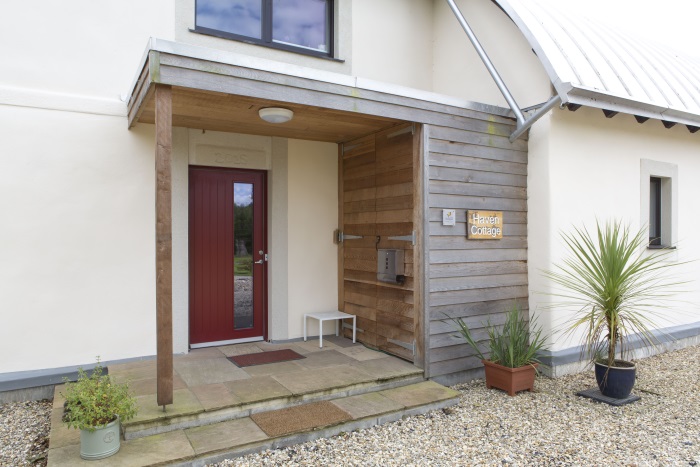 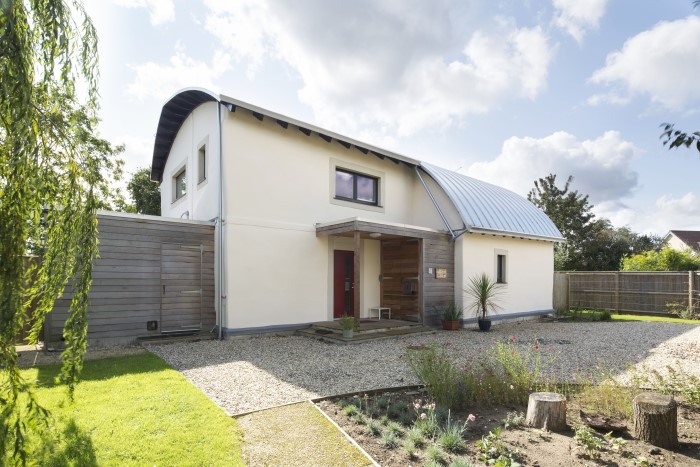 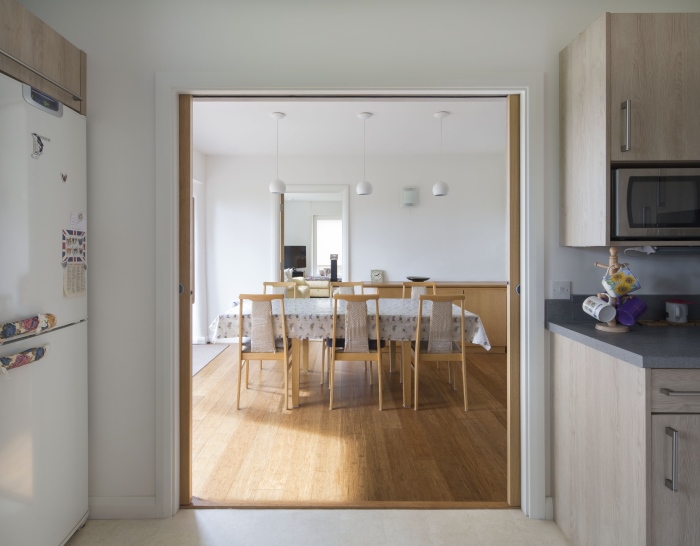 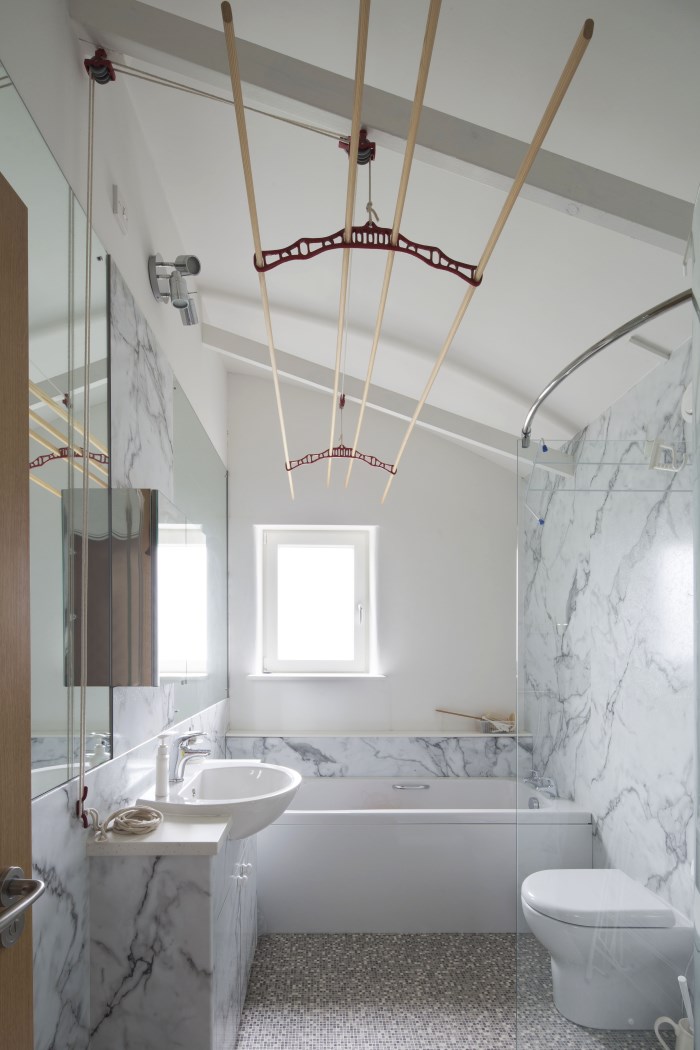 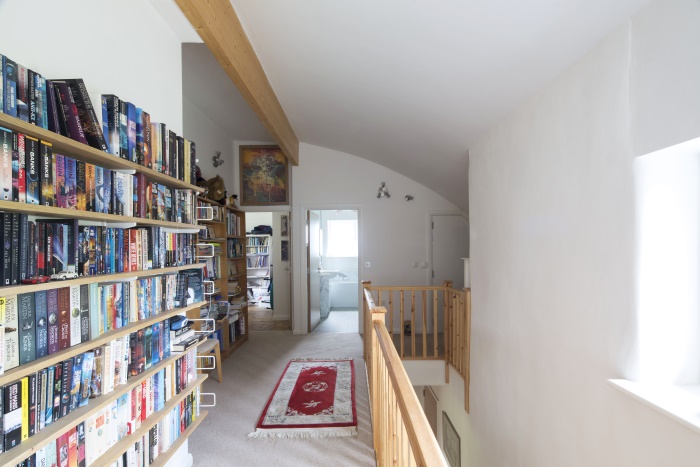 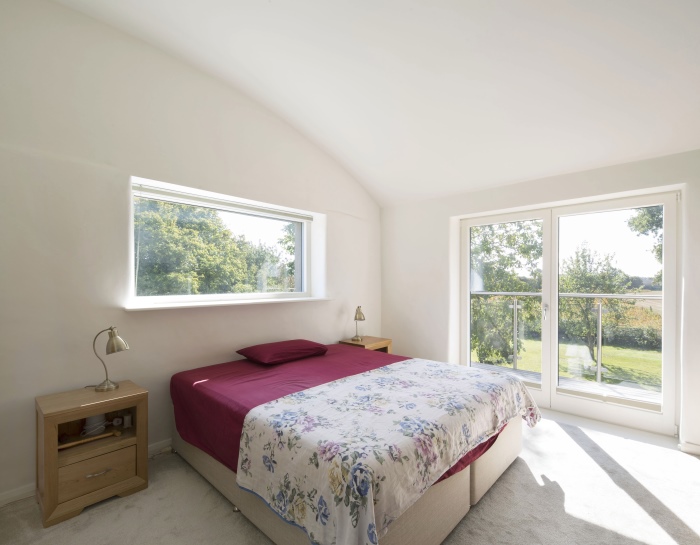 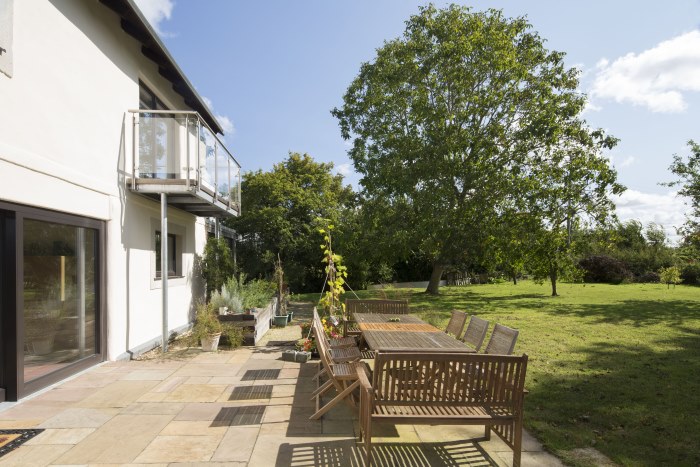 Download a transcript of the interview with Andrew Goodman.