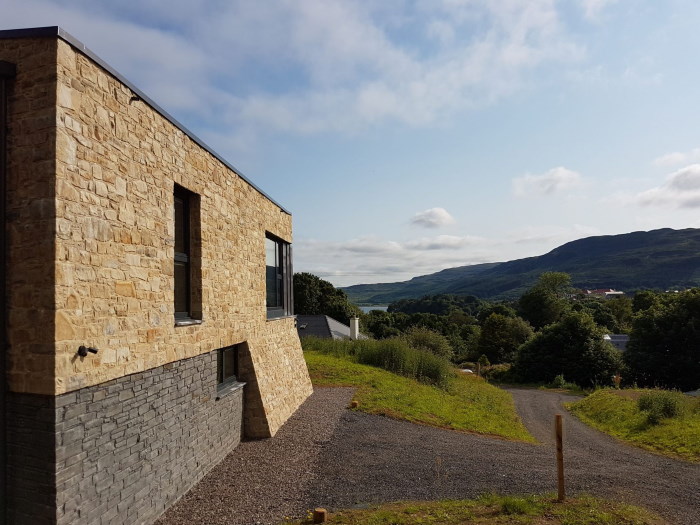 HPH314 : Getting a self build over the finish line, despite setbacks – with Mike Coe

Mike Coe gives a final update on his now complete Portree Passivhaus, that has seen budgets stretched, contractors disappear for a year, and a Covid lockdown!

Mike Coe is a returning guest to the podcast. We have been fortunate enough to speak with him about his previous self build, Cropthorne Autonomous House, and have been following his progress since moving to the Isle of Skye to build Portree Passivhaus with his partner Lizzie. Having been in the house for a year now, we pick up where we left off three years ago, in episode 259 when the house was almost watertight, and find out whether Mike has managed to be as hands-off with this project as he had intended!

He had started on the MVHR installation as soon as there was enough building there for him to work on. The main ducts that bring the fresh air in and take the exhaust air out, went in almost at the foundation stage, as they were assembled as the wall was being built that the ducts pass through. This way it meant they could be built into the wall, rather than having to cut out a large hole afterwards. He also started channeling out for power points before the concrete blocks were even up to first floor level.

The specification of the MVHR was important for Mike as he wanted to build this house with no heating system whatsoever. They selected a system made by Nilan, which also contains a micro heat pump. It's only around 60 or 70 watts, but it effectively aids the heat extraction process and makes it more efficient. It means that in the winter the heat pump comes on when the temperatures dictate it, making the incoming air temperature slightly warmer, and in the summer it provides a very small amount of cooling.

Their only other source of heating is from a single bar electric fire which they've used infrequently, just for the odd hour here and there.

It maintains a comfortable temperature

The internal temperature on the night they moved in was just 11 degrees (with a raging storm and a power cut for good measure!) But once Mike got the MVHR up and running a couple of days later, and they had a week or two of sunshine, and with the effect of the two of them living there, it took just a couple of weeks for the temperature to rise to 21 degrees. Since then, they have been pleasantly surprised at how well it keeps a steady and comfortable temperature, even more so than the Cropthorne house, despite its larger form and having been less fastidious in the attention to Passivhaus detail. Mike suspects this is because of using the concrete blocks which, as well as providing the structure of the building, also act as a thermal store. He is conscious that the use of the concrete blocks and steel means it has higher CO2 emissions from the manufacture than that of a lightweight timber structure, but this was primarily dictated by the planning department.

With a contractor and architect that didn't have experience of building a Passivhaus, Mike found one of his roles on site being that of quality control. When it came to airtightness tape, he was able to show them how the standard builder's merchant tapes would just tear like paper, yet the Passivhaus airtightness tape was incredibly strong and flexible.

They didn't mind and were happy for Mike to take on other pieces of work, such as some of the carpentry, especially as he and Lizzie were on site doing the MVHR and electrics anyway, and it meant the workload for their men was reduced.

It took twice as long to build as planned

The original plan was for a 15 month contract build period, but at the 10 month stage the contractor got called away to work on a 25 bedroom hotel extension, leaving just Mike, Lizzie and a freelance bricklayer to carry on with the work. This meant an incredibly frustrating almost year-long wait while the hotel project was finished, which unfortunately then coincided with the first Covid lockdown.

“So there we were, with another three months added on to the almost year long delay due to the hotel build. The hotel extension was sitting there virtually complete, but they couldn't open it because of everything was shut down because of Covid, whereas our house was nowhere near complete and nobody could work on it except me.”

Mike managed to use that time as productively as possible to keep the project moving forward. Without being able to access new building materials as the merchants were closed, he dismantled some of the temporary stairwells that the contractor had put in so he could use the timber for building the stud partition walls. He used all the plasterboard that was laying around that he could, rescued timber that had been thrown out and used that for the stud walls, and also managed to build a new desk. Psychologically he found all this beneficial as it felt like progress was still being made.

In total, the project took around 30 months to complete.

With the planning department selecting the most expensive option, they always knew that the budget was going to be tight. In addition to the overruns caused by the lockdown, a number of other bills came in that caused them to go over by £34,000. This included £8,000 to install a water pipe from the mains halfway up the hill, rather than being able to connect from the supply of the neighbouring bungalow that they owned and were living in, and £750 for a tree survey to make sure that the pipe wasn't going to damage any tree roots!

As they were running out of money and with cash being tied up in the neighbouring bungalow until it was sold, they had to take on more of the work than they had ever intended to do. Mike had been unimpressed with the plumber who had done the first fix, so ended up rectifying some of his work and also did the second fix plumbing. This meant he plumbed the washing machine, kitchen sink, dishwasher, and the fit-out of all the bathrooms.

With great reluctance, as it is a job he and Lizzie particularly dislike, they also ended up doing most of the decorating themselves.

One year on, there are problems to rectify

Having been in the house for a year, they are currently in the snagging period where the contractor will rectify some of the problems that crop up. Their contract allowed them to withhold a small percentage of the total payment, which will be paid once these have all been sorted. However, there are other problems which Mike intends to take on himself.

The door in the lower ground floor porch was never properly adjusted and would stick and not shut fully. When he got round to looking at why this was, Mike discovered that it was actually causing a serious damp problem. The damp had resulted in the hinges corroding, with the adjustment screws for the doors then being impossible to turn.

Something else that Mike will need to tackle, is an issue with the windows leaking. As they weren't a standard specification that the contractor was familiar with, they installed them but weren't confident to set them up, instead leaving this to Mike to organise. However, with all the other jobs and distractions going on, this got pushed lower down the list. With the driving rains they receive, several of the windows subsequently leak. Thankfully there are no serious structural leaks though, and when all the adjustments to doors and windows have been carried out then hopefully that should be an end to those problems.

During a period of extremely high winds recently, part of the zinc capping that goes around the roof parapet was torn off. Fortunately it doesn't threaten the structure of the house in any way and it's still watertight, but it's something else to add to the list of jobs.

He has some carbon-saving projects lined up

Now that they have freed up their cash by selling the neighbouring bungalow, and once Mike gets over a certain amount of self-builder fatigue, he is keen to make headway on some other projects.

The first is installing a PV array that will make the house run more efficiently, as it will contribute to hot water and charging their new electric vehicle.

He is also in the early planning stages of putting a micro hydro generator (a little water turbine) into a stream that runs down through their site. If it works it will likely only generate around 100-150 watts per day, but that will be for 24 hours a day and virtually through the whole of the year.

He is adamant this will be his last self build!

Now he and Lizzie are able to reflect on their journey, they are able to say that although lots of things went wrong, they managed to get them corrected. Although they did have the benefit of experience from their previous self build, there were still new problems that this project threw up that had to be dealt with. Overall, Mike says they are pretty happy with the end result, just not necessarily with how they got there.

Catch up on previous episodes with Mike Coe

HPH220 : How to finish a self build when money is tight

HPH152 : Should you consider the resale potential of your self build

How relevant is mass?

Es Tressider is a guest on the Building Sustainability Podcast, talking about whether adding mass to a building will make it more energy efficient.