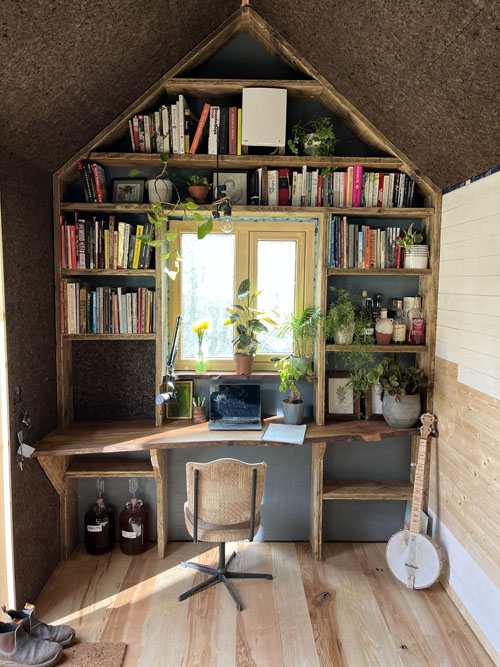 Jeffrey Hart, natural builder and host of the Building Sustainability Podcast, explains what he's learnt designing and crafting his own tiny house.

From an early age Jeffrey Hart had a love for making things. He recalls visiting a friend's house and using a few tools and some scraps of wood to make toy boats. His teachers also encouraged him and would even open up the school on Saturdays so he could continue his project work. After studying industrial design at university he worked as a graphic designer for a while before taking a break and going abroad.

On his travels he came to a small town in Canada where the inhabitants had built themselves homes from straw bales and incorporated re-used materials. It wasn't long before they got him involved plastering and just like that he was building again.

After 5 years on the road, Jeffrey returned to the UK with his mind set on natural building. A first step was enrolling on The Prince's Foundation Building Craft Apprenticeship which offered practical training and served to introduce him to like-minded people.

Finding affordable land is a challenge for any house build

Jeffrey had been searching for land for a house build for some time but ran into the same old problems.

So for many years he lived on a canal boat. This kept his costs down and meant he could stay in London because the cost of rent was pushing him further and further out. It wasn't without hardships though.

“The hard reality of winters when you'd get home and I had a diesel heater as a heat source, you turn that on. And all you could really do was get straight into bed wearing all your clothes, because it will take that long to heat up. And that was just my normal life for a long time.”

Having travelled for a number of years and also lived on a boat where you could only stand upright in certain places, the prospect of a bespoke tiny home was attractive.

Jeffrey had all the skills to build it and relished the opportunity to make this a showcase project.

Land was still an issue, but instead of buying a plot he was now looking to park his tiny home somewhere.

Tiny homes are built on trailers for one important reason: it sidesteps planning regulations. In other words you don't need to own land because you have a movable house… you just need to find somewhere to park it temporarily.

Jeffrey sent emails to every landowner he knew

Although a lot of Jeffrey's emails were ignored his persistence paid off. By probing his existing network Jeffrey was able to source a great opportunity, a win win situation in fact.

The owner of a 700 year old estate in West Somerset proposed a work exchange for his rent, and this is when Jeffrey knew his tiny house project was all systems go.

Think how you want to live in the house

Jeffrey wanted to be fully immersed in the design and build of his home.

After years on the boat he also had certain pain-points to avoid.

Top of that list was a warm house with better cooking facilities, and the ability to stretch out on the floor for exercise, etc.

Not having designed anything since university he went to basics to figure out his layout.

So Jeffrey had the frame and structure all designed out, including the size and placement of the mezzanine.

“What I realised quite early on is that I don't have that architect ability to know what is a comfortable space just by seeing it on a floor plan. I knew that I needed to get the design 80% there. And then I needed to get inside and actually feel the space.”

A tiny house starts with the trailer

Most tiny builders start with a trailer that is 2.5m x 6.5m.

The ‘weight budget' impacted on every decision

Using a spreadsheet Jeffrey was able to tally the overall weight of the building.

This in turn added another layer to the decision making.

For example, when it came to insulation it was not just about looking at the different materials and their properties.

“Choosing woodfibre over wool adds 100 kilograms to my weight. And I've tried to explain this when I was talking to people. I'd phone up people for advice and they'd just laugh and go, it's insulation, it's light. Well it's not when you add it all together. And then you've got a maximum limit of 2.9 tonnes. So 100 kilograms is a 29th of my weight budget.”

Therefore his design means key components, such as the kitchen, come apart and can be removed.

Not all tiny homes are healthy or well built

During Jeffrey's research he discovered that a lot of tiny house projects had issues. For example they might use a stud frame infilled with spray foam (that contains all sorts of nasty chemicals) or there might be considerable thermal bridging around the steel base.

This provided extra motivation to make this build a showcase for natural materials and good design.

Tiny house living should be as green as it gets

Reducing the scale of any project is the biggest step you can take towards eco living.

However, Jeffrey points out that a 600kg steel trailer is a big carbon emitter.

There's also the question of how often these houses get moved… but Jeffrey is hoping to stay put for a while at least.

Jeffrey was keen to apply everything he had learnt in his career, making this a highly efficient building. Thus he focused on creating a high performance building envelope and including triple glazed windows and a mechanical ventilation system with heat recovery (MVHR). This is certainly not common in the tiny house world.

“I do think it is quite rare to do a full wind tightness, fully taped exterior, a proper, breathable airtightness membrane interior.”

Plant-based materials are used as much as possible

It's a standard timber frame (a box frame that starts above the trailer to avoid cold bridging) with wood fibre bats between the framing. Cork clads the entire exterior.

The flooring is local ash from a saw mill 20 minutes away.

The work surfaces use London Plane timber that had been planked and left unused on the Somerset estate.

Being both client and builder has been one of the biggest challenges of this project. Through choice Jeffrey has done 99% of the work himself. However, he's not used to this and has had to reset his expectations of what can get done in a day, week, month or even year.

Therefore while he's solving problems there's nobody else progressing the build.

“I'm so used to different parts of a build happening at the same time, they all come together and fit into each other. But for me just building, I have to just work on one little thing, move on to the next, and keep going like that.”

The wood stove is a necessary evil… for now

Jeffrey is fully aware that getting heat from combustion is not a great idea both for internal and external air quality. However, an electric heating system that runs off solar was out of his price range.

So he's installed underfloor heating to future-proof his home so that as the cost of solar comes down he can switch across (and it's also available if he ever ends up parking somewhere with an electrical hookup).

In the centre of the house is a round wood timber frame.

Through the Building Sustainability Podcast he's got on to the idea of biophilic design, using natural elements in your building for the health benefits.

“It's excessive and it doesn't particularly hold any real function. It adds some stability to the build. But it's overall just there because I think it's a beautiful thing to live in a space with trees in their most natural form.”

Jeffrey set up the podcast for two reasons. Firstly he felt that there weren't many good podcasts about natural building. He also realised that now that he was running sites he was the one teaching others what to do rather than learning himself. Having a podcast allows him to have thought-provoking conversations.

I think some of the best episodes are when I go on a slight tangent and I'm talking to… a great example, I was talking to some people from an organisation called Full Grown, and they grow chairs. They use coppice and grafting techniques to grow chairs, still on the tree. And then after so many years they cut it down, turn it upside down, and it's a chair.

After making this episode he then discovered there was someone in Germany attempting to grow houses!