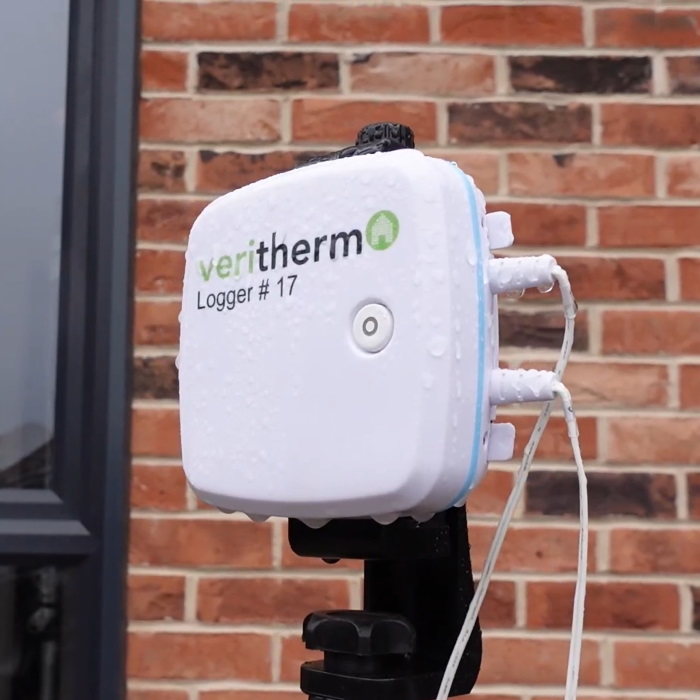 HPH308 : Testing the thermal performance of a house – with Tom Fenton from Veritherm

Tom Fenton from Veritherm explains how to test the thermal performance of a home, what this data can reveal and how it can then be used.

Tom Fenton began his career working in the family's design consultancy that focused on the envelopes and facades of commercial and industrial buildings. From this unique vantage point they were able to see the pitfalls in the design and construction process that impact on the performance of the building fabric, which led them to develop Veritherm's test of thermal performance.

Thermal performance measurement should be affordable and scalable

In general, the construction industry's understanding of thermal performance has been based on theoretical design assumptions and desktop modelling. Academic approaches to measuring thermal performance are lengthy, costly and complex, and only really used at a research level. Veritherm's aim was to develop a solution that would be simple to use while being affordable and quick enough that it could be implemented at scale into a range of projects.

Heat will find the weakest point

Even in properties with high-performing materials and quality specifications like a Passivhaus, if the build quality or detailing isn't quite right, then it will be sub-standard compared to its design predictions. Heat is like water and will always find the weakest point, which is where the energy will be lost.

A phased testing approach can be beneficial

The assumption is generally that testing would be carried out on completion of a new build home, but Tom says that actually, the retrofit market is accounting for around half of their business. Using a phased approach, an initial test will give a baseline measurement of the existing home and how it is performing. That information can be fed back to the design team to consider the most suitable fabric upgrades for the property, rather than relying on design assumptions. Further testing can then be used at other stages as new elements are introduced, to quantify the difference that eg, replacement windows or external wall insulation have made. A final test can determine whether the project goals have been achieved.

A phased approach can also be useful on a new build, with measurements being taken before linings are installed. Together with further diagnostics, this can help to identify the possibility of any errors in the external envelope and allow them to be rectified before being sealed up.

There are three phases to a Veritherm test

The Veritherm test is carried out overnight and is broken down into three stages.

The first step is to retrieve relevant design information for the property, such as its thermal specification and basic dimensional information, which is entered onto the Veritherm dashboard.

Also in this preparation stage, the equipment is deployed in the property which includes temperature sensors in each of the habitable rooms, along with fans and heaters.

During the measurement stage, the Veritherm platform activates the equipment remotely and a controlled and measured heat load is applied to the property, using the fans to ensure temperatures are rising uniformly throughout. It is heated for the first half of the night before then being left to cool passively for the remainder of the time. All of the heat load and temperature data is sent throughout the night to the cloud-based software platform, which uses its integrated algorithms to generate the results.

On completion of the test the following morning the results are instantly available in a full report. This quantifies the rate of energy loss from a building per degree of temperature difference, expressed in units of watts per kelvin. The report also breaks down the data from the individual temperature loggers to give a better understanding of what is happening, and where, in the building.

Veritherm's test quantifies the rate of heat transfer, giving the average U-value for the building as a whole. However, if the test flags up any areas of concern, further diagnostics such as thermal imaging could be carried out to pinpoint anomalies.

The performance gap can be quantified

The Veritherm report compares the ‘measured' data from the test, with the ‘designed' data that was entered into the system in the preparation stage. This gives you a quantification of what that difference is between the designed and as-built performance, ie the performance gap. That information can for example be fed back to the architect to help them improve their design processes. If there's a 400% gap in performance it might mean that the self-builder needs to look at considerably improving their envelope, but if it's only 5% then that's not going to make a significant difference on their fuel bills post-completion.

The data that is produced can also be fed back into energy modelling software to communicate to clients what the longer-term impact will be on emissions and heating demand. This is particularly useful when it comes to designing heating systems to be correctly sized for the property. A new build property that doesn't perform to its designed intent, means that the heating system may not be suitable or efficient. And conversely, many existing buildings have heating systems that are oversized in order to compensate for the unknown, which means there are many capital and operational savings to be had by getting it right and installing the correct system based on the particular property's requirements.

Also in the Veritherm report is a thermal efficiency rating, which is where the rate of energy loss is divided by the usable floor area. Using this traffic light style rating means you can compare for example a 5 bedroom house with a 1 bedroom bungalow, and identify where your property sits on that scale.

With the experience of carrying out these tests comes the knowledge that there is nearly always a difference between the designed and measured values. In general, new builds will tend to underperform against their designs. Existing buildings that use EPCs or reduced data standard assessment procedure (rdSAP) will pluck thermal values from standardised tables based on the building's construction type and year of construction, to come up with basic thermal specifications for that property. Once measured, these properties will often outperform what was expected of them and the client can actually have a cost-saving on their planned improvement works. With upgrades being rolled out to millions of homes across the UK, Tom says that there is serious value and savings to be had by using a measured approach to retrofit.

The goal is to have thermal performance testing in legislation

Even testing identical properties on a development can throw up variable results and identify pitfalls in the construction process, in much the same way as when air tests were first introduced, showing why it's so important for testing to be carried out.

Tom is keen therefore for thermal performance testing to be included in Part L of the Building Regulations, and with the introduction of the Future Homes Standard which has a requirement for photographic evidence of insulation, he suggests that using a measured approach is actually of far greater value and a better way forward.

Download a transcript of the interview with Tom Fenton.

Ben Adam-Smith is taking part in a new series for Passive House Accelerator which aims to share lessons and best practice from low energy projects across the UK and Ireland. Hugh Whiriskey of Partel has devised the hour long format and is hosting alongside Ben and Mike Jacob of KISS House. The Building Performance Interactive is held monthly and everyone is welcome.