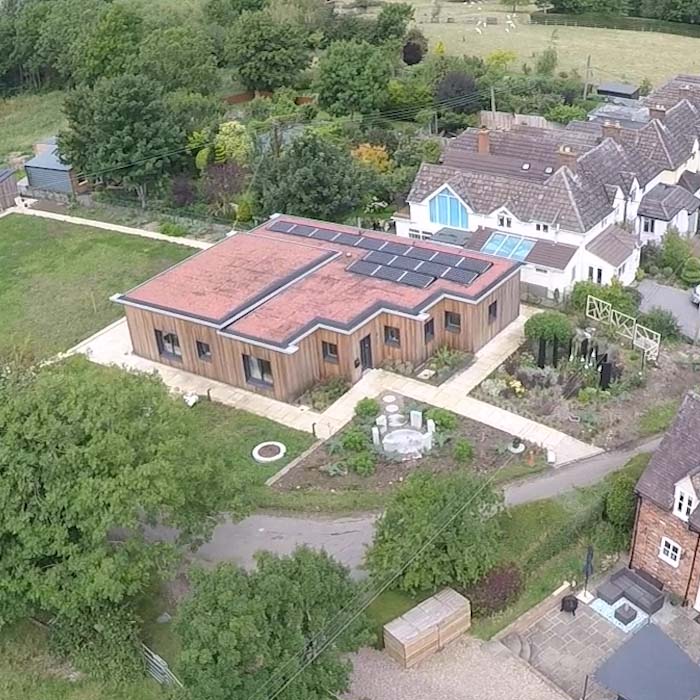 HPH305 : Building a Passivhaus with cross-laminated timber – with Mick Woolley

Mick Woolley explains how the use of timber was a key element of his award-winning Passivhaus bungalow.

For the last two years, Mick Woolley has been living in his Larch Corner Passivhaus which was the Small Projects winner in the 2021 UK Passivhaus Awards.

His self build journey began following the loss of his wife. He had long held an interest in self building and took the attitude “what could possibly go wrong!”

He broadened his search area

Initially beginning his search in the south east of England to be closer to his two sons in Surrey, Mick found a lovely plot, surrounded by a vineyard, and just 30 miles away from them. But despite the proximity, it had taken an hour and a half to get there and was £450,000 before he’d even knocked the existing bungalow down. It was at that point he decided to abandon his search in the south east and opened up to looking at sites as far afield as North Wales and Cornwall.

They made changes to the planning designs

Mick saw a plot on RightMove, that seemed to be in a pleasant village location at the northern tip of the Cotswolds. Close to a National Trust garden and Stratford upon Avon, he felt he would be able to find enough to do in the area and was surprised when he managed to purchase it for around the guide price at auction. It came with planning permission for a single storey Passivhaus with a design that he admits probably didn’t appeal to everyone, and is why he thinks there wasn’t more competition in the bidding.

Although not put off by the design, he was sceptical of its Passivhaus credentials and enlisted Mark Siddall of LEAP to re-work the plans. He did however want to keep it a bungalow to make it accessible for a family member who uses a wheelchair, but also because it future-proofed it for him too.

The original design had a lot of corners so they removed some of these and also had to raise the roof to ensure there was adequate head height for insulation. They swapped the entrance hall and study around to ensure a better flow into the house, and took out the many corner windows from the plans. Mark instead designed an arrangement of windows that came in 2 sizes: smaller ones for the bathrooms and bedrooms, and larger windows with seating elsewhere.

Timber was an important element of the design

Mick wanted to build using Cross-Laminated Timber (CLT), as much for the visual impact it provided inside as for its structural qualities. The bungalow uses 17 sections of spruce timber, which have 6 layers, are edge-glued, and don’t require an airtight membrane around the outside.

The roof came with a cassette of insulation in it so the structure went up in two days, and had an airtight wrap over the top by the end of the third day. The walls are made of an I-frame structure with blown-in wood fibre, giving a thickness of around 600mm and a U-value of 0.1.

The exterior of the bungalow has larch cladding.

The foundations were pre-cut to size

The building has a Jackon XPS foundation which was pre-cut to the required size and slotted together, with an XPS upstand that locked into the perimeter. This created its own formwork for the concrete pour.

The flat roof has a camber of around 5 degrees for shedding water. On top of the insulation is a cold roof section of ply and bitumen that provides the finishing structure on which to put the green roof. Mick says he checks up there from time to time just to check that seedlings for trees and other unwanted plants haven’t blown in and taken root!

He was keen to be hands-on

With Mick being on-site throughout the build process he was keen to get involved in any way he could, so one task that he took on was the airtightness taping. His top tip for getting it into the corners is to ideally bend the tape in two in order to push it in and get good contact right the way through the junction.

The straight lines of the 17 sections of CLT only took an hour to do, but all the other joints around the doors and windows took a lot longer!

Mick employed Alan Clarke as his M&E engineer and he carefully designed the ventilation system so it could go through cupboards and be kept out of the way, but still accessible if needed. The full design with all of the MVHR kit was supplied as a single delivery, and Mick took on the installation of the pipework himself. Not having any experience of doing something like that, he did find it took him a very long time to put together!

There is around 140 square metres of floating floor, which was designed to be laid to flow through without any junction strips at doors. His builder Andy took time to work out the geometry to ensure that boards were centred and wouldn’t end up with slivers at the edges, which Mick was then able to lay.

Although Mick was adamant that he wanted to use CLT, he now realises that he could have been more efficient with materials and created the timber finish that he was looking for by using large sections of three-ply timber.

If he were to do the build again, he would probably opt for a two-storey building, though still keeping a downstairs bedroom. He says that the UK housing stock is generally fairly deficient in terms of providing for the elderly and those with mobility problems, so designing at least one bedroom downstairs is really important.

Mick says that going for a two-storey design would improve the form factor and use a lot less insulation. It is also more efficient in having less foundations and roof.

Lack of storage space is often a real problem in typical new build homes, but Mick is delighted at the amount of space they designed into his home, including a large storage wall. He also has a double garaged sized shed, although this is currently housing lots of off-cuts of CLT and three-ply materials that are waiting to find a home!

He emphasises why it’s always a good idea to build into the loft as that’s also potential space that can be used for storage.