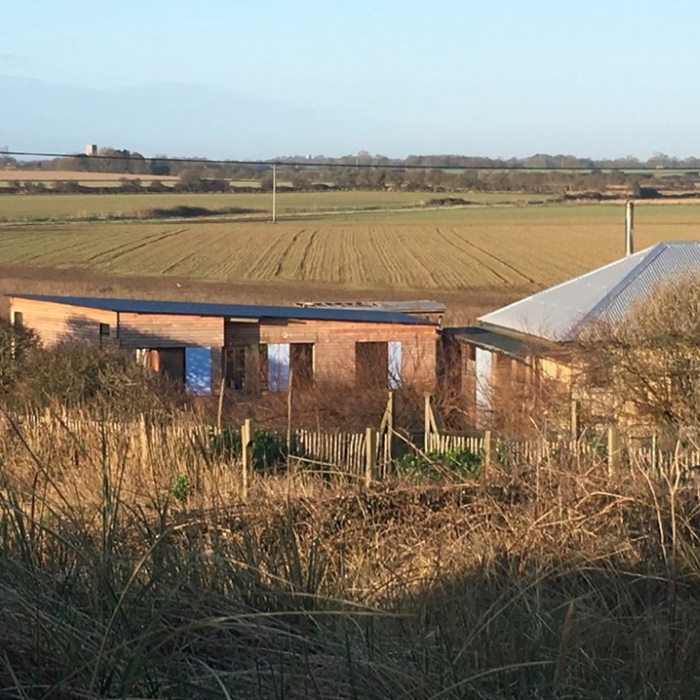 HPH290 : Being resourceful to bring down the cost of a build – with Colin Rice

Self-building an annexe in an area of coastal erosion meant a low-cost but high-performance build was a priority for architect Colin Rice.

Colin is a partner at Cullinan Studio, but one of his first jobs after graduating in 1980 was working with Lyall Addleson. Lyall was well-known for his “Handbook of Building Failures”, and Colin worked with him on his investigations into building defects, and subsequent book “Performance of Materials and Buildings.” The time spent having Lyall as a mentor has shaped how Colin has approached architecture throughout the rest of his career.

Colin has spent three years applying principles he learned during that time to his own self-built annexe at his Green Tiles coastal home.

These are principles that came out of Colin's work with Lyall and which he has always kept in the back of his mind since.

First is the constraint which he calls high to low. This applies whether you're thinking about rainfall or structure and the force of gravity from high to low, but also to things like air pressure and thermal gradients that affect the building envelope.

Separate lives is his second constraint. He says that lots of buildings suffer defects from ignoring the fact a building is a process, and understanding how the different thermal and moisture properties of the materials will work together or against each other over time.

The third principle is the objective of continuity, and particularly the continuity of performance. To use the example of a Passivhaus where there is a greater extreme between inside and out, there has to be continuity of all kinds of things, including the air barrier.

“You’re trying to manage a much greater differential between high and low and you have to do it by thinking very carefully about continuity in the face of the challenge of separate lives.”

The objective that you're trying to do is to hold that in balance, which is the fourth principle.

And finally, creative pessimism is the fifth principle. It could also be thought of as ‘whatever can go wrong at some point will'. By thinking ahead to what could go wrong, Colin says you can come up with smart solutions more creatively.

Colin's home is in an area affected by coastal erosion

Colin's Green Tiles home is backed by sand dunes along the coastline of Norfolk. It is an area where the cliffs are being eroded at a phenomenal rate, which is only expected to worsen further with the predicted changes to sea levels caused by climate change and global warming.

Being somewhat unwise to therefore invest huge amounts of money in the project, applying the five principles to his project also helped with keeping the costs down.

The existing house on the site is a timber frame building of around 6m x 8m, which they have owned since 1998. There was also a 6-berth caravan adjacent to the building which they used as a playroom and then a workshop, before it went into a state of disrepair.

With the existing house being very cold during the winter months, they managed to get planning permission for a self-contained annexe in which they could stay comfortably during the colder periods and also use as overflow space for accommodating guests.

Think of planning as being part of the work

With Colin doing all the work himself, he would use alternate weekends for planning and carpentry at home, and then being on site. While he stresses the importance of careful planning it shouldn't be at the expense of allowing yourself to make changes and improvements.

As the caravan was in too bad a state of repair to use as a workshop, Colin purchased a shipping container as a replacement. He dismantled the caravan and salvaged components where he could, and used the container for storage.

A flood strategy was needed for planning consent

Being situated in a low-lying area at the bottom of a hill, which can have standing water for several months, they were unable to use traditional foundations. Instead, they have used damped down crushed aggregate with railway sleepers on top. The timber frame, which Colin simplified by planning around standard timber sizes, is strutted off the sleepers to allow any floodwater to flow underneath.

Originally Colin had a budget of just £12,000 for his build, but that was before he made the decision to prioritise performance and apply for building regulations approval.

Taking that decision meant an increase in costs of glazing and insulation so his final spend was just under £25,000, which works out at slightly less than £850 per square metre, including VAT and all the internal fitting out.

Colin built the annexe himself at weekends

He spent £2,000 on the double glazed units, which he designed on a “drip dry” principle where the sheet of glass overhangs the wall below, and is overhung by the wall above.

Rather than using off-the-shelf I-studs, which would have weighed 90kg and cost £90 each, Colin made his own C-studs weigh 60kg and costing £60 each. He says they wouldn't be strong enough for a multi-storey building, but for his single-storey dwelling they are perfectly adequate, thermally efficient and light enough to handle more easily when doing the construction yourself.

The roof and walls are insulated by filling the cavity with Warmcel cellulose insulation. The roof joist insulation is held in place with plasterboard and a thin layer of OSB on the underside.

The cold roof has a deck which carries the waterproof membrane. It is designed to be cold because it has a ventilation space underneath it. It relies on air movement through the cavity to clear moisture and things that can cause decay of the timber.

Being thrifty can be fun!

Colin has tried to reuse as many materials as possible in the construction and fit-out of the annexe, even down to the microwave glass plate fixed into a hole in the wall to make a window into the bathroom!

He never throws things away as they might be useful someday, and says he is also an opportunist. He has utilised off-cuts of wood from Cullinan's previous office and among other things has taken apart an old bench sander to use the cogged rubber belt drive on a drop-down window in the annexe.

Ask the question “If I take this apart, will I be able to use it again?”

Colin's tips for tackling a high performance project on a small budget are:

Download a transcript of the interview with Colin Rice.