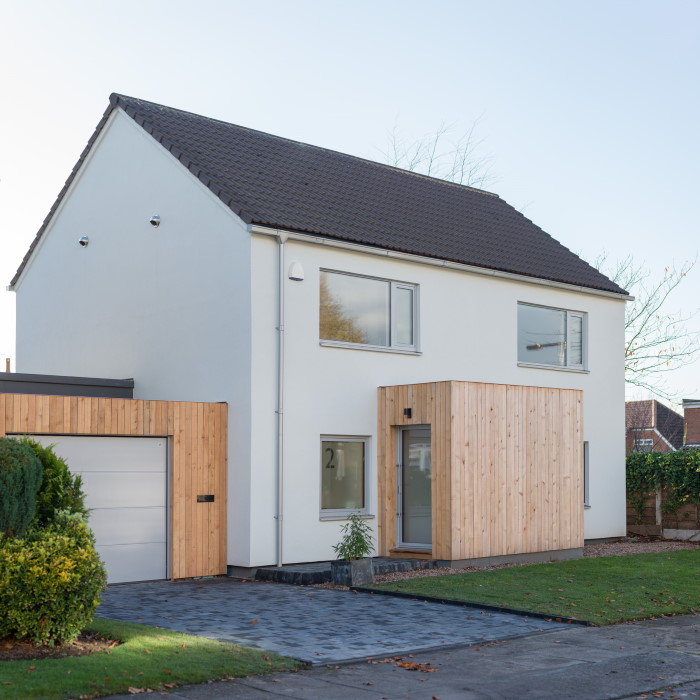 HPH288 : Renovating a 1960s house for comfort and efficiency – with Russel Hayden

Architect Russel Hayden explains how he sought to renovate a derelict 1960s house to EnerPHit standards.

Russel is an architect who, up until four years ago, had spent his whole working life in London. Prompted by a desire to leave London and move closer to family, he and his wife bought a derelict house in Stockport with the intention of it being a project to renovate, before selling it on and moving out of suburbia.

They bought the house through a sealed bid system

At the time, Russel and his family were renting out their house in London and lodging with his in-laws in Stockport when the house opposite came on the market. It had been left in a state of abandonment for around ten years after the owner had died and heirs were being sought.

The house went to sealed bids, and they won it with a bid of 5-10% over the asking price.

At around the same time they left London, they received an inheritance which enabled them to buy the house in Stockport, with enough left to cover the renovation works. Despite a few little extravagances, they mostly kept things simple, and having the budget set gave them a clear direction and target. They did end up spending a little more than they expected to, but felt they got good value.

Upon completion, they had the house valued at significantly more than they had expected. And despite thinking this project would be a stepping stone to something else, they love the house and the area, and have no intentions of moving.

Time pressures meant there was no fixed price with the builder

As they hadn't finished all the drawings, they recruited a local builder to get the house stripped back while they were still living in London. Once they moved, Russel was able to take on the project management role, finish the drawings and oversee the procurement of materials.

Having that experience and understanding now, he does acknowledge a new found respect for builders for the work they put into getting the materials, finding the right price and coordinating their delivery.

The builder embraced the learning involved

The builder had been recommended to them, and although he had never done a project like this before, he had a good attitude and a genuine interest in learning about Passivhaus. That's not to say there weren't also times where he found it frustrating not being able to carry on with his work in the usual way.

Russel paid him and his team of two helpers a daily rate, which isn't something he would necessarily recommend a self-builder do, but he was living opposite with his in-laws and could be on-site every day to keep a close eye on things.

Russel had done the Certified Passivhaus Designer course before leaving London, so understood the principles involved, but knew that he didn't have the experience to tackle it on his own.

They engaged Enhabit to help with the Passivhaus consultancy, who set out four options of how far they could take it: getting it to Building Regulations standard, to AECB Silver, to EnerPHit, and to Passivhaus standard.

With Russel effectively wanting to use it as his business card for his new venture in the north, they felt it was important to do something that was certifiable and within a reasonable cost. Settling on EnerPHit basically then set their brief.

“On reflection, it was a very helpful device actually because it then made everything very clear about what we had to do. I think that’s one of the beauties of Passivhaus. Although there are infinite ways of achieving it, you do have a very real target.”

The building was wrapped externally with insulation

The house needed a new roof, so making the decision to go with that and wrapping the brickwork in external wall insulation, gave them a clear steer of how they were going to develop the project.

They sought planning permission because the 280mm insulation would increase the house footprint by around half a meter, and with an extra foot of height on the roof ridge line.

One of the biggest challenges was with the concrete slab floor, and the problem of the cold bridge at the perimeter. Without wanting to spend huge amounts of money on it, they decided to accept there would be a cold bridge there, but put insulation on the retained slab. They mitigated that by dropping 150mm of insulation externally down to the foundation level.

They kept structural changes to a minimum

By deciding not to move windows and doors around unless absolutely necessary they were able to keep the costs down. They did need to remove a chimney breast though, as it wouldn't have worked with Passivhaus.

Adding the floor insulation meant the floor was raised to the level of the first step on their stairs. On the first floor they removed the ceiling plasterboard to expose the joists and give a sense of a bit more height.

One of the big changes they made was reducing the size of the garage and extending onto the back of it to make a space that is used as a garden room, office, and exercise studio. It has a timber frame construction with a straightforward flat roof, making it a cost-effective addition to the project.

Russel's wife Anna is also an architect and she spent a lot of time researching materials for the interior finishes, and finding fittings which weren't necessarily particularly expensive.

They chose a parquet flooring for the ground floor and a lighter oak parquet for the upstairs, which together with the full height doors in the rebuilt partitions, gives continuity between the spaces.

They fell just short of their airtightness target

One of the biggest challenges on the project was getting the connection to the existing house right, and particularly minimising the thermal bridges where the garage and extension connect.

Russel thinks the workmanship around that connection was responsible for them just failing to achieve their airtightness target, with a result of just over 1.1 (where 1.0 is required for EnerPHit). By the time they had that final airtest they were past the point of being able to go back and remedy where the problem may have been. This did mean that frustratingly they weren't able to get the certification they were hoping for.

The hands-on experience has been invaluable professionally

Among the things Russel learnt from this project, was about having the right and patient approach with people. This was particularly the case with having employed a builder on a daily rate rather than a contract.

He also found that being so involved on site and doing the taping himself, meant that he was gaining a much better understanding of things that worked and things that didn't, which invariably will influence the way he goes back and details buildings.

“I think what’s been brilliant about the Passivhaus Designer Course is that I’ve realised that for the last thirty-odd years I’ve been detailing and designing buildings not terribly well without a proper understanding of moisture and how buildings work, thermal bridges and things like that.”

He is now working on a Passivhaus self build

They have since bought a 1960s concrete panel bungalow in the Lake District which was won through another sealed bidding process. With the bungalow quality not living up to that of the view, it became quickly apparent that their best option would be to demolish and replace it with a new building. It is currently at the planning stage and they are looking to make it a timber frame construction built to Passivhaus, or ideally Passivhaus Plus, standards. Being in a World Heritage Site they are keeping their fingers crossed!

For anyone thinking of carrying out their own retrofit, Russel says the budget will be key but it can be very difficult to know how far you can go within that. The balance between getting to the level of comfort required without spending a huge amount of money can be a challenge.

It is easier if a particular standard is the target, but without that you are left with a number of options.

It is best therefore to understand the difference between what you want to spend and what you need to spend. Spend it carefully and you'll get what you pay for. By keeping it simple it will be easier to design and build, and you'll get a lot more for your money.

Download a transcript of the interview with Russel Hayden.