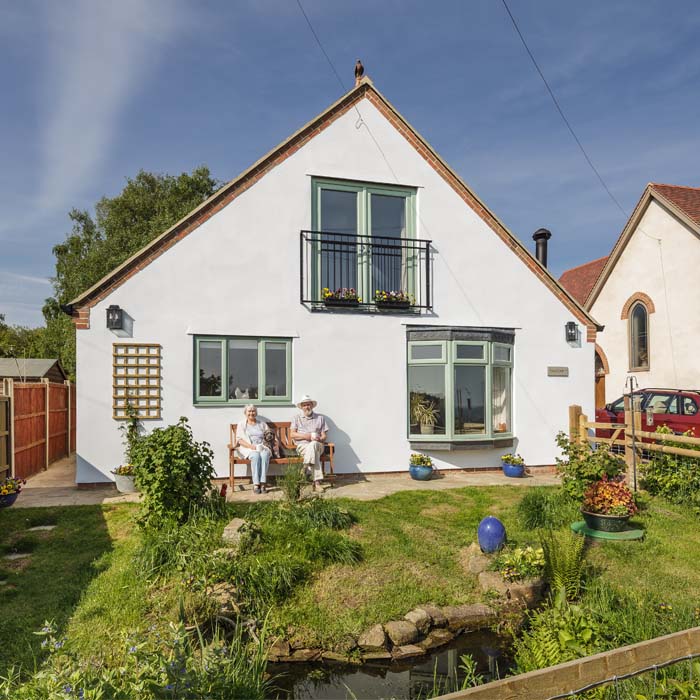 HPH275 : How to reduce the cost per square metre on a self build – with David Snell

With 14 projects under his belt, author and serial self builder David Snell explains how you can stop costs from running away from you.

Some people see self build as a once in a lifetime opportunity to have the house of their dreams, but David Snell has had a different approach. Having never spent more than three years in one place, he finds the desire to move on coming from a mixture of boredom and opportunity. Currently approaching three years in his latest house (but he's starting to get itchy feet so it might not necessarily be his last!), David is able to draw on experience from his previous 14 projects to offer advice on how to stick to a budget.

There is a profit incentive

As well as the joy of creating a house of your requirements in the place of your choosing, a big incentive of self building for David has been getting it for a price that also gives you a healthy profit. His current house, including the price of land and construction, cost £237,000. By the time he moved in it was worth upwards of £400,000.

Each time he has moved it has been to suit their situation at that time, but always in mind was gradually building up their equity to get to their current point where they are mortgage free in this house, while also owning other debt-free properties.

Have a benchmark to work from

Almost as soon as he has some plans David will send them out to costing organisations such as Online Estimating Limited to make sure that he is on the right lines. He will always have a benchmark price in mind for what he can afford and thinks is worthwhile putting on that plot in order to make positive equity. If the costs come back significantly higher than that, he knows he would have to go back to the drawing board with the design.

Shop around to get the best prices

David says that many self builders come from within the construction industry and are familiar with what sort of prices they should be paying for labour and materials, so he puts himself in their shoes.

He doesn't believe in settling for the figures that the estimators come back with. He sees them as targets to beat.

There will always be extras

Whether they are from unanticipated groundworks, or “elective extras” on finishes, there will always be extras in any building project, and it is for this reason that a contingency fund is necessary.

David does warn against going overboard on spending on finishes where it's possible to spend an awful lot of money without any particular gain. He says that it is easy to become obsessed with wanting specific items. Particularly if you're looking at the house as an investment, just remember that anyone coming to look round to buy the house isn't going to be looking at the brand name of the taps or toilet!

“It’s something that people can get obsessive about at the build point and they can be sucked into buying and paying twelve-hundred pounds or two-thousand pounds for a bath where they could get something that would look absolutely identical and work absolutely the same way for a tenth of that.”

The house cost £861 per square metre

That price includes carpets and curtains, so David has had to be clever with his purchasing. One tactic was to buy kitchen floor tiles from a company dealing with end of line goods and seconds. Even though he bought a lot more tiles than needed (in case of breakages etc), he paid £20 per square metre for a tile that he says you could be charged £60 per square metre for in a different shop.

David also picked up a bargain with his oak internal doors. He happened to be passing Howdens when they had an end-of-line sale, and he got them for half price.

He has been meticulous about logging expenditure in his notebook

From his starting point of knowing the projected cost, David was able to keep a running total of everything spent and how much money was left. By logging the net cost and the VAT, it was also useful in keeping track of how much VAT they would be able to claim back at the end.

Keeping these records up to date and cross-checking them against the original costings gives visibility of any overspends, and therefore whether savings will need to be made elsewhere towards the end of the project on the high value finishes.

“I’m not stingy but I’m frugal. I don’t spend more than I’ve got or have originally budgeted for.”

With any luck there will be savings made along the way which will allow more money to be spent on the kitchen and bathrooms at the end.

Incorporate landscaping into the budget

If it's left until the end, often the landscaping can be the thing that falls by the wayside as there's not enough money left by that point. Instead, David incorporated it into the costings as he went along and the landscaping was happening while the house was being built.

There was plenty of landscaping to do on this project, with about 400 tonnes of material being dug out. It was initially put in a heap at the back and then brought back when it was needed during the build. They ended up creating the levels as they went and the landscaping became a generic thing that happened as they built the property.

Don't believe that you're on an unstoppable train

“You are on a train that you can stop. At any time if it’s running ahead and away from you money wise, you have to have the ability and the power to say stop. And you do have that ability and power because it’s your chequebook that’s paying for this. If it’s not going right and you want to stop and think, do so.”

If you end up having quotes that are much higher than anticipated, be prepared to take the time to wait until you can beat them. By believing you're on this unstoppable train you can get carried away paying the larger sums to keep it moving and soon being way over budget.

He is still learning!

A lesson learned from this project is to never mix MDF and timber in things like door linings. David has got MDF architraves with timber door linings, and says that they behave and shrink differently and separate.

Inflation hasn't been a factor across his projects

David has worked out the cost per square metre of his last five projects:

Looking at those figures he hasn't really seen any radical inflation in costs. What he does believe is that people can go over the top with spending. They get engrossed with all the new innovations available that can be thrown into a self build, and he thinks this is what escalates costs way beyond what you need to do and spend.

This could be his thirty year house

Now aged 75, David has built this house with their long-term future in mind. And if he doesn't get the bug to take on one further project, then this house should cater for their needs going forward. All the door openings are the right width for wheelchairs, the taps can be used with impaired hand movement, and in addition to a downstairs lounge, there is a lounge upstairs that could be converted if needed.

Listen to our previous podcasts with David about what to look for in a plot of land and hiring contractors and subcontractors.