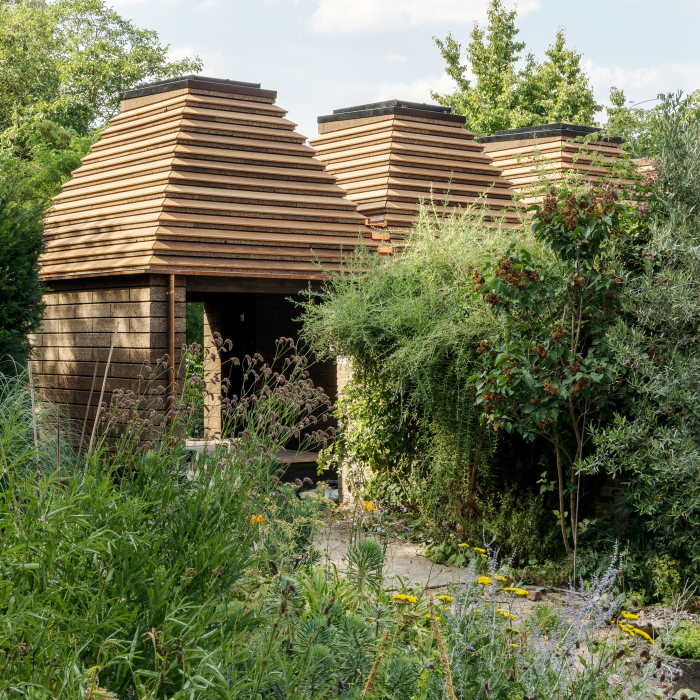 Award-winning Cork House was the world's first to use a solid cork construction system. Matthew Barnett Howland explains the concept and how he managed to build it himself.

Matthew Barnett Howland is Director of Research and Development at CSK Architects in Eton. He has always had an interest in making things, as well as designing them, and in 2013 he teamed with academic and industry partners to research and develop the solid cork construction kit, of which the Cork House is the first pilot.

The process of designing the Cork House wasn't to try and build a house made from cork. Instead it developed from a general dissatisfaction about how modern houses are constructed in the UK. They have a complexity at almost every stage of the building's life cycle:

“From the resource stage and landscaping packs; through to even the design stage, specifying different materials with different properties and so on; through to on-site sequencing of trades, interfacing between trades; through to the performance gap that you almost always get in houses where they always perform less well than they’re predicted; right through, particularly most importantly probably, to the end of life scenario where you have a destructive demolition.”

So one of the project's main motivations was to think about the material ecology and then develop the architecture from that, rather than the reverse.

A holistic design approach was used

The design of a house is typically the result of a response to site characteristics, a client brief, planner's input, engineer involvement, a construction that will pass building regulations, followed by a pricing and value engineering process. Inevitably there tends to be a granular, rather than holistic approach to a project. What the Cork House allowed Matthew to do was be the client initiator, researcher, designer and builder, allowing him a single-minded and holistic way to approach it.

The Cork House was specifically sited at the rear of their existing house, at a bottleneck between two gardens that creates a threshold space and articulates the junction between the two.

The brief was driven by a desire to find out whether they could make a building envelope, walls and roof out of a single bio-renewable material that would fulfil all the functions and performance requirements of the modern building envelope.

He contacted Innovate UK and EPSRC (Engineering and Physical Sciences Research Council) and together they created a research team of academic and industry partners, who in the space of two and a half years, tested, prototyped and developed the proof of concept for the solid cork building envelope.

Cork possesses a range of ideal qualities and uses

The team worked with the Portugese company Amorim, who are the world's biggest manufacturer and supplier of cork products.

Cork comes from the bark of the cork oak tree. The majority of a harvest is used as bottle stoppers, while another part of the industry uses granulated cork mixed with a polyurethane glue to make a range of products.

The waste from these industries ends up being made into expanded cork. The cork waste is granulated and heated to around 360°C with dry steam passing through it. The granules expand and release a natural resin, suberin, which melts and as it cools it re-bonds the expanded granules back together again. The result is a fully bio-renewable and bio-degradable product.

Cork has a number of qualities which made it ideal for the range of uses required for this project: the structure, being watertight, airtight, insulating, internal and external finishes.

The life-cycle of the house was an important consideration

The house has been designed so that if a time arrives when it should come to the end of its usable life, the materials can be easily recovered for reuse or recycling.

There is no mortar or glue between the cork blocks, and the connections between the timber elements are all bolted and screwed, meaning that everything is accessible and demountable.

Anything that can't be reused or recycled, being pure cork, can be granulated and put back into the soil to biodegrade and be a soil improver.

Research was carried out to test performance

Prototypes were made and tested in-situ for the cork's airtightness and weather performance, which aided the research and knowledge for the construction process.

They also undertook a range of lab tests. These tested for performance in wind-driven rain and fire protection, as well as a number of structural capabilities.

The architecture, spaces and forms are as a result of the cork properties

For example, the pyramidal roof shapes came about from a series of decisions about using cork.

“It works best in compression, we don’t want to use glue and mortar for disassembly reasons, and the wall works with the tongue and groove system so a logical consequence of that for the roof is rather than introducing a new set of materials and systems that would introduce complexity, you offset this wall system using these solid blocks of cork to take the load through them. So, the form is a result of those considerations and those factors.”

The motivation for the removable steel screw pile foundations was the ability to return to a pristine site if the building was ever dismantled and removed.

On top of the foundations, a 300x100mm timber beam was bolted all the way around the perimeter. CLT (Cross Laminated Timber) floor plates were dropped onto the ring beam giving a solid timber deck with cork insulation underneath.

From there, prefabricated cork blocks (1268 in total!) were tapped down and held with friction to build the walls. This process was very quick and easy until it came to where they interfaced with the timber ring beam and valley beams.

The vertical load in the house is taken down to the timber slab via the cork. The lateral and sheer loads to stop the house folding over in the wind are taken through a sort of timber ladder beam at eaves level. Matthew describes trying to ratchet strap and clamp the prefabricated timber elements with the prefabricated cork elements as being particularly challenging.

There is a limited but consistent palette of materials throughout

They have used spruce tri-ply and TILLY board for the built-in joinery. The bed, sofa and dining table are made from reclaimed spruce CLT, the kitchen stools are made from storm-felled oak, and the floorboards are oak unplaned timber screwed down into the spruce CLT floor.

Variations to this are with the solid brass worktops, a bespoke folded solid brass bath and basin, and copper for the gutters and downpipes. All are unlacquered, pure material that can be recycled back into the manufacturing chain.

Solutions had to be found for the plumbing and electrical work

With solid walls that don't have cavities or voids to hide services behind, everything is exposed and had to be thought through carefully.

The bathroom is a self-contained independent solid CLT box structure which acts as a hub for all the services, and the CLT floor panels were pre-routed to accommodate pipe runs under the floorboards. The built-in furniture and structural wardrobes were also pre-routed for service routes.

Matthew had a dual motivation for doing the project

Firstly, it was to build a house which they could use themselves, and secondly it was to use their skills in design and research to respond to some of the pressing issues of our time.

He started designing the house with his father, who was also an architect. When his father passed away he felt that it was a good use of the money that his father left him to work full-time on it to complete the project. Matthew estimates he worked on the project full-time for around five or six years.

He is keen to continue the research and learning

With work completed on the house there have been areas that they've had to return to. One was to add a foam tape on the internal face of the block joints to improve airtightness, which Matthew says would have been nice to achieve without a foam based product. And on the roof they have introduced cedar weatherboarding to help shed the rain, otherwise it wasn't watertight just as a pure cork structure.

Matthew enjoyed the process of research and learning, and the way of going about things in terms of conceiving and developing an idea, putting together a team, getting the funding, lab tests, prototypes, getting it through building control, etc. He would also be keen to do more work around life cycle issues, which they're currently doing on another cork project for a client, but also look at it with other low carbon materials such as timber or stone.