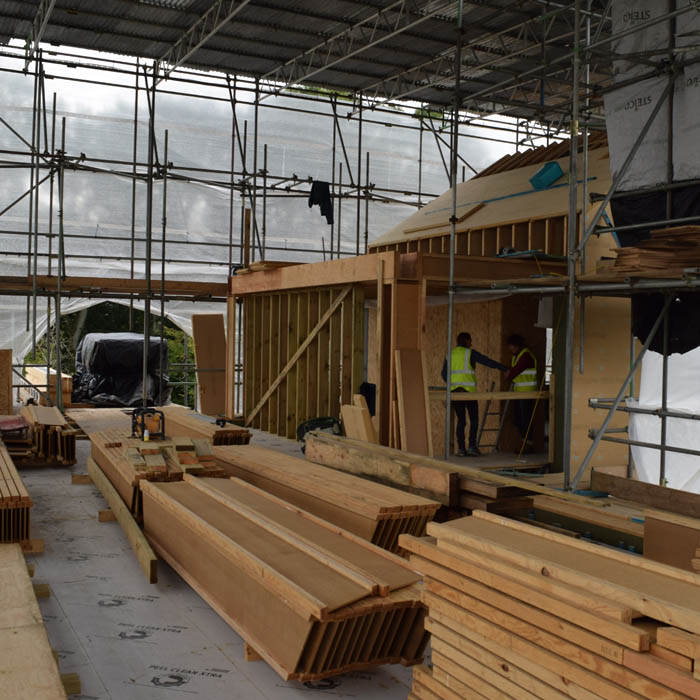 HPH266 : How to invest sweat equity into a project while maintaining quality – with Ajay Boardman and Nigel Bowley

Client Ajay Boardman and her builder/carpenter Nigel Bowley share their experience of working together on her self build project. In addition to project managing Ajay is labouring for Nigel. We look at why this relationship has worked well and consider how much money she is saving.

Ajay is building a 260m² Passivhaus in the South Downs National Park, using the PH15 build system. Having found Nigel Bowley to build the timber frame, it seemed natural that, being a practical person who didn't have a job at the time, Ajay herself would take on the role of project manager and labourer.

Parental support has been invaluable

A big factor in Ajay being able to take on the project has been the support of her parents who live on a farm next to her and the site. Having plenty of experience helping her dad out with manual work on the farm has stood her in good stead for transferring her skills to the building project.

Not only has her dad helped out with the labouring when she has needed a break or to concentrate on the project management side, but he also always has the right tools for the job. In addition, Ajay's mum helping out with childcare has meant that Ajay has been able to put in the extra hours while still having the children close by.

A carpenter by trade since joining a YTS scheme in 1986, Nigel has had a varied career working on projects such as house building, extensions, internal renovations, roofing and some commercial work. He is equally used to working on his own or having a small number of sub-contractors and labourers alongside.

From previous experience of working with labourers, Nigel had his doubts about how successful having Ajay and her dad work with him would be. However, Ajay soon demonstrated that she had a great interest in the building, listened, followed instructions and had good manual coordination and skills.

Working on a weekly payment basis rather than a contract, Nigel had the ability to walk away if he needed to, but after a successful first week levelling the site they both realised they would be able to work together well.

They also found that their different skills complemented each other well. Where Ajay's knowledge of the parts and the process was lacking, her admin and communication skills helped take what was in Nigel's head and translate it into something that she could work from.

Breaking the jobs down makes the whole process less overwhelming

Nigel explains that looking at the entire job and thinking about what needs doing can actually be pretty overwhelming. He tries to keep things more simple by breaking each job down into smaller parts. That way the focus only ever has to be on those few things that are needed over a short time span.

Doing it yourself gives you control over the quality

Having been to see a different PH15 house, Nigel was confident about the timber frame aspect and getting it level on the slab. Moving forward they may get an electrician and possibly a decorator in, but the rest of the work they are keen to do themselves. This includes the MVHR and all the taping and joining because they are so aware of the importance of getting it right for the airtightness.

Ajay and Nigel have found a happy balance in what they each need to control based on their individual skills, without controlling each other. While Nigel is in control of the job, he's also answerable to Ajay's quality control. This method has worked for them and hasn't caused any conflict.

Nigel's tips for anyone else in a similar situation would be around communication: listening to each other and knowing your boundaries on what to say and when.

Quality hasn't been compromised by the cost savings

Taking on the role of labourer and project manager has obviously been a cost saving for Ajay, and by taking jobs like sweeping up and placing orders away from Nigel, it means his time can be spent more productively.

Having a relative novice alongside and working out things like the airtightness has meant that the speed of work has sometimes been slower than on his other jobs. However the quality hasn't been compromised, with architect and co-creator of the PH15 system, Jae Cotterell, crediting the workmanship being of very high quality and better than a lot of professionals.

Nigel believes that sweat equity can work whether it is a PH15, masonry or other build system.

“I don’t think it matters on the style or the type of building. It’s just really if you’re prepared to work, properly work. Because I don’t think a lot of people really work that hard when it comes to physical.”

But doing it themselves has allowed an element of flexibility when it comes to working hours and fitting in around school runs and other responsibilities.

They are not working to a programme

Nigel is used to working to a programme, so not having one on this project has been one of the hardest things for him to adjust to. He is used to setting an ambitious timeline in order to keep the labourers motivated.

“On previous jobs, you can burn your labourers up quite quickly and they become unmotivated and they leave pretty quick. So, you’ve got to really manage their physical abilities, your own physical abilities, and so you kind of have to let the job lead you in that way really. And knowing when that is going to be a physical effort, a mental effort, a slow part of the job.”

It's more about the process than the end result

With a few months left on the project, Ajay is relaxed about how the house will turn out. For her, the greatest satisfaction is the process of making it, though the air quality and comfort that comes with it being a Passivhaus is something she is particularly looking forward to.

If you're new to Passivhaus and want to find out more about it, then check out the National Self Build and Renovation Centre in Swindon which is running a series of workshops in November 2019 and April 2020. There will be explanations of the key principles along with case studies and demonstrations.