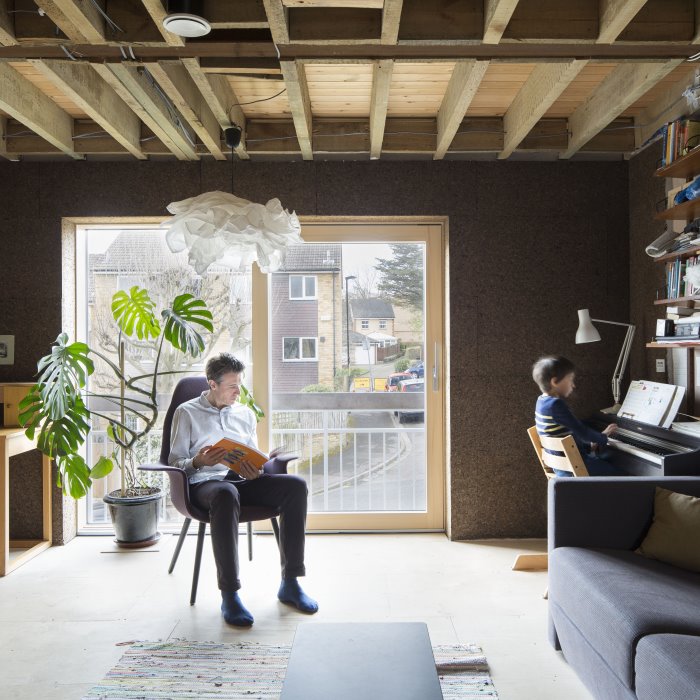 HPH263 :A step-by-step EnerPHit retrofit of a mid-terrace home – with Harry Paticas from Arboreal Architecture

Harry Paticas of Arboreal Architecture explains why care and hard work have been so important to the retrofit of his 1978 mid-terrace townhouse.

Harry has a background in art and maths, which he then followed with a degree in architecture. He says the turning point in his twelve years in practice as Arboreal Architecture was taking the Passivhaus training course and suddenly being able to understand how buildings perform.

Together with his interest in building performance and the natural world, he also has a passion for retrofit, and is currently getting towards the halfway point of a phased retrofit of his own house, a project which was overall winner at the inaugural ASBP Awards 2019.

“When you put passion in, you get something out”

The house was purchased in 2016 with the aim of doing a retrofit project. Although they had intended on finding something a bit cheaper so they would have more money to spend on the works, this house cost rather more than they had budgeted for which is the reason they are not currently as far along as they had hoped.

It is a south facing, slightly staggered mid-terrace property. It is a combination of a solid brick and block front wall that is tile clad, while the back wall is brick both sides with a cavity.

It has been an intensive couple of years working on the house, with every Sunday taken up by long hours of DIY. It has been a massive learning journey which Harry says has also been of benefit professionally.

Not only has the DIY element of the project been hugely rewarding, but it works in parallel with his professional role where he can now speak even more confidently and knowledgeably to clients. This could be about how the MVHR functions, how often you need to change the filters, how the pipes connect etc. Likewise, it aids with speaking to builders and helping them do a better job, which gains more respect from them in turn.

The first phase involved work being carried out before they moved in. They had sold a property and were renting so that they could get any of the dangerous, dusty and cold work out of the way while living in their rental accommodation. This included asbestos removal from ceilings, airtightness works to the ceiling on the top floor, putting in and taping vapour block boards to each other and to the walls, adding insulation to the loft, making the house secure and weathertight and installing three triple glazed windows.

A key part of the strategy was maintaining good quality ventilation before the MVHR unit was even installed. With the existing leaky double glazing they knew it wouldn't be a problem, but when they were replaced with the triple glazing they specified night vents. These allow the handle to be put to 45 degrees off the vertical which gives a 3mm opening in the window at the top. This meant they could maintain decent air quality as an interim measure without the need for installing trickle vents.

By doing lots of monitoring of particulate matter, nitrous oxide, carbon dioxide, temperature and moisture content, they could use the information to decide whether night vents should be open or not.

Harry is currently finishing off bits of airtightness work and interior decorating of phase two before working on the next big phase which will be working out where the living space is going to be. The plans they submitted to the Passivhaus Institute had it on the first floor, but they're now thinking of having it on the ground floor.

According to their EnerPHit retrofit plan, the next phase is to temporarily insulate the garage door. This will instantly reduce heat loss through the whole of the living room floor, the ground floor hallway and a back wall of the garage. In order to do that they will need to block the door and create a new entrance into the garage.

Cork has been used for internal insulation

Harry was always going to use an insulation material that was from renewable sources. He also wanted something that wouldn't off-gas but be neutral in terms of air quality.

His work with Jane Anderson on embodied and sequestered energy in a range of insulation materials has shown that cork actually has lower embodied energy than wood fibre, and is very good on both counts.

It hasn't performed as well as hoped in the heat

While internal temperatures have reached 27 degrees, it hasn't overheated in the Passivhaus terms of over 20 degrees for 10% of the year. With the new windows they are getting 20% less sun through, but with the cork they're not getting much effect from decrement delay. They have a medium thermal mass and the top floor doesn't cool down very quickly because of the blockwork walls and brick party walls.

Currently being made are three bright yellow sails which can be attached to the front of the house and shade 100% of the top two windows and over 50% of the large living room window. They will provide a low carbon, low tech solution to shading and reducing overheating, and which can be packed away in a bag in the loft when not needed for the rest of the year. They will also be able to judge their effectiveness scientifically as they have installed sensors on the inside and outside of various rooms of both theirs, and their neighbour's house for comparison.

It's also about respecting materials that are already in the building

The process they have adopted has been to try not to replace something if it actually works quite well.

“So there’s a little bit more of a lean towards embodied carbon, rather than very demanding interior design aesthetics.”

This has led to what Harry calls some ‘fun moments' and to a little bit of variation, which they're accepting of and saying that's what this is about, rather than trying to put his architectural stamp on everything and making it as perfect as possible.

It has been an education for his son

With Harry's son soon turning eight, he was keen for him to be involved and remember the experience as much as possible, with a deep understanding of what it is they were doing and why.

With only a little encouragement at first, his son has been producing a series of A3 posters with images, annotations and diagrams, about cork, airtightness, a thermographic survey, insulation and mechanical ventilation with heat recovery.

His teacher engaged with the process and has encouraged him to display them in school and do presentations about them to his class.

A direct result of the school presentations is that Harry is starting a charity or community interest company which will be about retrofitting schools. He will be delivering thermal performance workshops to school children and doing research with them where they look at the fabric of their classrooms and the school and coming up with a retrofit masterplan.

There have been particularly pleasing elements

Having never had them before, Harry particularly loves the triple glazed windows, which is an opinion shared by visitors to the house. They are inward opening with a central flying mullion which allows them to open up a whole elevation and achieve very rapid night time cooling.

Another favourite feature is the MVHR unit. They still open windows when they want, but for general air quality which has been backed up with numerical evidence from their monitoring, it has been particularly pleasing.

Harry says that working with and getting to know materials has also been lots of fun, particularly with the cork.

Download a transcript of the interview with Harry Paticas