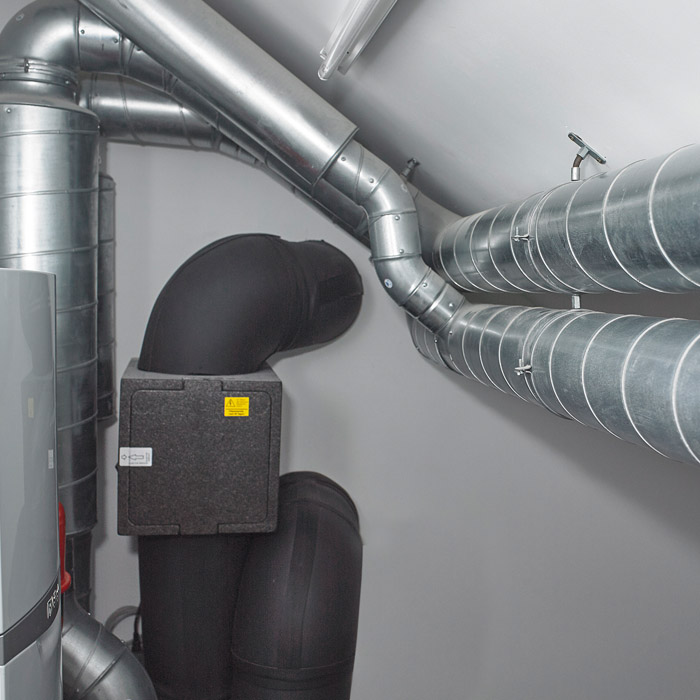 Tom Heywood from Green Building Store explains why we need mechanical ventilation with heat recovery in high performance homes and why it needs to be well designed.

Tom studied architectural technology at university and was disappointed not to have been taught anything there about efficient building. So when it came to doing his dissertation he wanted to do something different, and decided to write it on Passivhaus principles.

Tom is now the MVHR design manager at the Green Building Store.

Natural ventilation tends to be unreliable. The supply levels might depend on how windy it is, with areas of the building in the path of the wind receiving more than elsewhere. There isn't a way of delivering a particular amount according to the requirements of a specific area.

With the increased ability to make buildings more airtight, comes the reduction of natural ventilation through trickle vents and leaky building fabric. At this point mechanical ventilation is required to provide enough fresh air to keep CO2 levels down and prevent dangerous build-ups of volatile organic compounds and other indoor pollutants.

With a properly commissioned MVHR and an airtight envelope, you can deliver the right amount of fresh air to different spaces, ie more for a double bedroom than a single. The MVHR unit will also extract as much heat as it can from the exhaust air which will in turn drive down the heating load.

Tom suggests that, as a rough guide, when you get to less than five air changes per hour, that's when you should start introducing some form of mechanical ventilation, such as Mechanical Extract Ventilation (which is just extracting, not supplying or recovering any heat).

Once you get down to three air changes per hour an MVHR starts to make sense, because then there's not as much cooling going on with natural ventilation coming in.

An MVHR unit has two fans – a supply and an extract, and a heat exchanger. Stale, moist air (such as is produced in bathrooms, kitchens and utility rooms) is extracted and goes back to the heat exchanger, which is where the fans are.

The heat is transferred to the incoming fresh air that is then supplied to the habitable rooms, such as the bedrooms and living areas. The air is also filtered, ensuring a clean, fresh air supply to the rooms.

Concentrate on getting the design right

Rather than someone who provides a schematic of some ducting on a piece of paper, you want someone who is going to design it around the structure to make sure when you get to site that it will work efficiently and that the air supply will actually make it all the way along the ducting route to the required rooms.

Tom says key information to ask from a designer at the design stage is for sound data and pressure loss data. Pressure loss is the resistance that the duct is providing to the airflow. If pressure loss is too high the fans will have to work harder to push the air through. And when the fans are working harder, it will increase energy consumption and the noise will be louder. Likewise, if you never change the filters, the fans will have to work harder to drive the air through.

Tom says it's always good to oversize the unit so that it's not running too hard.

He stresses how important it is to get the system designed early. Even as soon as the architects and engineers are doing their drawings you should be getting your plans submitted to a designer to get their opinion on unit location, duct sizing, where they need to run and what sized joists are needed to accommodate them.

There are branch and radial systems

Tom likes the branch systems (of rigid ducting) because it's easier to get a low pressure loss with careful sizing of ducts.

“A lot of people think that the radial system saves space, but if it’s done properly, instead of having one one-hundred mill. duct to, say, a bedroom, you’d have two ninety mill. ducts. Because those ducts are carrying the same amount of air but they’re smaller, so there needs to be more of them to compensate for that.”

A radial system, also called an octopus system, has a main manifold at the start which is a box with lots of small spigots on it. The semi-rigid plastic radial ducting plugs into that and goes off to the rooms. Each room would have its own branch (or two or three), all the way from the manifold at the start to the air valve in the room. It is a good system for preventing any cross-talk sound travelling from room to room because the sound can't make it all the way along the ducts.

Tom believes radial systems do have their uses, especially in retrofits where the rigid ducts of a branch system would just be too big to get in.

Commissioning a system takes a lot of toing and froing!

Tom explains the method of commissioning a branch system. The unit is told what it is running at, eg 300m³ per hour on fan speed 2. If the supply to a master bedroom was to be 35m³ per hour then they would go into that bedroom and adjust the damper to allow more or less accordingly until it was at the required amount. An anemometer over the air valve measures how much air is coming out.

But as that valve is closed down it will drive the air into another air valve somewhere else. So the next room would need to be checked to see if it has been impacted and needs adjusting. Any changes to one mean going back and checking all the others again, as it's all on one system.

Ideally you want the intake and exhaust ducts on the north elevation. That way they'll be shaded from the sun in the peak summer heat. The system will work more efficiently because you're bringing in cooler, shaded air.

You should also avoid placing them right next to a window or facing onto a neighbour's garden, because they could be blowing quite hard and at audible levels.

Too close to the ground and they could drag up leaves, debris and animal hairs into the intake duct, which will block up the filters more quickly. Ideally they should be 1.5m above ground level.

If incoming smoke from neighbouring properties is a problem, then you can get active carbon filters which filter out the smell and smoke even better than the F7 pollen filters would.

The controls should rarely need using

The idea of the controls is to have them as simple as possible and generally left running on fan speed 2. They may only really need changing if you're going to be away from the house for a long time, in which case you could drop it down to fan speed 1. And if you have a large gathering and are going to be doing lots of cooking, then hit the ‘party button' which increases it to fan speed 3 for 45 minutes, before automatically dropping back down to fan speed 2.

Generally there would be one main controller which would usually be in the kitchen for convenience to boost it if required. Alternatively you could have the main controller somewhere else with just a remote boost switch in the kitchen. Tom doesn't recommend having it in a bathroom as boosting the system while showering early in the morning and late at night could become audible in the bedrooms and disturb the occupants. The fan is designed anyway to remove enough moisture whilst showering without the need to boost.

Only a small amount of maintenance is required

There shouldn't really be too much maintenance required, other than changing filters every three to six months (depending on indoor and outdoor air quality, and whether you have children and pets).

After five years it might be worth unscrewing the air valves in the bathroom and giving them a clean as they could collect dust and towel lint over time.

And depending on the MVHR unit specified, the extract fan may need very careful cleaning, preferably by someone who has done it before.

If the unit is turned off for more than two or three days there could be a risk of mould growth in the ducts. There shouldn't however be any danger of that happening if the system is left on and each branch to each room has air flowing through it.

Download a transcript of the interview with Tom Heywood.