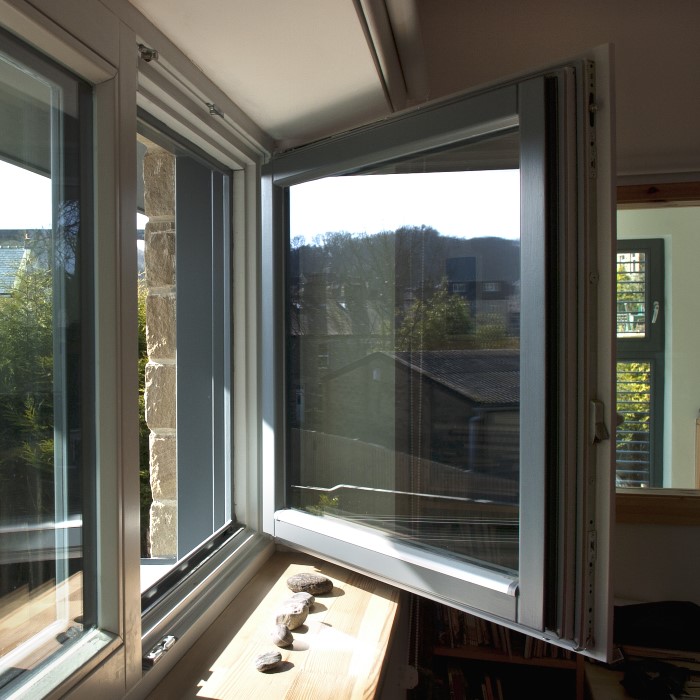 HPH255 : How do you specify high performance windows? – with Chris Herring

Chris Herring, Director at Green Building Store, explains why careful consideration should be given when specifying windows.

With a father who was a keen environmentalist, Chris was raised with an awareness of ecological issues from a young age. A builder by trade he has been in the industry since the 1980s and is now a director at Green Building Store.

Windows aren't just another building element, they're a critical one

Chris emphasises how important it is to get the right windows on a building project. They matter to the feel of the house and how we feel in the house.

They have physical and architectural functions, they're part of the fabric and the thermal performance, there are safety issues in that you need to be able to get out of them, they might have to protect against fire, and obviously let light in.

When it comes to specifying windows and bringing all that together, many of those functions can actually be in conflict with one another. Often it can be a case of finding the best compromise.

Manufacturers and suppliers should be part of the design process

With components and performance levels in buildings becoming more complex, Chris would like to see manufacturers and suppliers becoming more part of the team. They can bring their expertise at an earlier point and be more involved in helping to specify the right windows for the job.

Chris says that with a little more attention to detail and extra skill, a building can, and should, be made considerably better. With the thermal envelope key to the performance of the building, triple glazing should be standard in the UK climate to make it work.

There is more energy loss from windows than any other part of the fabric of a building. Their thermal transmission will always be a weak point, but they do also bring solar heat into the building. That energy balance between the gain and the losses is what's so significant with windows.

Being around 10-15% of the area of the building, they typically make up a disproportionate amount (roughly 30%) of the losses.

If you're north facing you have no significant energy balance. It's just a loss so the logic then would be to have small windows.

With a Passivhaus, it's about looking at how to get the best balance between those window heat losses and gains, and typically they're approximately in balance, so are neutral in their effect.

Chris thinks it's worth taking time to understand a little bit about these values so you can understand more about the performance, rather than just being led by someone else.

A measurement can also be taken for the heat loss through the window frame (usually worse than through the glass).

The Psi-value is the heat that is lost through the edge of the glass where it meets the frame. That is measured as a heat loss per metre perimeter of glass.

Those three factors, the frame value, the glass value and the Psi value, are added together to give the U-value of the total window.

Each window will have a different U-value so they are all modelled separately in PHPP.

G-value: this is the measurement of how much solar gain actually gets through the glass. The more panes and coatings there are, the more you restrict the amount of sun that can get through.

Lambda-values: this relates to thermal conductivity. It applies to every material and is actually the inherent quality of the material.

It’s quite different from the U-value, which is about an area value, if you like; it’s per metre squared. And we’ll use that thermal conductivity to then calculate the U-value.”

Coming back to what the suppliers and manufacturers offer, I think this extra value of supporting people further, supporting architects, supporting clients, is actually critical. I think it will become more and more important for suppliers to add those extra values to supply. It’s not just a widget that’s somebody else’s problem how they fit it, the supplier should be going further down the chain and advising people how to fit it and helping them to get that detailing right.”

While PHPP gives an idea of overheating across the whole building, it doesn't differentiate by room. Understanding some of the causes can be helpful. A full height window for example, while perhaps desired architecturally, won't increase the light level a great deal because you're only lighting quite a small area (it's higher light that has more effect in terms of lighting the building). However, it will result in increased overheating because it's still heating the floor up fairly close to the window, and that's heating the room up.

Trying to get round that by using shading would need a much bigger overhang to fully shade the window, which is probably unlikely to be used. So in that case, although the overhang can be shading the top half of the window, the bottom half going down to the floor is not shaded and will result in overheating.

Something else to bear in mind is that a window above 800mm from the floor doesn't require safety glazing, which can make considerable cost savings.

Green Building Store made the decision some years ago that triple glazed would be the only window they would offer, but there are different types of cladding. They don't engage very much in the conversation around uPVC windows because the evidence they've seen shows how environmentally damaging they are.

There are also questions around the environmental impact of aluminium clad windows. The energy use in smelting and even recycling aluminium is quite high.

“We’ve always tended to encourage people to go to non-aluminium clad windows because we think that the evidence seems to show that it lowers the environmental impact of the window. We have bowed to demand, if you like, and now offer aluminium clad as well.”

Timber windows do need painting every 10 years and adding up that expense will probably make it similar to the cost of aluminium cladding. But what most suppliers won't tell you is that the aluminium cladding will fade over time and you will likely lose the appearance within 20 or 30 years.

“If people come to us and ask for aluminium clad, we’ll give them aluminium clad. If they want to discuss the issues then we’ll certainly discuss that with them. And we do outline some of that information on our website as well, so that people can think about those issues.”