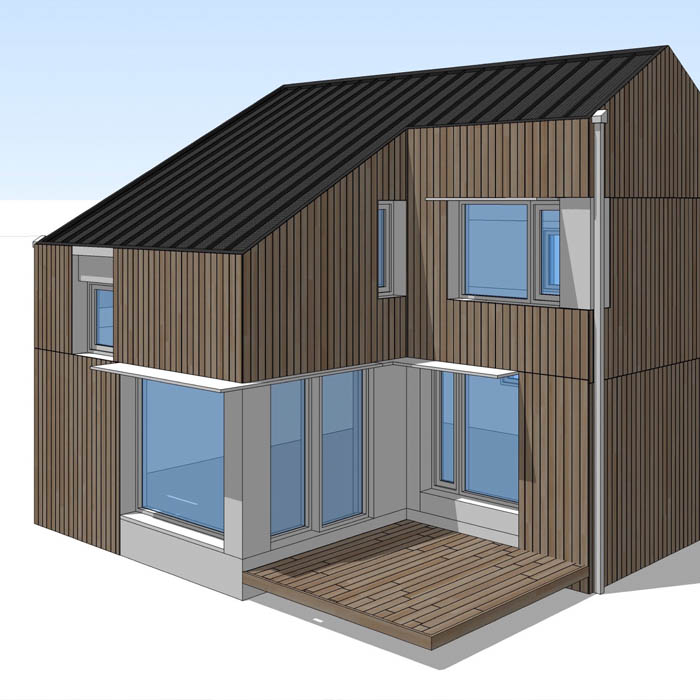 HPH252 : How to reduce the embodied carbon of your new home – with Chris Magwood

Chris Magwood, a director at the Endeavour Centre in Canada, explains the importance of embodied carbon and how building with plant-based materials could transform our new homes into carbon sinks.

For the last 8 years he's been teaching at the Endeavour Centre which is a sustainable building school based in Peterborough, Ontario.

What is embodied carbon?

Carbon dioxide is an expression of all greenhouse gases

For a long time the term that was being used was embodied energy, but it’s important to realise that energy isn’t necessarily a proxy for carbon.

So, two factories could use the same amount of energy, but if one is all solar and one is all coal powered, then the emissions profile of the two would be very different.

Even though in embodied energy terms, that number might look the same. So, this is specifically trying to make emissions the focus and not just energy use.

While we probably understand that different building materials have different carbon footprints, when Chris crunched the numbers he was surprised by the extremes.

Chris comments: “I was pretty stunned at the results in that some things just had such a huge carbon footprint and I had never really considered that impact being so big before. And then some things were miniscule.”

As plants grow they pull CO2 out of the atmosphere and release oxygen. Effectively they put the carbon into their physical structure.

So if you’re building with a material that has atmosphere carbon stored in it – basically any plant material – in terms of the calculations, it's a negative emission. In other words there's a drawdown of carbon rather than an emission.

“Building with a lot more plant material, we could not only reduce that carbon footprint to zero, we could actually take it into the negative numbers and make drawdown buildings that are in their way drawing down climate change rather than contributing to it.”

Straw is one of the best materials

Chris compares two plant-based materials as an example of how even a little processing can increase the embodied carbon.

Although Cork requires quite a bit of heat in its manufacture, it still ends up being a net store of carbon.

Straw, however, has almost no emissions in terms of the harvesting and manufacturing. It's also the waste product of an annually renewable crop. And in the case of grain straws, the carbon in the stalks would have just returned back to the atmosphere in fairly short order.

Chris adds: “Even though all of these plants more or less store a similar amount of carbon, the amount of processing energy that’s gone into them does change the net profile.”

Timber has a more complex picture

It’s much harder to attribute carbon storage to timber because the carbon that’s in that tree, depending on when the tree was cut, that tree could have gone on drawing down more carbon as a living tree than it does as a stored tree.

And if you only end up using about half the volume of the tree to make a timber product and the rest of the carbon from that tree ends up back in the atmosphere, you haven’t net stored any carbon. And if you’ve released a whole bunch of carbon from the soil of the forest floor, then it may be worse than a draw down. It might actually cause emissions.

We could become more intentional about what our buildings are doing

Chris is not advocating that all buildings need to be entirely plant based, but he does see a massive opportunity to be more intentional.

“If you can weigh up the carbon storing materials with the carbon emitting materials, you can actually plan a building to land on a target that you’re aiming for, whether that’s carbon neutrality, storage or a slight number of emissions.”

This is third party document where the third party goes in and looks at a manufacturer and traces the entire chain of that product and essentially does a calculation to look at its global warming potential from harvesting of the raw materials through the entire manufacturing process.

Chris explains how he used this information: “I’m basically using those numbers to then multiple it out on my own buildings. So, if a particular environmental product declaration says there are two kilograms of CO2-E per kilogram of this material, then I figure out how many kilograms of that material are in my building and then I can multiply that out and do that for all of the materials and then total that up and get a net, whether it’s a net emissions or a net storage.”

Concrete, glass, foam and steel all have high carbon footprints

Perhaps as one might expect concrete, glass, foam, and steel all have significant carbon footprints associated with them.

If you're building a Passivhaus, then your choice of materials is really important.

“The way a lot of people will achieve Passivhaus standard here in Ontario, Canada, is they’ll throw a whole bunch of foam insulation at that building. And when I modelled that, the embodied carbon footprint, the upfront emissions of making that building, don’t ever get paid back by the energy reductions. So, if somebody was using that strategy because they thought they were doing something for climate change, they’ve actually done exactly the opposite.

This goes back to energy not necessarily being a proxy for carbon.

Energy efficiency – in terms of carbon emissions – is only useful if you use dirty energy (with a high carbon content).

“Here in Ontario, we shut down our coal plants a few years ago, and so our electrical grid is relatively carbon free. And so, savings in energy efficiency, especially moderate ones, our code is now pretty good in terms of baseline energy efficiency. Going from that to Passivhaus, while it may have good implications for the owner in terms of lower bills and comfort and all that kind of stuff, from a carbon emissions profile, it’s almost meaningless with the difference between a code built house here in Ontario and a Passivhaus in terms of the emissions profile of operating that building, it’s negligible because the carbon profile is so clean on the grid.”

Download a transcript of the interview with Chris Magwood.