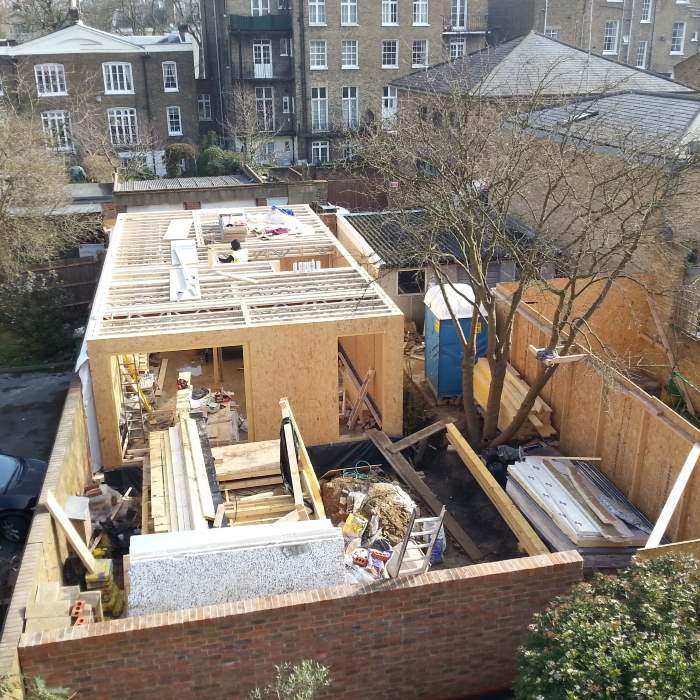 HPH237 : A SIPs Passivhaus build on a tight budget – with Richard Dudzicki from RDA Architects

Architect Richard Dudzicki explains the tricks and challenges of designing a £500,000 house on a £250,000 budget.

Richard's practice concentrates on residential architecture, initially with ecological buildings but now with a focus on Passivhaus. He likes the physics that tells you how the house will perform, and the results that it achieves.

It is not uncommon for Richard to have taken on multiple projects in the same street, based on recommendations, with the Passivhaus Mews II development being one of those.

A difficult to access site in a conservation area

The site is off a Georgian street in an historic part of London, around the back of Camberwell Grove. The buildings on the main road are Grade II listed, and the Mews where they have built the Passivhaus falls within the conservation area.

The ground conditions in the area can be challenging, as they are London clay, and with the numerous mature trees there can be problems with subsidence.

The client was a lady in her seventies, at the time living in one of the Georgian houses but finding it too large for her needs. She wanted to take a section of the garden and build a modern, 120 square metre, three bedroom home with a courtyard and off-street parking, for £250,000.

In order to keep down costs their first application was for a rendered exterior, but this fell foul of the planners, conservation department and Camberwell Society, who didn't want a mock pastiche of a Georgian building, but instead wanted something of the time.

During the development of the plans, Richard had been able to persuade his initially reluctant client to build to the Passivhaus standard. It was at this time that she also announced she would need garden space for the pre-fab training pool that she had just put a deposit down on!

One of the biggest challenges was fulfilling the need for off-street parking, and designing it for a large, electric car that would likely be more commonplace in the future. The building envelope, being a rectangular box shape, had to have an area taken out of it on the ground floor for the parking space. With the house not being wide enough to have a garage and door, they used it as an internal courtyard outside of the thermal envelope. That meant they had a larger surface area exposed to the cold which in turn added around £7,000 to the cost for additional insulation required.

SIPs panels were ideal for the limited access at the site

One of the logistical elements of designing the building package was how they were going to get everything on to the site, and that's where the SIPs panels came in. They designed it in such a way that they would be able to do it in three lifts, for a total price of £47,000 including all of the structural elements and insulation, from Kingspan SIPs Panels.

The speed and necessary logistics for accessing the space meant SIPs were an ideal construction method, and they were able to have the whole building erected in under three weeks. The panels they used were lightweight and thin, which was necessary for the limited site space they had.

Consider condensation if insulating on the inside of SIPs panels

Richard gives a word of caution about insulating on the inside of SIPs panels, as you can have interstitial condensation. It's therefore important to have a condensation risk analysis done. Putting the insulation on the outside makes it easier to adhere to and easier to deal with airtightness.

Airtightness was tested at different stages

Built into the contract was that there needed to be three air tests carried out. The first one was as soon as the building was erected, without the windows. Instead they taped up the windows and doors with a damp-proof membrane and tested the frame, making adjustments to improve the airtightness where necessary.

The second test took place once the windows had been installed. The result of this test proved that the manufacturers didn't know how to correctly install Passivhaus windows, so they had to come back and do them again.

“Specify with whatever contract you’re using – whether it’s the window manufacturers who are doing it or whether it’s your main contractors installing the windows – that you’re clear cut and you’ve got a piece of paperwork before you’re paying for it, that these will be installed to whatever airtightness you want them to. And then have an air test afterwards and then you can cross check it. Because without that, once the windows are in and you’ve started putting the plasterboard on, you’re screwed. ”

The contract protected the client from financial loss

On this job they used two RIBA domestic contracts: one to cover the main building and one for the foundations. This provided protection for the client when the main contractor went bankrupt half way through the project. The client didn't lose money from it, but they did lose around 4 months of time while the contracts were sorted.

The client wanted a very palatial feel for the interior, so a lot of time was spent looking at what she wanted and then working out how to substitute materials to bring it within budget. One way of saving money was to build the staircase out of MDF and paint it white, to give the effect she was looking for.

The kitchen was imported from Italy, and even with the 2000 Euros delivery fee, worked out to be a good deal.

Richard advises against buying individual pieces on eBay, because unless you have a very cheap facility in which to store them, storage is going to be a problem.

A chunk of the budget did have to be spent on a few bespoke items, like the front garage doors that roll back, and the garden deck that slides back to reveal the swimming pool.

One of the other complex issues on this building was making the rooflight work without spending silly money. They achieved it by developing a system of sitting the rooflight in a foam glass sandwich. It also wasn't helped by the original builder having installed double glazed units instead of the triple glazed that had been specified. They got round this by putting in a further double glazed unit to create a quadruple glazed rooflight.

“The other thing that’s important with anything where there’s a tricky situation like Passivhaus, for instance, or anything with complexity – Passivhaus isn’t complex. It’s more a question of keeping an eye on the builder. What I mean by this is be careful when you go to site and make sure that you’ve got someone who’s got experience, who’s cross checking what the builder is doing. Because if you move past the stage where it’s too late to fix it, that’s where it can get really expensive.”

Be strong and stick to your ideals

There was many a time that the client had doubts about Passivhaus and wanted to leave it, but Richard stuck to his principles. Thankfully the client now loves it and proudly shows off her house at Passivhaus open days.

In terms of what Richard has learnt from this job, “I suppose for me as a practice, don’t listen to clients when they come up with builders ideas if you’re not very sure that the builder is any good.”

As a practice Richard thinks they probably made a loss on this job as all the R&D on the project probably amounted to three-times the number of hours that they actually charged for. Richard however considers it a research project from which there was a huge amount of valuable information they were able to benefit by.

Richard explains that the physics of Passivhaus is about 10% of the challenge, but making the house work for the client makes up the rest. There are many questions that he says a client needs to work through, rather than just thinking ‘I want to design myself a Passivhaus'. These would include how many children will live there, how long you plan to live there, whether it's going to be left to your children, the longevity of the house, whether it needs a ten year warranty, etc.

“And one of the things I have learnt from this… is Passivhaus is a fantastic system but don’t let you be swayed by just Passivhaus rules, regulations and what you can and can’t do. Basically, you can do anything as long as you’ve got an architect who understands what Passivhaus is about. You can design pretty much any sort of building you want to and apply the principles to it. And I think that’s really important.”

Download a transcript of the interview with Richard Dudzicki.