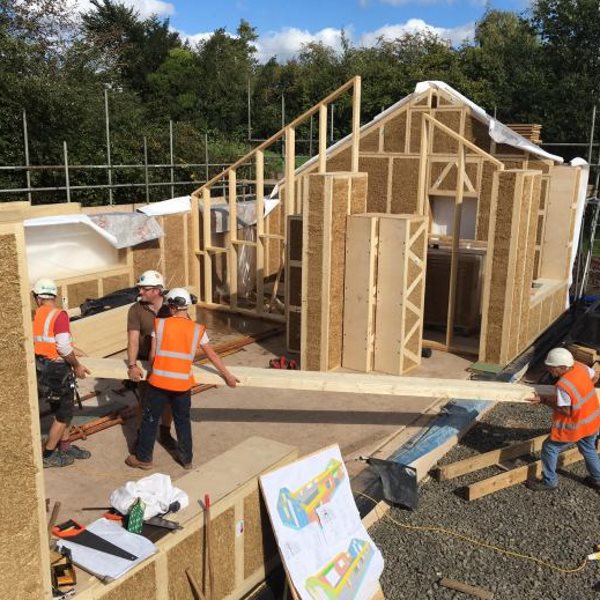 HPH229 : How do you build a straw bale house? – with Barbara Jones 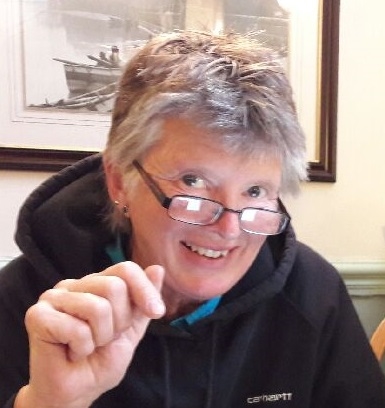 Having trained in carpentry and been involved in the construction industry for many years, Barbara took a year out in 1994 to consider environmental issues and how they were being approached in other countries. A two day course for women in straw bale building in California sparked her passion.

Barbara is working with a company in Lithuania, Ecococon, which is making the straw panels to a high standard. They use large round bales which are unrolled in the factory, and using a machined process are transferred into a wooden box and packed to a very precise density and moisture content. Barbara uses the distinction of it being straw in a box, rather than a straw bale in a box. The boxes can be made into different sizes and shapes of panels, according to the design of the building. Being an engineered frame makes it simple to build with, thus appealing to a wider clientele, and it also meets Passivhaus standards. 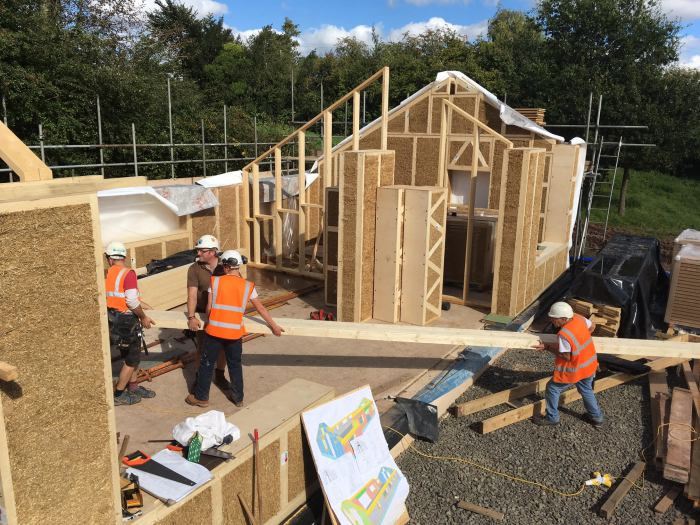 Once on site, the walls of a three bedroom, two storey house can be erected within three or four days.

Despite being based in Lithuania, the lower costs of production there mean it is a cost-effective way of building. Barbara believes they are able to compete on an even footing with masonry and timber frame houses, but that they are offering a better product: better thermally and also more durable.

“They’re warm, they’re cosy, they’re peaceful and they just make you feel good. They’re comfortable. It’s something that is really hard to quantify in this world where everything has to be done by science, but if you talk to anybody who lives in a straw bale house or who’s spent some time in one, they all say the same thing.”

“They’re not soulless and they’re not too small, like people say about modern housing.”

Being passionate about this principle, Straw Works approached Dragons' Den for investment, realising that what they were asking for was more of a philanthropic gesture than a credible return for the Dragons on any investment. Although the Dragons didn't invest, they did succeed in raising awareness and have a number of people interested in helping them on their journey, and particularly to move into the social housing sector.

Barbara suggests one way of getting round the difficulty of finding land, is to join with community land trusts, and co-housing and housing co-ops. After that it's a case of thinking about your design, the type of building you want, whether you are going to build it yourself or get someone else to do it, and what your budget is. Also bear in mind the benefits of keeping to a simple form.

“What we always say to people is try and imagine something that is enough but no more than that. I think that’s quite a hard thing in this culture, to be sufficient and not exaggerate things….Keep it simple, keep it small and design it so that you can add extensions on if you need them later. But just build for your needs as they are now.”

Not all bales are suitable

Good bales for building are ones that are dry, reasonably dense and uniform in shape. Despite surities from farmers as to the quality of their bales, it is always wise to take a look at them yourself, pulling out 10 random ones to check they are suitable.

It's good to find ones that are baled by big contractors who are using modern machines. They're selling by weight rather than number of bales, so the bales tend to be very dense. Also make sure the straw is long, which ties the bales together well, and not too short or brittle.

Although any type of foundation can be used, Straw Works encourage a totally natural package and in particular like to use car tyres. Recently they helped a community building project, a church in London that is the biggest building in the world with car tyre foundations. Filling them with pea shingle they saved the church £100,000 against the cost of what cement foundations would have been. 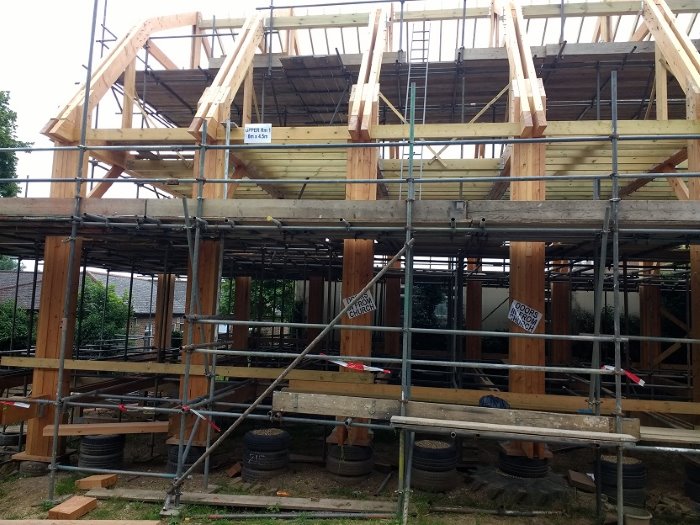 Bales are compressed as far as they will go

One of the guiding principles of building with straw is that it should be raised off the ground, by a minimum of 300mm, but preferably 450mm. That's partly achieved with the tyres, and then on top of that is a structural box beam made of timber, with durable timber on the outside, and then the bales on top of that.

For load-bearing, in-fill and hybrid methods, they use the densest bales they can and then compress them further so they end up with a density of around 100-120 kilos per cubic metre. 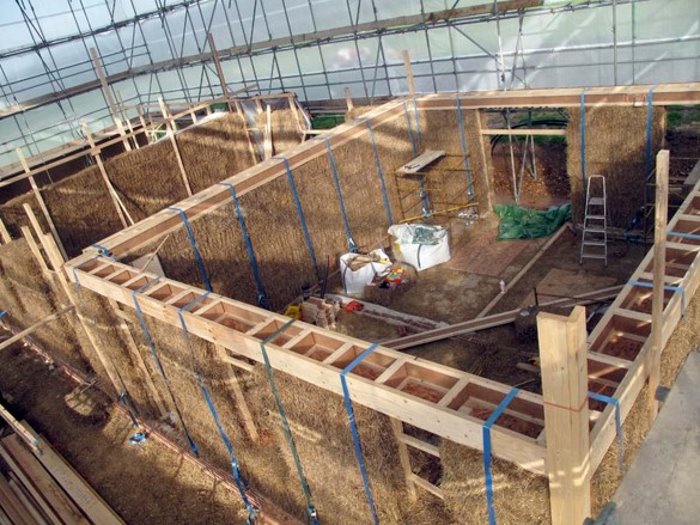 They use standard details for going around windows, but don't use sticky tapes as they don't believe the glue will last as long as the houses. Instead they have windows flush with a timber sub-frame, then covered with wood fibreboard which helps with any possible thermal bridging, followed by a lime plaster and a linseed oil mastic seal between the plaster and the timber window.

Load-bearing houses are held together by structural ring beams. There's a base plate at foundation level, a wall plate at first floor level, and a roof plate at eaves level, with the floors and ceilings hung off those. 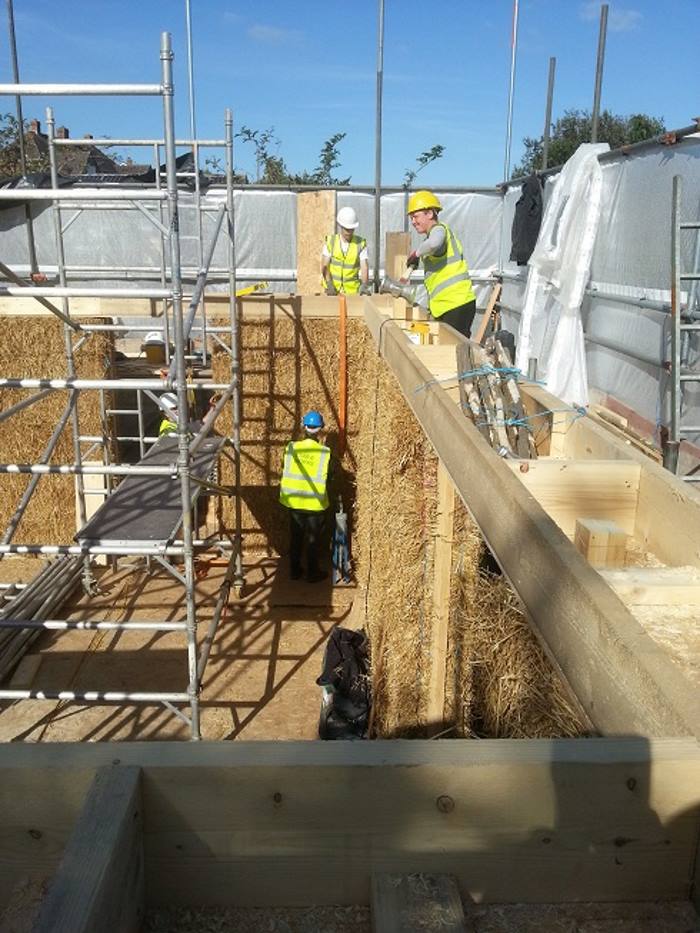 The whole wall system must be breathable, so generally the outside would have a lime plaster, which is also very good at preventing water ingress. Initially it has to be protected for two or three months until it builds up that ability.

Inside they use either lime or clay plaster. Clay plaster is particularly user-friendly and time-rich self builders can even make their own by digging it up from somewhere. 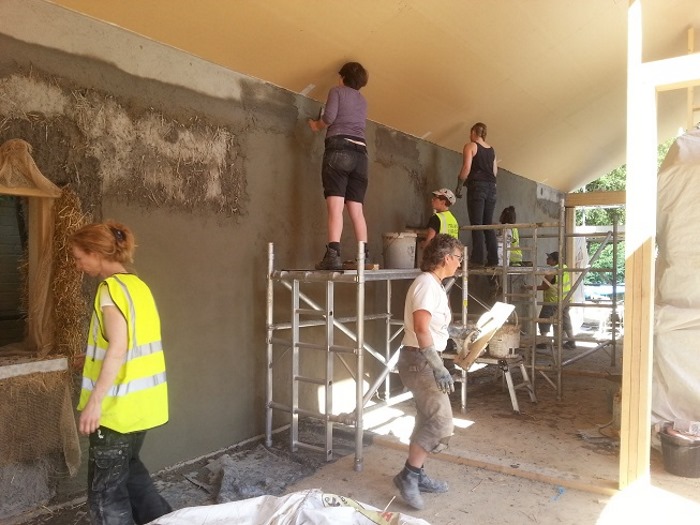 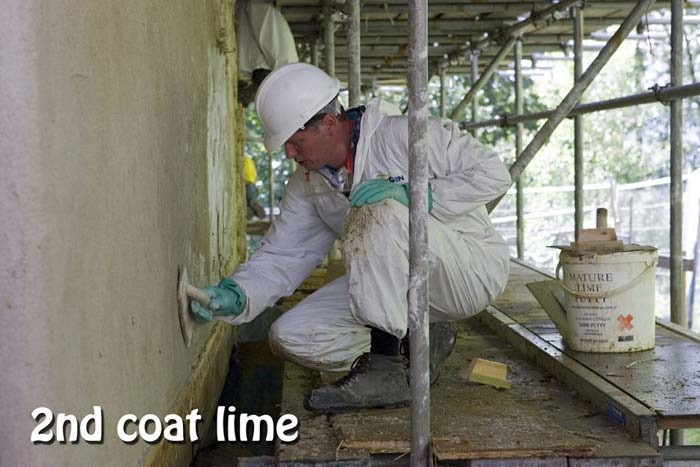 Moisture can escape from the building

Being a healthy house is a feature of their buildings. The indoor air quality is good because nothing toxic goes into them, and the paint, plasters and straw are all breathable materials. That means that there’s a movement of moisture from inside to outside all the time because of the negative air pressure generated by inhabited houses.

Moisture doesn't penetrate into the house from the outside.

“We’re talking about movement of vapour, not movement of moisture. Most people don’t really understand what that means. It’s not water, it’s not steam, it’s molecules that are so tiny you can’t imagine them. So, it’s not things moving through like you’ve got water or steam somehow that could condense. It’s not like that. It’s at a vapour level, a molecular level. Unless you’ve got a house that’s been standing empty for a while, the movement is always from inside to outside. That’s why empty houses get damp whatever they’re made of, because it starts coming the other way.”

Not an advocate of Passivhaus

Although Barbara does like her buildings to be high quality, airtight and with good details, she does think “it's all gone a bit mad and too far and too techy.” She is not an advocate of Passivhaus or MVHR but likes to be building to a level just under needing an MVHR, which means to an airtightness of five air changes per hour, although some of her buildings have been much less than that, even without the use of tapes.

“Gas costs a quarter the price of electricity and these passivhauses are all run on electric. They don’t have gas anything. So, the sorts of savings that we’re able to make in the UK are not the same as the savings they make in a country like Germany where their electricity price is a lot lower.” “I have talked to people who are not really saving that much more. Yes, they don’t have to pay much money on heating, but they’re paying a lot more on cooking with electric and on the running of the MVHR.”

In terms of the level of understanding required to self build a straw bale house, Straw Works run courses which cover the basics of what is needed. There are one day theory courses designed for people at the start of their journey and covering what planning permission requires, what you have to do for building regs, other service requirements, engineering, site surveys, what to expect if you're building your own house versus if someone is building it for you under your direction, and why thinking about straw bale as the heart of the design is so important.

Then there are courses covering details, such as window details and how to build the roof first, even if you're doing load bearing.

There is also a one day course just about plasters – clay and lime, why you should use them, what their properties are, where you can get them from and how you use them.

As a school they also run courses on car tyre foundations and carpentry where they will follow a curriculum, and sometimes have volunteering opportunities on projects too. For the volunteer projects they always make sure there is someone very experienced leading the volunteers.

“But I would really, really like to see mass housing in straw and I’d really like to see the little tiny buildings that we do, the garden buildings, take off. Because that really is the way that we’re going to keep the school going, by finding an income that can make it possible for us to offer bursaries to people. Because we’re in the field of private education at the moment and I’d like to see accreditation for our courses.” 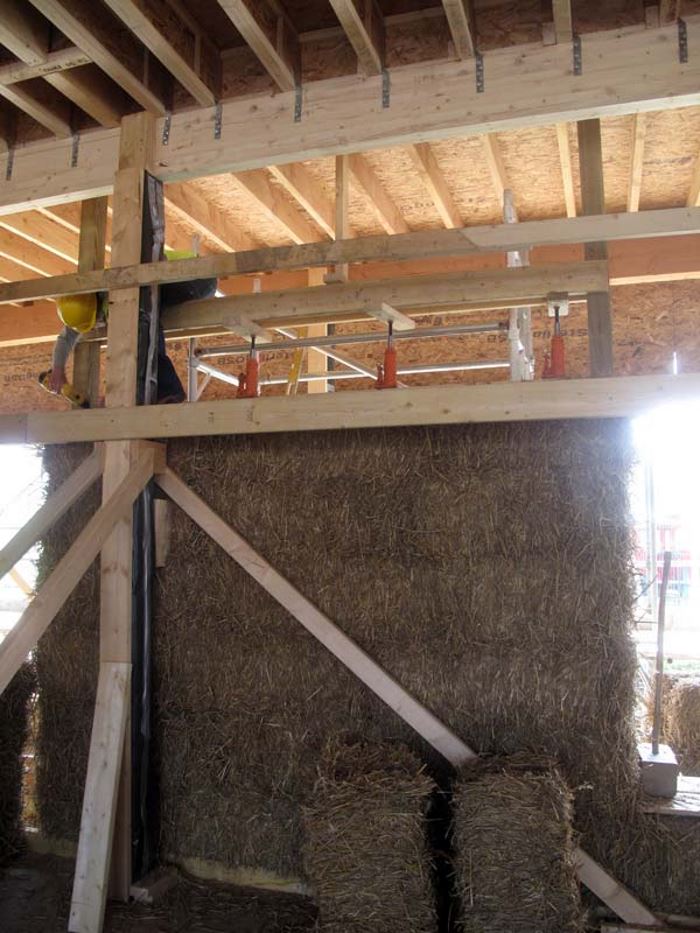 Find out more about Barbara's book: Building with Straw Bales.

Download a transcript of the interview with Barbara Jones.