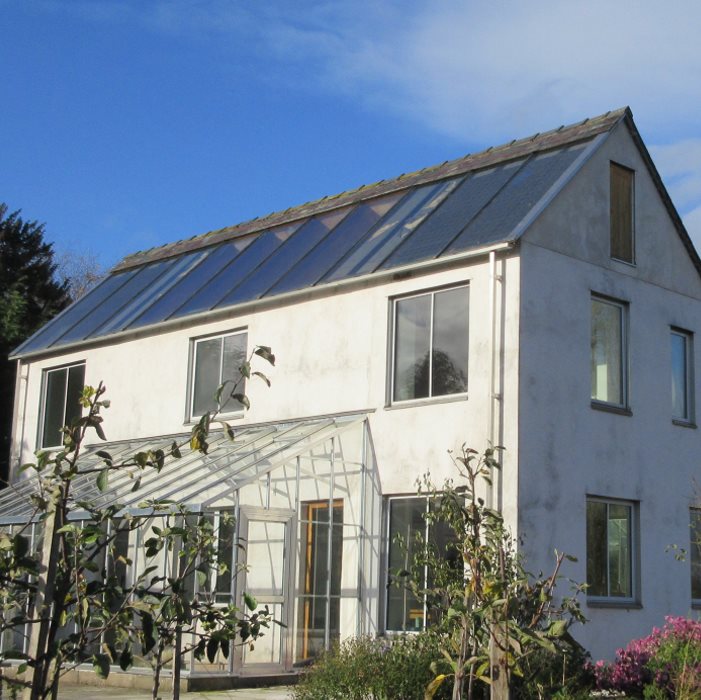 David Olivier from Energy Advisory Associates shares some of his personal and professional experience of creating energy-efficient homes. 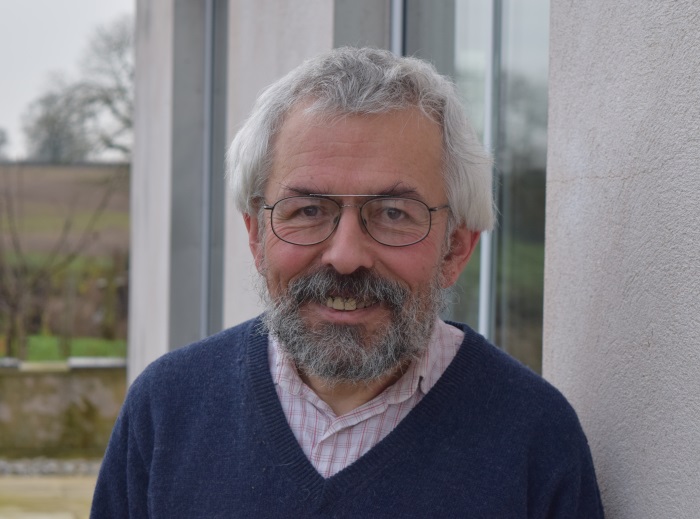 David Olivier has 35 years of experience in supporting UK architects and engineers on leading energy-conscious building designs. He was involved in environmental research early in his career before starting his own freelance business advising people on energy and environmental improvements. In 2012 he moved into his own passive solar energy self build home in Herefordshire. 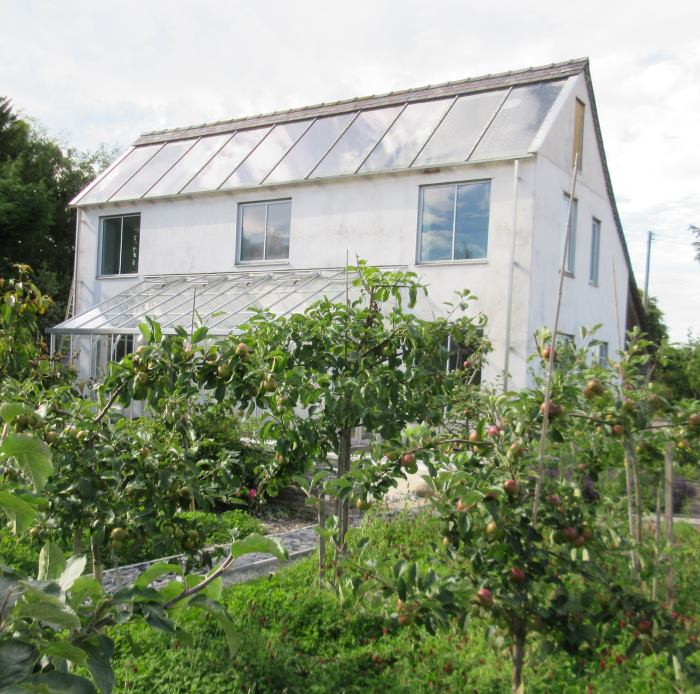 National policy emphasis should be on investment in domestic energy conservation

When David left education in the mid 1970s he went to work for an environmental research body linked to Friends of the Earth, called Earth Resources Research. While there he worked with three colleagues on a study of the long term energy needs of the UK and the potential for meeting them with renewable energy combined with better energy efficiency.

Published in 1983, the report concluded that by 2025, if the political will was there, the UK could provide around two thirds of its energy from renewables. It also concluded that the UK could improve its energy efficiency by about threefold over 50 years, with the result that it could reduce its energy consumption and increase the standard of living of most people.

Back in the '70s the concern was more about the price of oil and heating bills rather than CO2 emissions. Even today, there is still the concern about energy prices. David suggests that despite inaction and lack of interest from governments, there has been an improvement in energy efficiency over time in the UK. The use of energy efficient lightbulbs for example has seen a marked effect on electricity consumption.

David would like to see a shift in policy away from national investment in nuclear energy and fracking, and instead see that money invested in energy conservation in the domestic sector, such as subsidising the cost of buying highly energy efficient domestic appliances.

Aim for a higher standard than UK building regulations

David suggests that if you're looking to self build you should ignore the standards set by UK building regulations and aim to exceed them. He explains that the standards set in other European countries are far superior to our own, with Sweden for example having higher building standards in the 1980s than we have today. He recommends applying more insulation and thinking about the Passivhaus standard which will give you a more comfortable, draught-free environment.

When it comes to securing a building plot David's advice is, if you have the option, consider a move to parts of East Anglia, Scotland or Wales, where they are more readily available. In case of uncertainty and to avoid overpaying for it, he would recommend you have a chartered surveyor give a valuation.

David suggests looking at the council planning policies for the areas in which you are searching for a plot. His search area incorporated 6 different councils, with 6 very different planning policies ranging from relaxed and positive to completely draconian! He had a 6 month long battle to reverse the decision of a junior planning officer on what really should have been a minor point. If in any doubt about this stage, he recommends first consulting a planning expert before liaising with council officers. Another suggestion is to quote to officials parts of the Self-Build and Custom Housebuilding Act 2015, which is an act that puts a legal duty on the local authority to make efforts to help self-builders obtain serviced plots.

Always consider that if you're planning to self build you could be living in the finished house for 10-20 years or more, and over that time you're going to want to make heating it affordable, no matter what the future holds. Even if you're building in a town David recommends orientating the house towards the sun.

“Even at the present day energy prices you can justify doing a lot more than the UK building regulations require you to do when you insulate a new house.”

David moved into his house in 2012 but still has some areas that need finishing. The house is 105m2, two storey and detached. The windows are approximately 70% south facing and their area is equivalent to around 30% of the floor area. By comparison, he says a developer house would be closer to 10-15%. The large windows provide more all year round solar gain, though it is important to incorporate methods to avoid excess summer solar gains. Even before external shading and curtains have been fitted the temperature of David's house has not exceeded 24.5°. When this shading has been installed it is likely that it will be 2-3 degrees cooler in summer heatwaves. 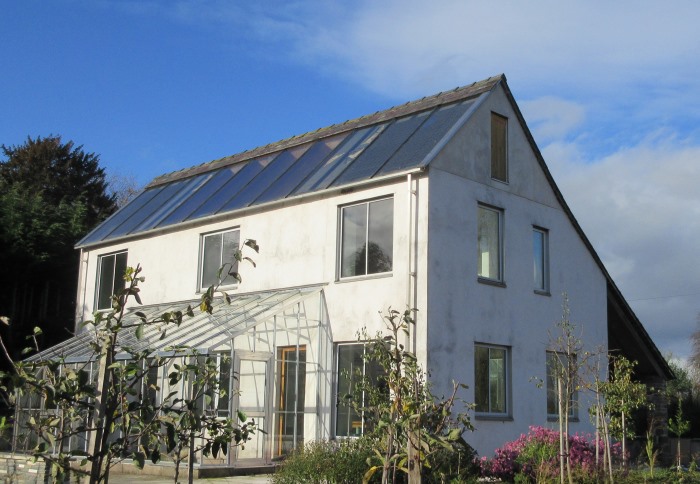 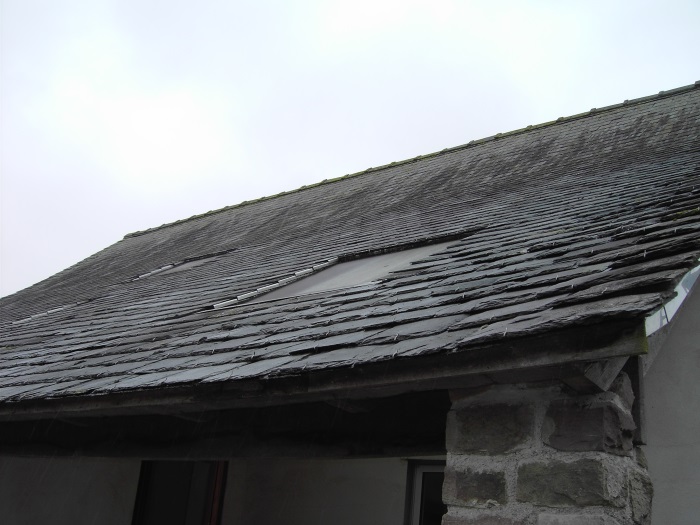 The house is of concrete construction, with concrete floors and concrete block partition walls, which has the effect that the summer temperatures are not as extreme as they would be in a lightweight construction house. 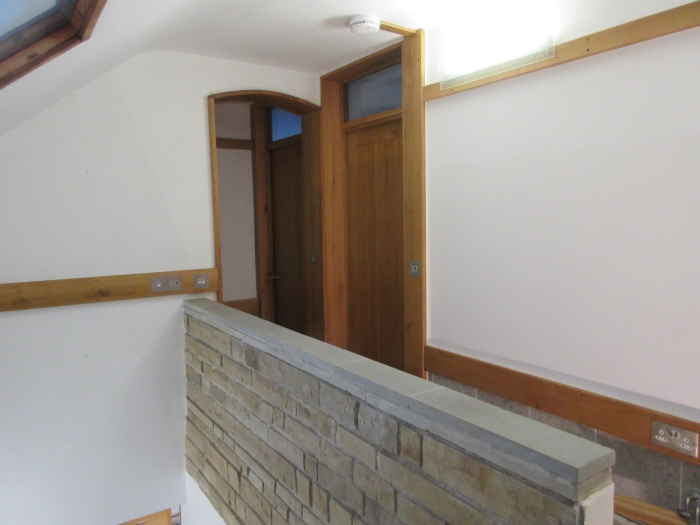 “I was keen to go down the thermal mass route because it's a way of making fuller utilisation of passive solar energy, which is almost free if you are building a new house….Passive solar is something which everybody should be using long before they consider using solar water heating or solar photovoltaics.”

David was surprised that failures in materials on his build were greater than failures in workmanship. Particularly he felt let down by the suppliers of three insulation materials, which didn't meet the specification and which caused problems as a result.

Despite being on site at least once every day he wasn't able to avert particularly inept tradesmen from messing up laying the stone floor tiles. 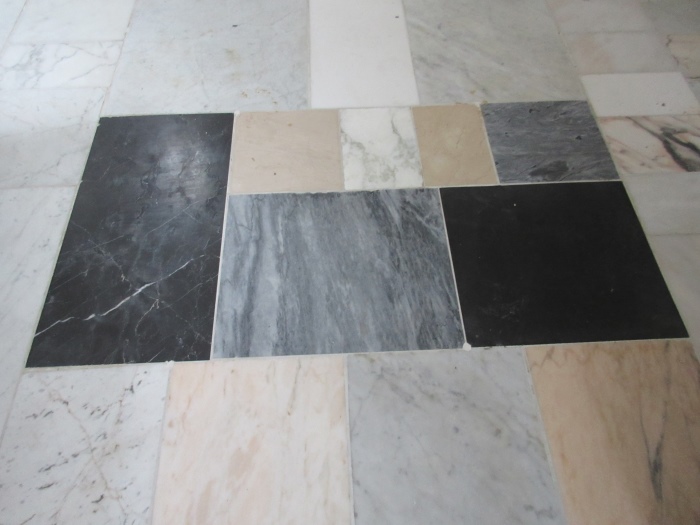 The living room stone floor was ground down by 1mm and the surface repolished after the tradesmen left. This picture is after the remedial works were carried out. 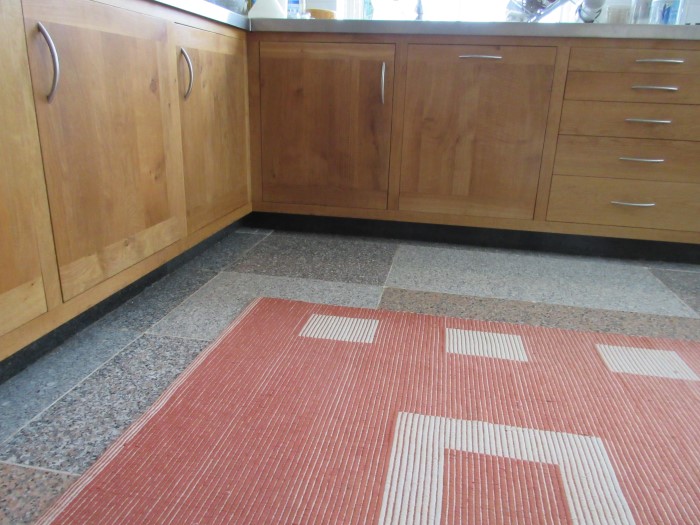 The granite kitchen floor was left uneven by the tradesmen. Being too hard to grind down, it has had to be left unchanged.

David says that friends and colleagues of his from Europe who spend time watching building sites operating in the UK, come to the same conclusion as him – that things just don't operate smoothly.

“They should operate better than that and systems ought to be put in place that mean that they can operate better than that which would make life much easier for self-builders, because self-builders don't always have a construction background and therefore they need to rely sometimes on building tradesmen doing things right. And my experience showed that in one or two cases building tradesmen didn't know how to do it right and I was aware that they were making mistakes, but the average self-builder might not be aware.”

Keep an eye out for David's book about his self build

Download a transcript of the interview with David Olivier.

The Bournemouth Echo reports on a case where a property developer has been fined after falsely claiming that their properties at Pennsylvania Heights, Portland, were built to certified Passivhaus standard.

This has got Ben Adam-Smith thinking for the following reasons:

You can read the article here.

At Regen Media we're always seeing new opportunities arise and are looking for more great people to help with various different projects. Perhaps you're someone who works in construction, you're a Passivhaus architect, builder etc. with a passion for teaching. Or perhaps you're the reverse and are a teacher in education that's wanting to do something around climate change, around building better homes. Or maybe even you work in TV, radio or write for a newspaper but this is where your passion really lies. If this is sounding like you, then we'd love you to get in touch!

There is so much that can be learned from visiting building sites, and The Hub is all about making that on-site experience available to a wider audience. We've been fortunate enough at The Hub to follow the Long Barrow Passivhaus project and our latest video takes us up to the raft foundation stage.
Each month we're adding a new module too. In January we were looking at self build loans, how they work, cashflow, making sure you don't overspend etc.
We also have a community element, with a Facebook group for Hub members to share advice, tips and answer questions.