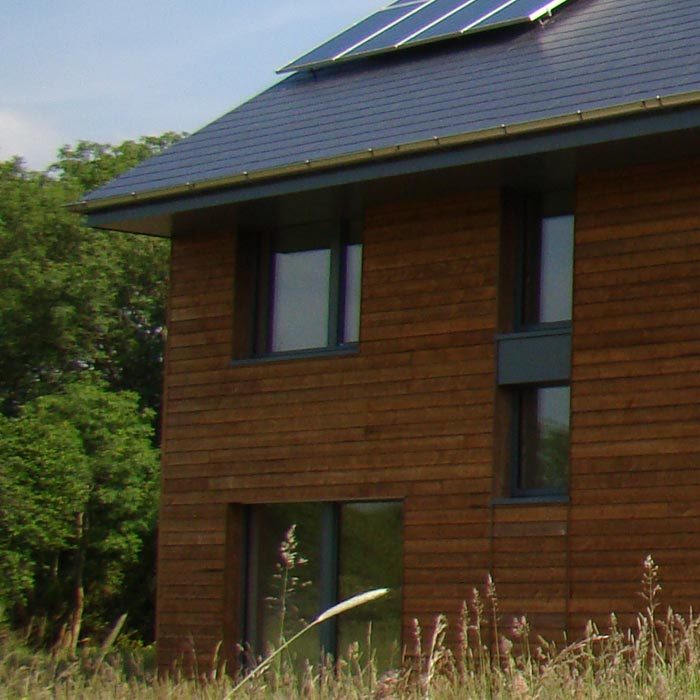 Alan Budden from Eco Design Consultants explains how simple design decisions can drastically alter the energy performance of a house and why this means your designer needs to be using a tool like the Passive House Planning Package (PHPP) to better inform these decisions. 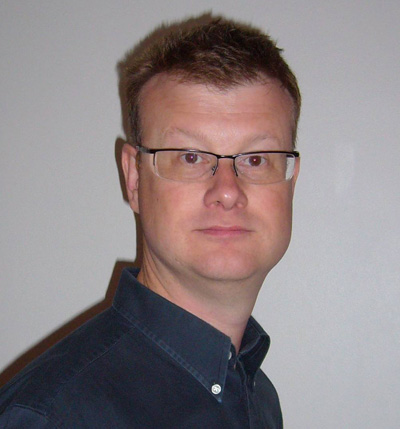 Even as a kid Alan Budden was interested in buildings and architecture.

After training as an architect he became an associate at PRP Architects, where he designed one of the UK's first 5-star houses at BRE Innovation Park.

For the last five years he's been running his own practice Eco Design Consultants as well as teaching architecture at Birmingham City University.

Some Forms Are More Efficient Than Others

The building shape – or form – can make a huge difference to the energy performance. This is because heat loss occurs through the external walls and fabric of the building, and so the more surface area there is the greater the losses.

The diagram below shows how three houses with the same floor area – in this case 100m2 – perform differently (assuming the U-values are constant throughout). 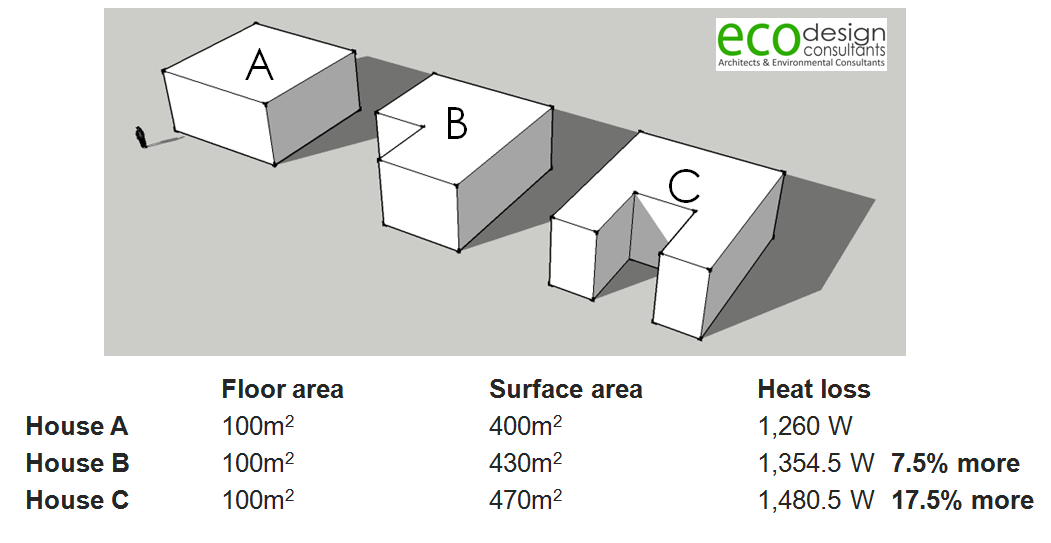 The simplest shape possible would be a sphere but that would not be practical to build or utilise! So the next most efficient form is a cube (in terms of best floor area to surface area ratio).

As the most expensive part of a building is the outside envelope, an efficient form gives you maximum floor area for the minimum amount of materials (and thus keeping costs low).

Energy-Efficient Buildings Must Fulfil Their Function AND Give Delight

Simple buildings don't have to be boring! It's about using different materials creatively and adding to the facade.

Alan tells the story of why he put a narrow floor-to-ceiling window in his Howe Park project because kids love to be able to see out! Although in energy terms it could have been dismissed, it provides delight. 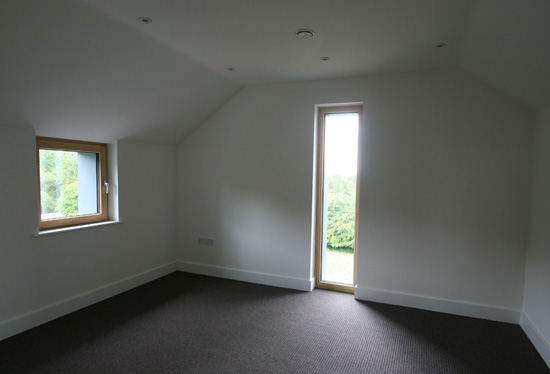 Window Frames Are Probably the Weakest Point in a Building!

While the U-value of an external wall could be as low as 0.1, for a window frame it's likely to be around 1, which would be 10 times worse.

So choosing windows that minimise the amount of framing makes sense.

The diagram below shows some different examples.

Although putting in a dormer window might not make sense in terms of energy efficiency, it could still be a feature that you want.

So in order to keep on track in producing an ultra low energy home, it is therefore necessary to make up for it somewhere else (perhaps by increasing the insulation).

This is why modelling the building in the Passive House Planning Package (PHPP) is so important in understanding the overall picture. 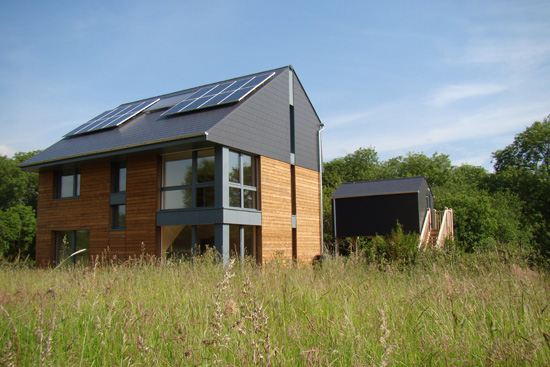 Alan is the architect behind one of the world's most airtight buildings, Howe Park.

With an airtightness result of 0.07 air changes per hour this means that the house is 355% more effective (in terms of heat losses) than one constructed to UK Building Regulations (which is 10)!

Alan says: “Even with a building regulation house now built to fairly good standards, not quite to Passivhaus but pretty good, if you had an airtightness of 10 you'd be losing as much heat through draughts as you would through the insulation.” 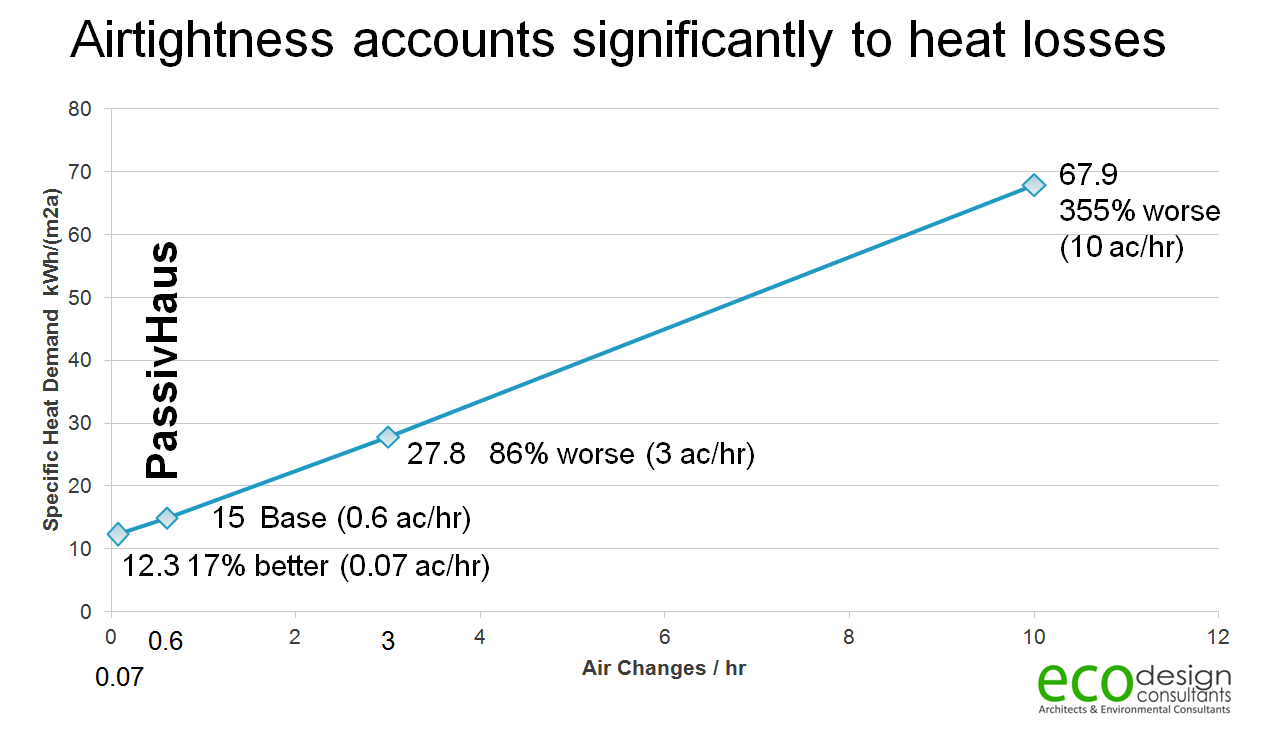 Airtightness is Really About Reducing the Draughts in a Building

Alan thinks about airtightness in the same way as the old Everest advert! It's really about reducing the draughts.

As Alan completes more and more Passivhaus projects he believes it is raising the quality of the builds.

When everyone on site knows there's going to be an airtightness test at the end, they make sure there is attention to detail in all areas. 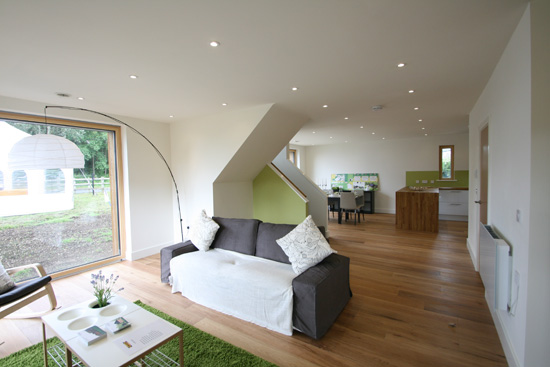 Download a transcript of the interview with Alan Budden.