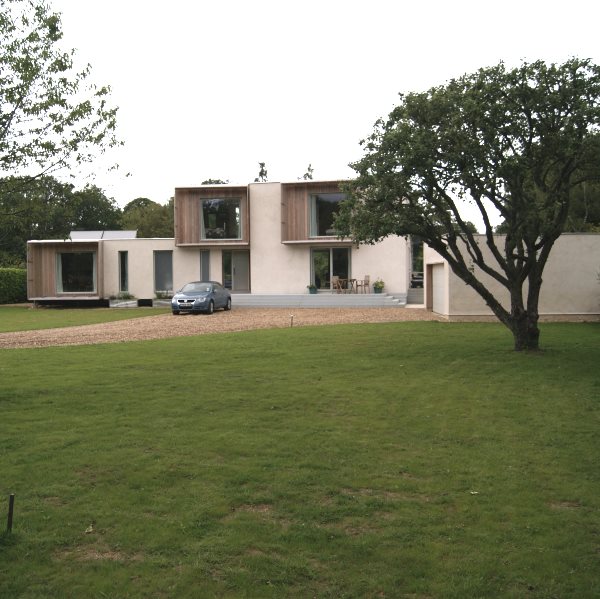 Diana Woodward explains how her house was first modelled on a computer and then the 3D digital information was transformed into exact physical replicas. The components were fabricated out of WISA board on-site using a mobile manufacturing facility. 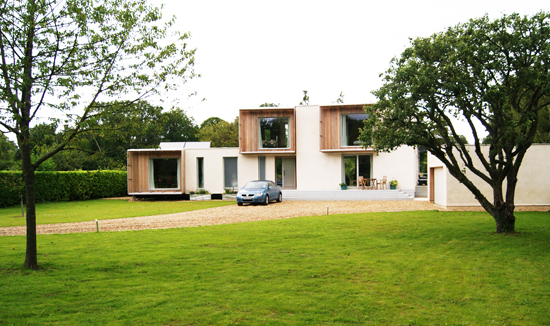 Diana Woodward and Celia Brackenridge were keen to move closer to their respective elderly parents. After house-hunting for some time they realised that the majority of properties on offer were dull and not very energy efficient. 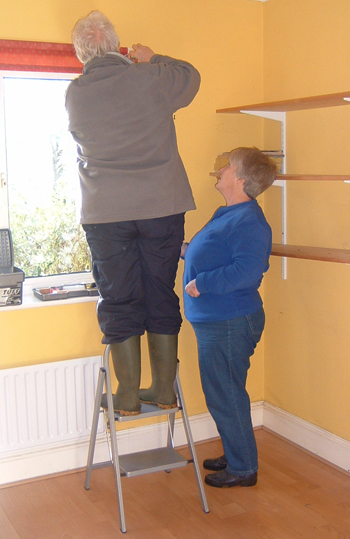 Celia and Diana in the old house

They Wanted a House with Lots of Natural Light

Diana has realised over the years that she needs lots of sunshine and doesn't want to be somewhere gloomy.

Their ideal plot would also have a view, lots of wildlife nearby and not be too far away from amenities, entertainment and the ability to get into London.

Remodelling the Existing Property Did Not Make Sense

After finding a location that met all their criteria, they looked into adapting the existing property to make it fit their needs.

Even by spending £100,000 on an upgrade it became clear that this was not an efficient option, so they elected to demolish it and start again. 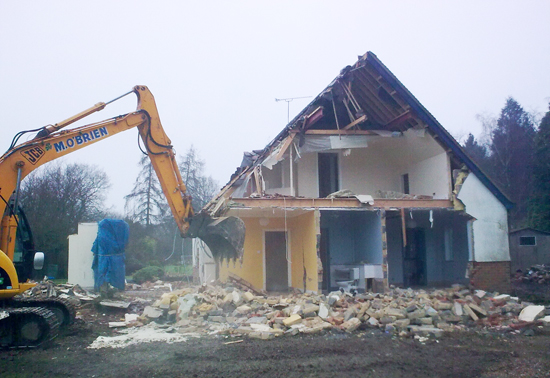 The old house was demolished

Facit Homes Were Looking to Create a Demonstration Project

Diana had spotted an editorial piece in one of the building magazines written by Bruce Bell from Facit Homes. He wanted to create a demonstration project for their D-Process system and this was an opportunity that Diana and Celia wanted to explore.

Diana says: “We set him against the local builder, and we interviewed them and they interviewed us. We gave them both a brief and his response to it was just so much more imaginative and met so many more of the objectives that we had that really it was a no-brainer in terms of going with his design.”

So Celia and Diana self built the project with a local contractor of their choice, while Facit Homes did the design, supply and erection of chassis and some key finished items like the kitchen and staircase.

Although an Innovative Build Method, They Had Faith in Timber

While they were pioneers of Facit Homes' D-Process they were not phased by the approach because it basically boils down to a timber build.

Not only had Diana and Celia extended a property in Scotland with a timber frame, but in Diana's previous job at Edinburgh Napier University she had had a lot to do with the Timber Engineering Research Centre in the Built Environment faculty.

Therefore she knew that timber has been a construction material for thousands of years and it's going to be strong and durable.

The Design was Translated into Instructions for the 3D Printer

After the house was designed it was then translated into technical specifications (which took several months).

With appropriate instructions the computer was able to cut the WISA board (a very strong plywood from Finland) into exact components.

All this was achieved with a mobile production facility which was delivered to site in a shipping container. 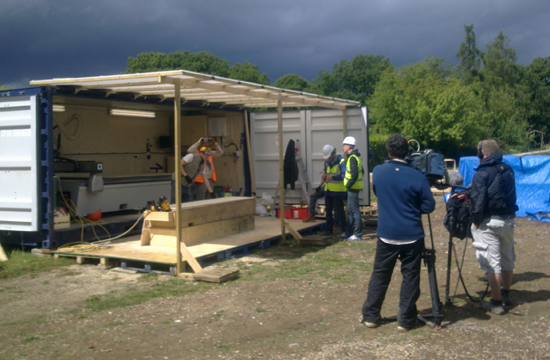 Kevin McCloud has a go at constructing a box

The Components are Small Enough to be Easily Handled

The house is made up of a number of wooden boxes. Diana describes the largest of these components to be similar to a large man's coffin!

As the computer configures the shapes it makes the best possible use out of each sheet of wood, keeping waste to a minimum.

Each shaped piece of wood is also engraved with a number, which helps in the assembly process. The flat pieces of wood are then bashed together with a mallet to form a box.

The idea is that none of the boxes are too big for one or two guys to man-handle on their own, which means no specialist lifting equipment is required. 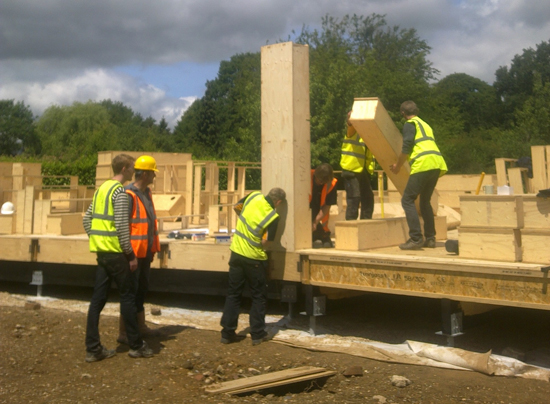 Recycled Cellulose Insulation is Pumped into The Boxes

In order to achieve high levels of insulation each box is filled with Warmcel insulation.

Screw Piles Were Chosen For the Foundation

As the ground is heavy clay with flints and chalk, it doesn't drain well.

So screw piles were inserted at critical points under the house to provide support.

I-beams sit in cradles that are welded on top of each of the screw piles and then the boxes sit in between those to make the ground floor.

The airtightness of the house was measured at 4.3 air changes per hour at 50Pa but remedial work was carried out after this test to try and improve on this figure.

We got in touch with Bruce Bell at Facit Homes to find out how airtight a house like this could be.

He said that part of the challenge on this project was that the contractor failed to grasp the task of sealing the building, particularly around the windows and door openings, so they got a good airtightness score but not what it should have been.

Bruce continued: “Previous self build projects clients have got 1.8m3 @50 pascal. The last projects where we provide turn-key services and contracted everything ourselves we got 1.6m3, 1.4m3 and 1.2m3 @ 50 pascal. This is a pitfall for the self builder, and not a reflection of our designs. We get these results without the use of expensive membrane systems – it's mostly careful management of trades, but it takes experience to be able to do it. This is one of the key reasons the majority of new Facit Homes projects are turn-key contracted by us so we can guarantee the outcome.” 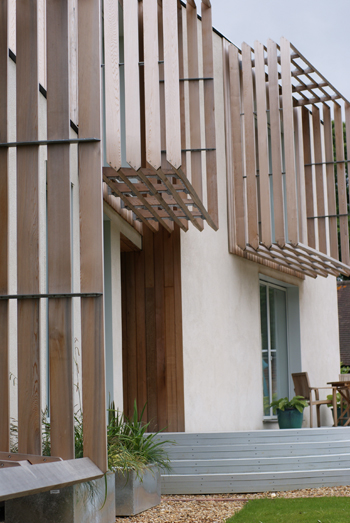 So for gas, electricity and water there’s about £50 credit at the end of the year.

Speed of Construction was a Massive Benefit

One big advantage of manufacturing a house, whether on-site or off-site, is the speed at which the project progresses.

When you're paying £1000 a month in rent to live somewhere while the work goes on, this can quickly add up. However, Diana and Celia's project started in May and was completed in November. 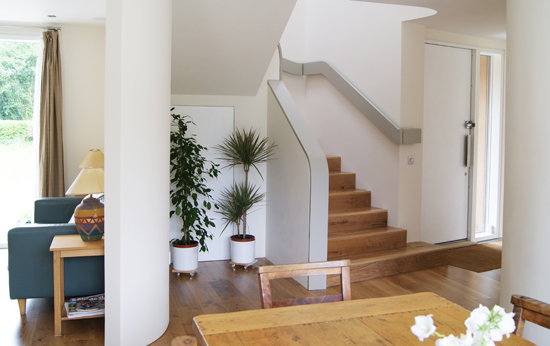 The basic wooden structure of the house – excluding the screw piles and levelling of the site etc. – cost £73,000.

Overall, including the fixtures and fittings, they spent about £300,000 on the build.

Being Above the Level of the Garden is Something Diana Loves

What Diana particularly likes about the design of their home is being slightly above the level of the garden, and also having large areas of decking.

This means they feel very connected to the outdoor environment.

Watch a video about the D-Process

Download a transcript of the interview with Diana Woodward.

Would you be the first to use an innovative build method?