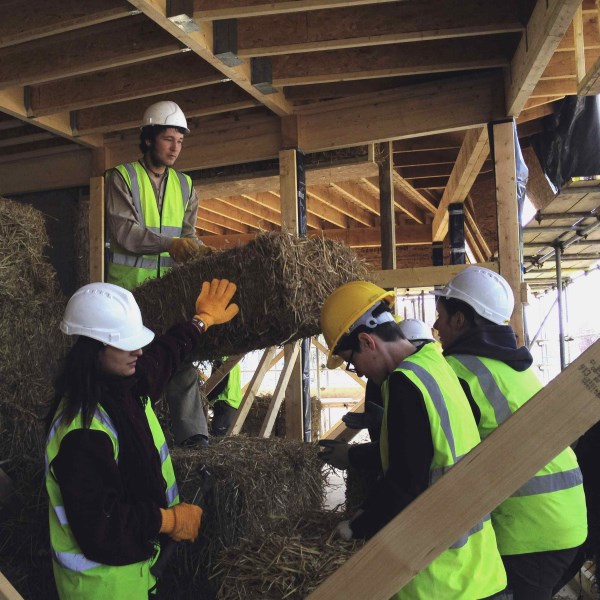 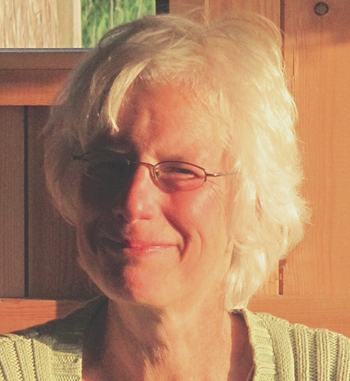 Fran Bradshaw was a builder before she became an architect but she's still very much interested in the practical side of things. A lot of the work she does at Anne Thorne Architects has a focus on sustainability and community-based work.

This episode is about a straw bale house that she's building for herself in Norfolk, UK.

Fran got inspired to build her own house with straw after working on a project for Haringey Council.

Local people helped both design and construct the eco-hub, which Fran describes a wonderful experience: “It was really exciting being on site and just seeing how enthusiastic people were and what a great community benefit it was.” 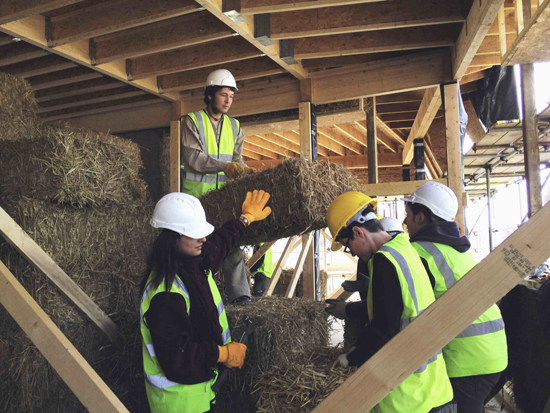 Upon completing the eco-hub, Fran noticed that lots of people commented on the quality of the environment.

The acoustics, humidity and the colours are all very different in a building constructed of natural materials – people liked this. 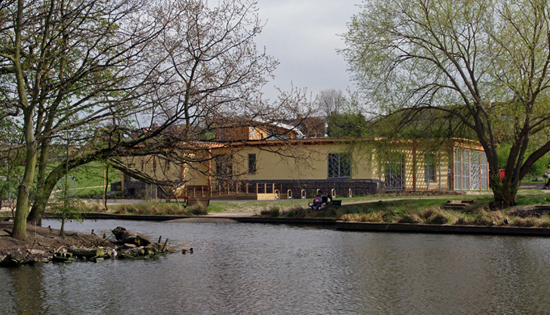 Getting the Details Right is the Biggest Challenge

While there have been straw bale houses in mainland Europe that have reached Passivhaus standard, there is yet to be one in the UK.

The challenge is in turning what is a rather chaotic building material into something that is actually very precise, because to achieve the Passivhaus standard all the details on all the joints have to be very neat and carefully airtight. 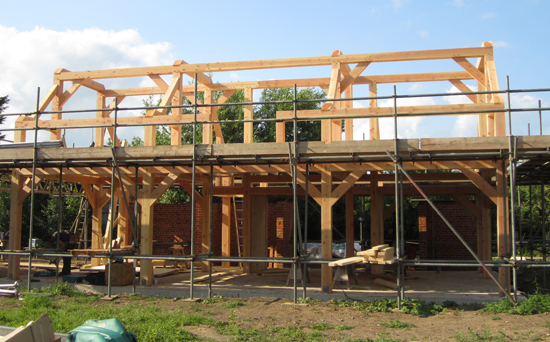 The timber frame goes up on Fran's house

The Team Must be Led by Someone Experienced

Although one of the reasons Fran chose to build her house with straw was to involve her friends, she leveraged the experience of Straw Works.

So guided by one or two experts, the rest of the team members just need to be enthusiastic and prepared to do a little bit of physical work. 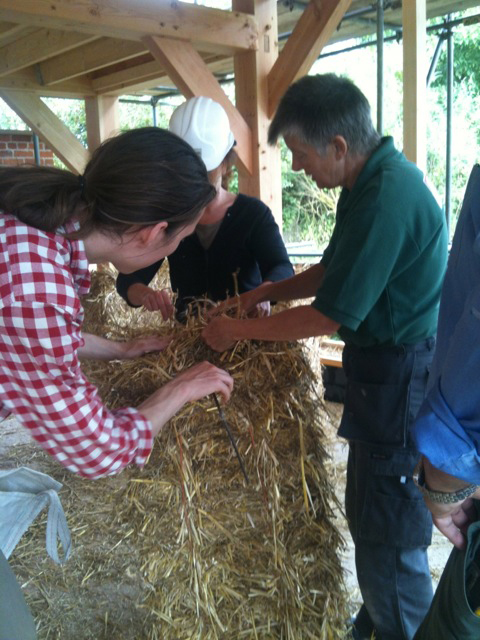 Barbara Jones from Straw Works examines the quality of a bale

A Reed Thatch was Chosen for the Roof

The site is very close to the Norfolk Broads and Fran discovered that reed thatch was being cut a mile away.

She describes this as too tempting: “Yes, it's just a very good roofing material. It's very durable. It's got a natural insulation value so there was no reason not to use it. I mean it's more expensive going with thatch rather than clay tiles or something and that was my extravagance really.”

In order to thatch well, the reeds need to be the same strength, the same length and have the same diameter.

This is partly to do with how well and methodically the reeds are cut, which is why reed cutters are given long contracts to tend a certain patch.

The Airtight Layer in the Roof is Below the Thatch

The thatch is on fireboard which is moisture permeable but airtight. It's taped at the joints so that the airtight layer is just underneath the thatch.

Warmcel – recycled newspaper insulation – then goes in between the plasterboard and the underside of the fireboard. 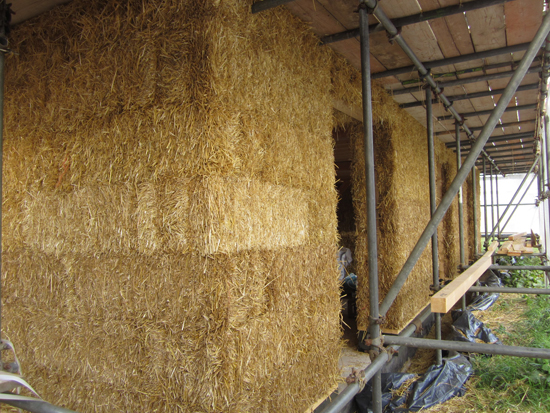 The Floor is a Reinforced Raft

Fran says the connections between the walls and the floor are always tricky to get right and, as this project is aiming for the Passivhaus standard, she opted for a reinforced raft.

While there was a level of compromise here it is quite economical on concrete and it gave Fran the opportunity to employ a local contractor (whereas many parts of this build have needed specialists).

Normally the airtightness layer would be on the inside of the house to avoid warm, moist air from the room going into the wall fabric.

As there's timber inside and the straw is outside the timber frame, in this case it would have been very difficult to make the airtight barrier work well (because there are timber penetrations and quite big bits of timber).

After discussing the best approach with their airtightness expert Paul Jennings, they decided to use the outside layer of render as the airtight layer.

So the concrete slab is the airtight layer in the ground which connects to the lime render on the outside of the straw walls and then to the fireboard on the roof. 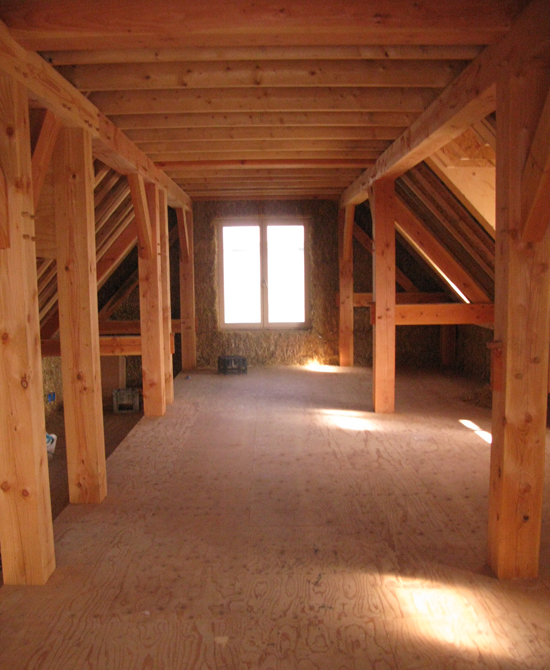 A Theoretical Risk has been Managed

There is a theoretical risk to having the external lime render as the airtightness layer as Fran explains: “Inside you've got clay plaster and that effectively is airtight as well but for instance at the windows where it's all taped it's on the outside, so theoretically you could get moist air going at the junction between the internal plaster and the window and condensing within the straw.”

They are pretty confident this won't be a problem because all the materials are moisture permeable and hygroscopic as well, and the MVHR ventilation will be operating at the coldest times.

Moisture monitors will also provide on-going data, so should any issues arise they can be addressed.

As the lime render is the airtight layer, any cracks that appear could affect the airtightness and thus the energy efficiency of the house.

However, this is just part of using these materials – these cracks will need to be repaired. Fran is expecting this at the end of the drying out process but is not sure how often the maintenance will be after that. 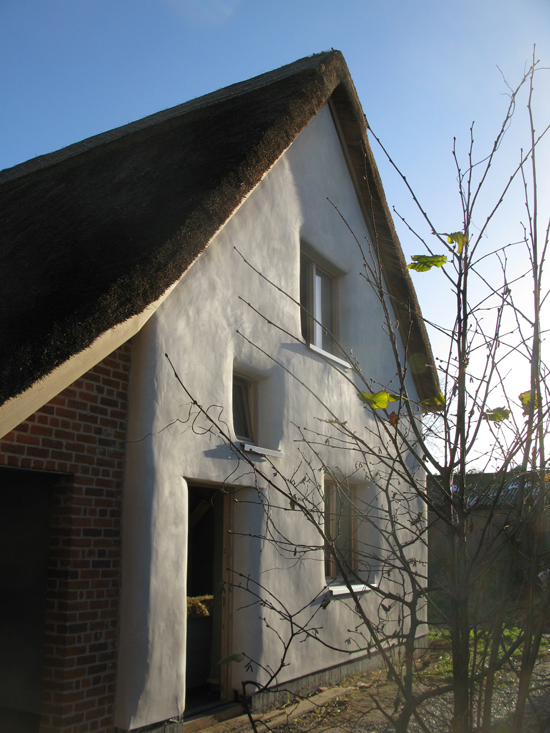 There's a Role for an Airtightness Geek!

Working with these kind of materials and trying to achieve high levels of airtightness, Fran can definitely see the need for a ‘very precise airtightness geek person' who has a close eye on all the details as the build progresses.

This could develop within building firms or be a role that is taken on by a broader group of people.

Prepare for the Key Moments

There are certain key moments where you've got to be absolutely spot on, so find out where these are.

Planning for those moments and making sure that there are the right people around at the time will stand you in good stead.

While Fran knows that there are always ways to cut costs, she derived great pleasure on this project from being able to work with people who she knew were going to do a really lovely job.

Although she may have paid a little bit more it's been worth it and she still believes it's been reasonably economical given the materials used.

Look carefully at what people have done in the past and trust your judgement about them.

For work like this Fran is not in favour of endless competitive tendering. On the whole she's selected people who she enjoys working with and who charge a reasonable rate for what they do.

Passivhaus is a Language We All Understand

The first air test of Fran's house recorded a figure of 0.9 air changes per hour.

She still hopes to meet the Passivhaus standard: “I'd really like to certify it because it's a language that we all understand. Either you've achieved it or you haven't. If we don't achieve it, that's okay, we'll have got very near it and the difference in the building performance between not quite achieving it and achieving it is really quite small. It's just very exciting for me to have this house and this opportunity to live in it.”

Download a transcript of the interview with Fran Bradshaw.

Have you managed to incorporate natural materials in your project? And if not, why?

Google+ Hangouts are Back for 2014

This year we're holding more online debates, which will focus on various aspects of building a house. There's no level of entry! You just have to have opinions and want to get involved.