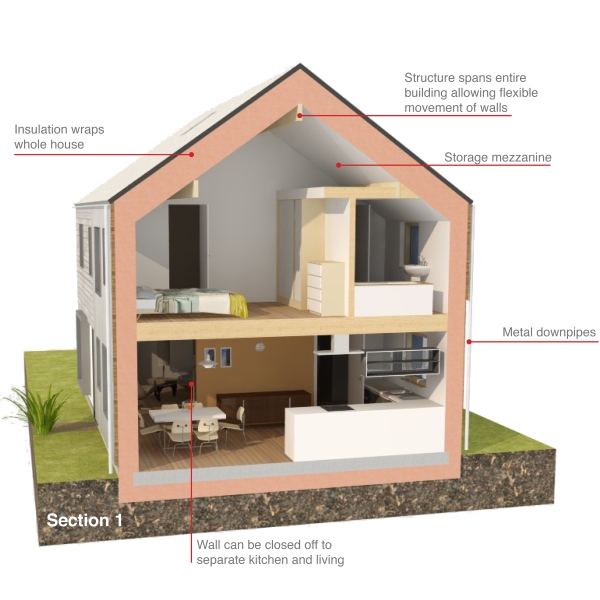 HPH024 : Designing Buildings That Are Radically Sustainable Yet Elegantly Simple - with Jonathan Hines from Architype

Jonathan Hines from Architype explains the concept of eco-minimalism and also the very different approach that guides them as a business. We discover how this design philosophy has helped shape an exciting new scheme of 150 Passivhaus homes for the village of Kingstone, Herefordshire.

On the day this podcast was published the development – in conjunction with ArchiHaus – was granted planning approval! N.B. Our interview with Jonathan was recorded on 20th March 2013. 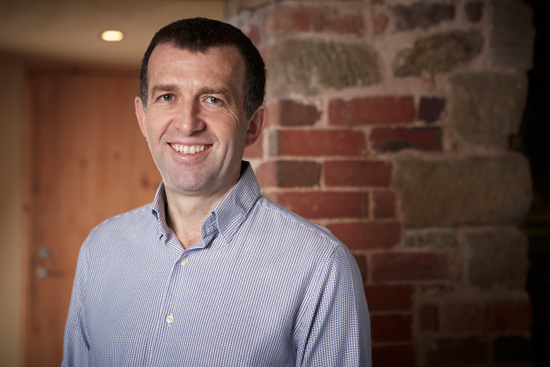 Jonathan has been a director of Architype since 1989 and his life-long focus has been on achieving sustainability through design.

Jonathan explains that Architype's approach has always been to try and keep buildings simpler in order to make better spaces and achieve higher standards of energy efficiency. Whereas many architects encourage complexity and engineers look to technology for solutions, an eco-minimalistic approach is about making buildings as simple as they can be. Jonathan stresses that this does not mean boring. At Architype they want to make their designs elegantly simple as well as radically sustainable. It's about simplifying things down to what works best and letting the buildings to do all the hard work in terms of being at one with the environment.

Far from being the easy route, making a building simple takes longer. It is a process of continually reviewing the designs and questioning if they are simple enough. Are there elements that can be taken out to make the building work better? Jonathan mentions Architype's early days of Segal Self Build. This was a system of construction, devised by Walter Segal, that was all about paring down construction to the basic elements and keeping it simple in order that people could self-build it themselves. Architype's roots have always been in understanding simple detailing and keeping the form of the building functional but also beautiful.

Jonathan believes that people have a higher aspiration for comfort in their homes than they did 50 years ago. Regulations also demand greater efficiency and year by year there is increased awareness about the wider sustainability of materials.

As one of the early adopters of the Passivhaus Standard in the UK, Jonathan says that it offered a logical framework to do what they were tending to do anyway. Instead of being guided by intuitive assumptions it provided rigorous analysis, discipline and a quality assurance process in terms of design and construction. It is a tool that actually helps them to achieve things. 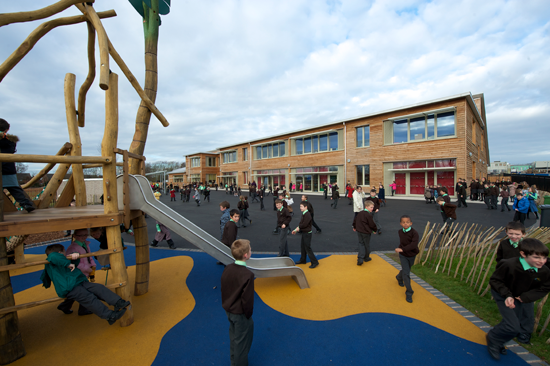 One of Architype's schools that meets the Passivhaus standard

Jonathan explains that Passivhaus can be applied to any type of building. People sometimes get confused by the word ‘haus' and think it must only apply to houses, but its translation from German means ‘building'. Amongst Architype's Passivhaus projects are four schools, a major research building for the University of East Anglia, a church in Sheffield and an Archives and Records Office in Herefordshire. In Germany people are doing Passivhaus fire-stations, hotels, hospitals, etc.

Sticking to a Budget is Just a Discipline

If you think a project is going to cost more then the chances are it will! Architype has always delivered sustainable buildings within tight and standard budgets. Jonathan gives the example of the UK's first BREEAM ‘Excellent’ primary school (for Wolverhampton City Council) which was created with no extra budget. It was achieved by keeping the form of the building simple, the section simple, the detailing simple, the window arrangement simple and so on.

With the exception of one or two smaller scale developers Jonathan believes most big house developers aren’t particularly interested in improving design quality nor sustainability because they can sell what they produce already (as there's little choice in the market).

While a lot of construction in the UK is still done brick by brick, for many years Sweden have been building their houses in factories. It offers many advantages including driving up the quality of the finished product and minimising the amount of time needed on site. In partnership with retired Swedish businessman Lars Carlsson, Jonathan has set up a new company called ArchiHaus which aims to bring UK house building into the 21st Century. From first principles all houses will be optimised for Passivhaus, including the site layout. Then the houses will be prefabricated in a new house factory that ArchiHaus intends to establish. 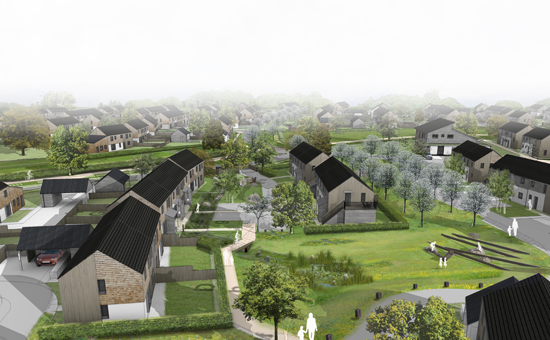 The Scale and Form of New Housing Must be Appropriate

Jonathan talks about this new development in a part rural Herefordshire, where there is a big housing need but where it's challenging to find appropriate sites. He thinks people generally don't like new houses because what is on offer is high density,  suburban, poor quality and not appropriate for a rural site. Their approach aims not only to be Passivhaus but also higher quality in terms of design of buildings and landscape.

The Landscape For This Development Reflects its Rural Setting

After doing a study of typical Herefordshire vernacular architecture and the character of the Herefordshire landscape, Jonathan describes how they then set out to reinterpret that in a modern contemporary way. Instead of creating a suburban character site with wide roads, kerbs, pavements, fences and parking spaces etc. they designed a layout of lower density, with lanes that wind through a landscape of hedgerows, swales, ditches and orchards. This will make it feel completely different to a normal housing development. It’s also got generous areas of shared open space and allotments areas for food growing. 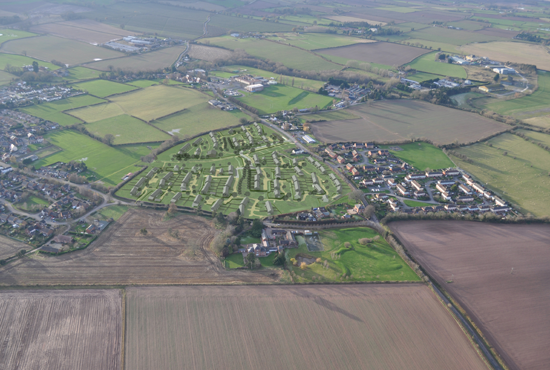 A typical vernacular building in Herefordshire tends to be shallow in depth, wide in frontage and with a roof running along the length. On the other hand most developer houses seem to be narrow in width and deep in plan, which means there is far less daylight getting into the depth of the house. After conducting a Passivhaus analysis it became clear that the best approach was with a slightly wider house that gets more solar gain and better daylight. Jonathan remarks that the traditional vernacular form and the Passivhaus optimised shape actually have a very strong synergy. He doesn't find this surprising because old vernacular houses were built to maximise their relationship to the environment.

Contrary to the perception that comes through many house developers, Jonathan's experience with self build clients is that they tend to like airy spaces, slightly higher ceilings and a more open plan feel, with modern materials and modern detailing. Through programmes like Grand Designs he thinks that people have increased their awareness of what design quality actually is. 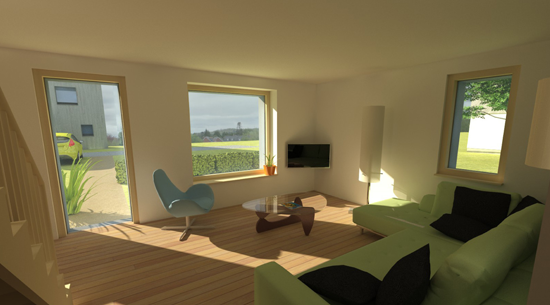 Jonathan mentions RIBA's Future Homes Commission report from 2012 where they found that although people liked the idea of a modern house they tended not to buy them because what they saw in them was of poor architectural quality. So they end up buying a Georgian or Victorian house, which can offer them light and airy spaces, high ceilings, good sized windows, etc. However these old houses are cool and draughty and are going to cost a fortune to heat. This is because the architectural qualities there outweigh the practicalities. So Jonathan says: “If we can combine the practical things of energy efficiency and lower running costs with good architectural quality then we are on to a winner.”

Striving to Create Better Buildings has Attracted the Best People

Throughout Architype's nearly 30 years of practice they have always been exploring new ways of doing things, from trying to find more sustainable ways of building and constructing, ways to save energy to looking at different materials that can be used to create more beautiful buildings. This drive for better buildings has attracted people who are personally committed to sustainability and design quality and actually believe in the ability of design to do that.

We Know the Origins of All the Materials we Use

Jonathan explains that over the years they have tried out lots of different materials. Some worked well, others were more difficult or appropriate only in certain situations. Now they have honed a fairly robust palette of what they’re confident are renewable and sustainable materials. This includes timber, insulation made from recycled newspaper, a range of mineral and organic paints and stains, and floor finishes in lino and rubber. 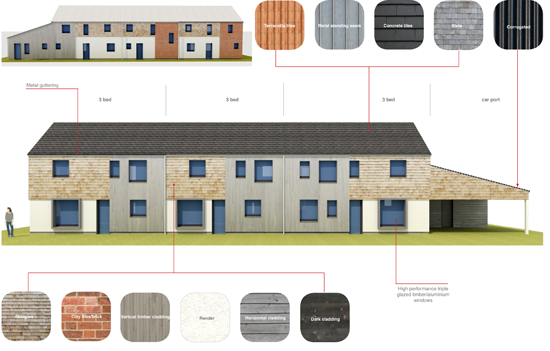 Buildings are Better at Saving Energy Than Generating it

The Kingstone development does not encompass any renewables and Ben asks Jonathan whether that was intentional. Jonathan replies that well designed buildings are really good instruments for saving energy. He does not consider them particularly good generators of energy. For example, photovoltaic panels are often perched in funny places behind chimneys or facing east-west or even north sometimes. This is because people have managed to get a grant or have got a feed-in tariff and they’ll get some return on it.

Renewable Energy Should be Generated on Efficient Scales

If the imperative is to save carbon across the whole world, then every panel that's put up now should be in the most optimum position available. Jonathan would much rather see solar arrays on the ground in fields, where they can be cleaned and maintained properly. If there's a separate inverter in 5000 houses, when something goes wrong the householder is probably not going to fix it. On a community scale or even at a regional scale renewable energy starts to make sense. Similarly with wind energy, big wind turbines in the North Sea are preferable to little ones perched on buildings, which don’t go round.

Jonathan compares energy to rubbish – it’s good to recycle rubbish but it’s much better not to create it in the first place. So with energy it’s good to have renewable energy but first to use less of it. 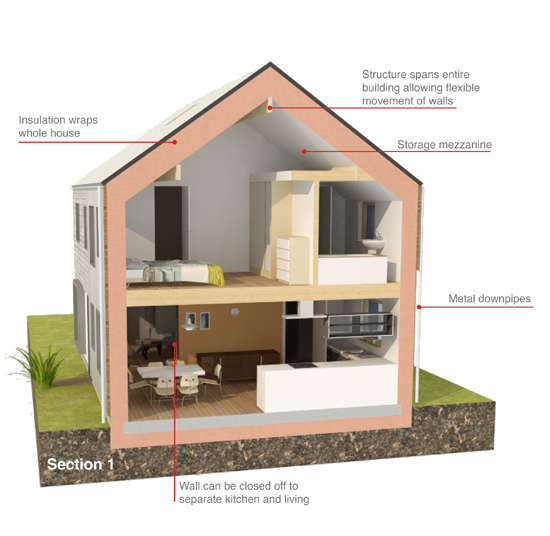 Download a transcript of the interview with Jonathan Hines.

After the success of our first Google+ Hangout, we are organising our next debate on the topic of housing density. Should we focus our efforts on building high or low density housing? If you have strong views on this subject and are already signed up to Google+ we'd love to hear from you. We are in the process of putting together a panel.