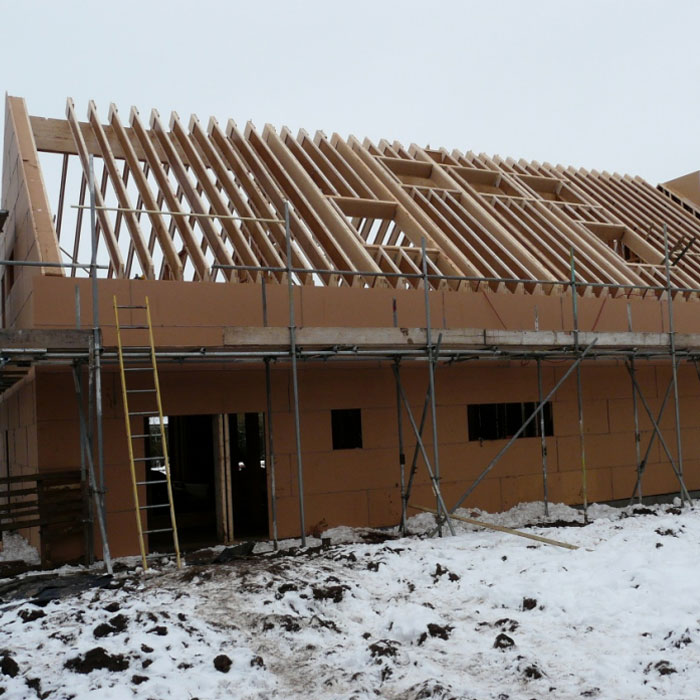 Pat Wilkinson from Touchwood Homes reveals why he decided to build to the Passivhaus standard and there's a resource for young industry professionals who might just be completing their architecture degrees or building training etc.

Pat explains that his family has been in construction for three generations. With his interest in climate change, in the mid 1990s he set about changing his practices to become more energy efficient.

In 1994 he built his first house with I-beams (imported from Sweden), allowing him to build thicker walls without using lots of timber. Pat says this first house has performed very well over the last 15 years, with virtually no heating requirement.

Pat talks about writing to (UK) MP Mark Prisk, who is chair of the Green Construction Board, and then speaking to one of his colleagues, who didn't seem to realise that we have the capability to build low energy houses right now. Pat also suggests that large construction companies have little interest in building energy efficient homes because it might reduce their profit margins.

What Makes These Houses So Energy Efficient?

Insulation and airtightness are the two most important factors of any energy efficient building – this way it holds in the heat. Pat describes how a ventilation system will also be necessary due to the airtightness. The Passive House Planning Package is a vital tool in designing and specifying your house correctly.

Houses That Meet The Passivhaus Standard Can Be in Any Style

Pat says that you can build an energy efficient house to look like whatever you want it to look like. It could be a barn, a stone cottage or a Tudor hovel! However, Pat believes that modern architecture is very good and it's what we should be building now, rather than repeating styles from the past. Ben explained that he was still drawn to historical buildings and that he doesn't rate a lot of the new builds that he sees, stating “they don't feel right.”

One issue you must overcome when buying a house is knowing what you are buying. Pat talks about new-builds he has witnessed with about 50mm of insulation. He wonders how that can comply with building regulations. Pat's buildings generally have 300mm of insulation in the walls. The trouble is the consumer rarely gets the insulation checked before purchasing a house.

Pat gives examples of buildings that he has constructed where the maximum extra cost is 10%. On a recent project he says the extra cost was nearer 4%. Over time as components, such as triple glazed windows, become more common that difference could even be eliminated.

Knowledge Is The Key To Any Build

For anyone planning to self build, Pat suggests reading as much as possible. German and Scandinavian books often have excellent advice about energy efficiency.

Pat says that very few people have the skills necessary to build to the Passivhaus standard. He advises choosing your contractors carefully, telling the story of a plumber who was installing solar panels and didn't really have enough knowledge to make them work!

Great Minds Plan For The Future

Ben Adam-Smith thanks Pat for his recommendation to use the AECB website and forum to get trusted information on sustainable building. If you have recently qualified as an architect, a builder or a designer etc. in the UK, then the AECB is looking for forward-thinking individuals to join them.

Download a transcript of the interview with Pat Wilkinson.

If this is the first time you have heard of the Passivhaus standard, Ben Adam-Smith recommends going to read more about it from the Passivhaus Trust. This will give you far more detail than we could ever cover in the podcast. The House Planning Help Podcast aims to give you a general feel for it.

Will Homes Built to a Low Energy Standard, Such as Passivhaus, Be Worth More in The Future?

Ben Adam-Smith phones 10 estate agents (real estate brokers) in the UK, only to discover that 8 out of the 10 had not heard of a low energy standard, such as Passivhaus. Ben also wondered why energy isn't a key consideration when buying a house, when we seem to do it naturally with cars (selecting a model which achieves the highest miles per gallon).

They recently featured an article on Howe Park, which achieved record levels of air tightness. The article suggests it could be the world's most airtight house! Pat Wilkinson was the timber frame specialist on this project. Unfortunately these tests were not completed until after Ben interviewed Pat.