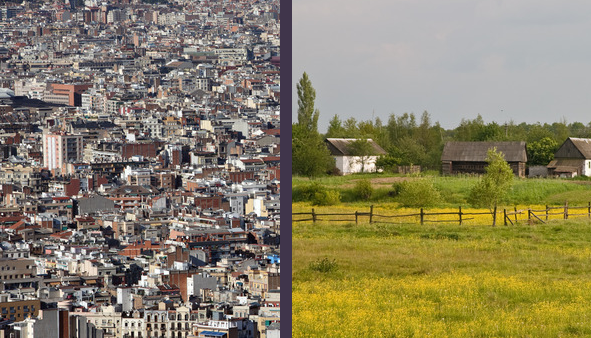 When I started the House Planning Help website, it was partly because I didn't like the way my local area was changing. I felt powerless to do anything as large-scale developers put up apartments close to where I live, boosting the population in quite a short space of time. For a historic market town, these nondescript blocks seemed out of place, the wrong scale, and I was convinced that it changed the mood of the area.

However, as I've researched more into the choices available to planners I suppose I realise that there are no easy solutions. If you are going to build new houses you have to put them somewhere!

It was during my chat with Mark Brinkley, when he suggested that high density housing had some sustainability benefits, that I became intrigued. Where would I put new houses if I had to make that call?

What I'd like to do is keep all the green spaces, which technically are protected by green belt status anyway (fingers crossed on that one), whilst at the same time not flooding the town with new properties. Already I can see I'm not very good at this!

So I wanted to work through what the outcomes might be of choosing a low density and high density path.

Density, in this respect, refers to the number of people that live on a given size of land.

I personally believe that low density housing is the best option for our health. As humans we need to see something green! A low density neighbourhood promises to be quiet and private, and have very little traffic. Is this not the perfect place to bring up our kids?

This is where it's time to throw a spanner in the works. While we do technically have the space for these developments, it does still come at a price (as land is a finite commodity). Once we build somewhere we very rarely hand it back to nature. So urban sprawl will occur with low density housing. Plus every time we build on a piece of farm land we are reducing our food growing potential.

Here comes the second spanner. With each day that goes by, as a world we are becoming more conscious that climate change is a reality. If we are serious about reducing carbon dioxide emissions (and other greenhouse gases), then our drive for energy efficiency must intensify and for that to happen we really don't want to have to use our cars to get everywhere. Low density housing encourages our dependence on vehicles.

Increasing the amount of high density housing we build will reduce the urban sprawl and allow us to keep our beloved green spaces. Hurrah! It's also much easier to walk or cycle to shops and services because everything is closer together. Public transport becomes a lot more effective and viable beyond a certain threshold, too, which in turn saves a lot of energy. Areas of high density housing also tend to have a certain buzz about them, with more in the way of entertainment, restaurants, etc. Another benefit is that infrastructure costs diminish as density increases, because a lot of it is already there (electricity, gas, water, etc.).

As you might expect there are some drawbacks! It may be noisy and lack privacy. An area of high density housing could also be defined by the services on offer. For example, if there are lots of swanky restaurants and expensive boutiques, the chances are families on high incomes will be drawn to that area and prices will go up. Conversely, where it's all budget fast food outlets and discount shops, the dynamic will change again. While nobody has found a connection between high density housing and crime, there may well be a correlation between low income areas and crime. This could be an indirect consequence of high density housing. Also, increasing housing density can create a problem for local schools that may not be able to cope with the new influx of pupils.

Coming back to my hypothetical situation of where to build the houses in or around my home town, it does seem that I would come up against opposition no matter how much thought I put into it. I suppose I would tend towards increasing the town's density (perhaps as they are doing) but do it in such a way that it doesn't feel like it! There are some examples of narrow terraced housing that actually has a higher density than you might think. I'm sure that other clever design is at the heart of creating a good solution.

I do wonder whether we need to think about population growth, too, as part of any housing plans. I'm sure politicians will always want more housing because it is a great way to stimulate the economy, but what are the benefits of an ever-increasing population? Am I a bad person for thinking that we've got quite enough people on this planet already? Plus, there are natural limits to population and we are probably hurtling towards them. As Thomas Malthus wrote many years ago population will we be kept in check by war, pestilence or famine. What's coming our way?

Do you think we should be building more low or high density housing? What is the right mix for creating great places to live?